Two years after the Supreme Court decision, a lawyer who argued the case says it has been unfairly smeared 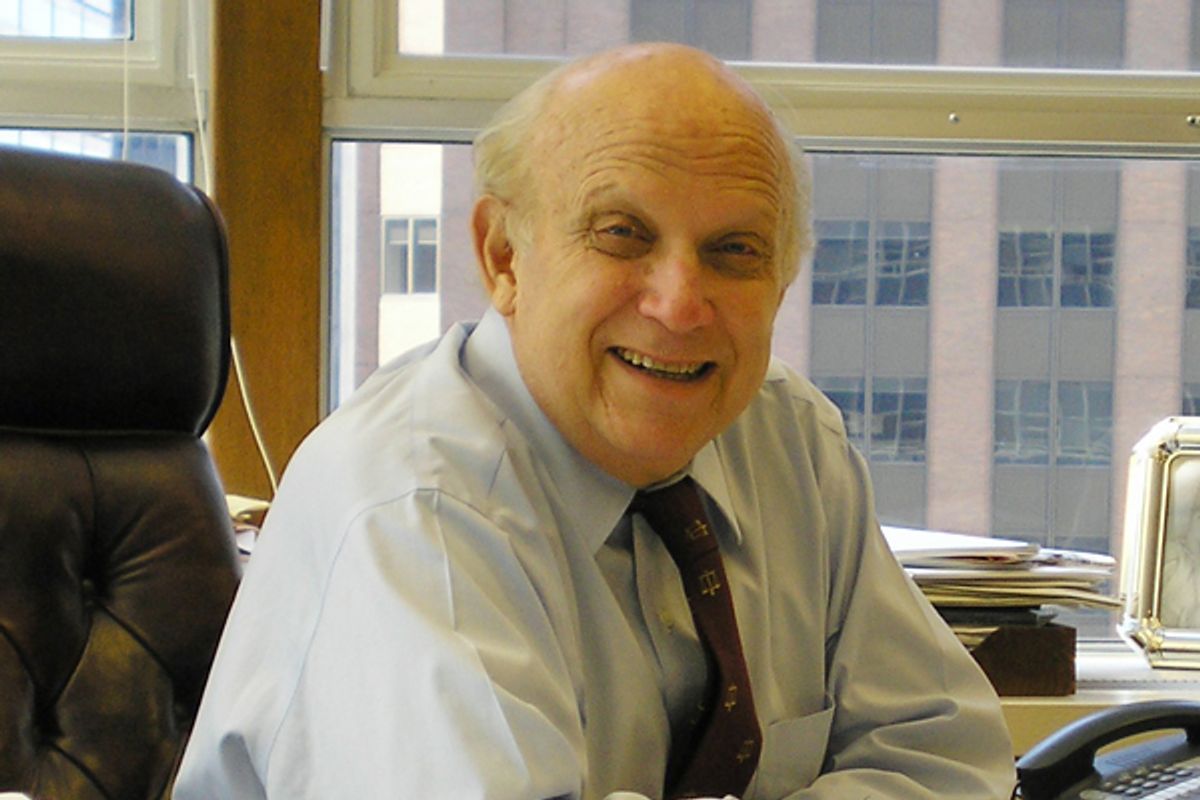 This week marks the two-year anniversary of the Supreme Court's ruling in the case of Citizens United v. Federal Election Commission, which struck down part of the 2002 McCain-Feingold election law.

Never has the ruling been as salient as it is now in the national political discussion. The Occupy movement has taken aim at the decision, blaming it for allowing the "1 percent" to exercise unprecedented control over the political process. Meanwhile, the decision has been widely cited as paving the road for the super PACs that are dominating the Republican primary, now even outspending candidates' official campaigns in South Carolina.

All of which contributed to my interest in a letter sent to the New York Times this week by Floyd Abrams, a longtime First Amendment lawyer who represented Sen. Mitch McConnell in the Citizens United case and argued that part of the McCain-Feingold law was unconstitutional. Abrams has been involved in many landmark cases, notably representing the Times in the Pentagon Papers case in the early 1970s.

In his letter to the editor, Abrams scolded the paper for asserting in a story that a $5 million donation given by casino magnate Sheldon Adelson to a pro-Newt Gingrich super PAC (which used the money to attack Mitt Romney over his work at Bain) had been made possible by the Citizens United decision. Not so, argued Abrams, who believes that the effect of the ruling has been widely mischaracterized.

I spoke to Abrams today to get his take on Citizens United two years later. For an alternative view on the effects of the decision, check out these two articles by election law expert Rick Hasen. [UPDATE: And here is Hasen's very interesting response to my interview with Abrams.]

Can you explain what you think people are getting wrong about the effect of Citizens United?

Well, there are so many things people are getting wrong about it. The one I referred to in the Times came about because many writers in the Times and in the Washington Post and elsewhere have said that funds given to a pro-Gingrich super PAC group by Sheldon Adelson were authorized or blessed or came about because of Citizens United. Citizens United had nothing to do with individual expenditures. It dealt with corporations and unions. You have to go way back to the mid-1970s to find a case that dealt with the rights of individuals, and which did say that individuals could engage in participation in the political process by independent, non-coordinated expenditures to whatever degree they chose.

Isn't there some nuance there, though, that allowed individuals to explicitly say "vote for candidate x or y" through a super PAC group?

No, individuals were allowed to do that all the time. They didn't need a super PAC. Think of the Swift Boat ads [from 2004], the most notorious example probably. They were paid for by individuals. Other significant amounts have been given by wealthy people to outside -- or at least supposedly outside -- groups not controlled by the candidate or the party.

On the issue of disclosure, many newspapers have published articles saying that because of Citizens United we can't tell who is spending money. Citizens United affirmed the constitutionality of disclosure requirements. So, far from being responsible for the public not knowing who is getting what, the court gave its constitutional blessing, as it were, to whatever Congress wants to do in this area. And as it happens, in the particular area of super PACs, we do know who gives the money, unlike some of the organizations totally unaffected by Citizens United. Karl Rove's group, for example.

Right, I was going to ask: Why is it that we now have these 501(c)(4) groups like Rove's Crossroads GPS that don't have to reveal their donors? It seems like a relatively new phenomenon that we now have these groups spending millions of dollars on campaign ads with donations that are not disclosed. How did that come about?

The 501(c)(4)s are not required by law to disclose their contributors. The Supreme Court made clear in Citizens United that they could be. But it simply is not part of the law as it affects 501(c)(4)s. And it is part of the law with respect to the particular sort of 527 groups, such as the super PACs, that do have to [disclose donors]. In any event, none of this has anything to do with Citizens United. In this area, the only relevance of Citizens United is that the court sustained that part of the McCain-Feingold law that required disclosure of certain types of information. That was an 8-1 vote with only Justice Thomas dissenting.

So do you know why it is that we now have these Crossroads GPS-type groups that are very active campaigning?

I think the answer is wholly a matter of timing and politics. At the time that Congress passed legislation with respect to these 527s, including super PACs, it was willing to require disclosure, just as it was willing to require disclosure at the time it passed McCain-Feingold. But the initial thought with respect to the 501(c)(4)s was: They dealt with social welfare issues, and individuals and other entities might be chilled if you disclosed who they were when they gave money to these entities. So we wind up in a situation in which there's really a totally inconsistent legislative treatment of them.

And that's being taken advantage of now more than ever for whatever reason?

Mitt Romney said in a recent debate he thought the current setup is ridiculous in the way that super PACs are separate but still sort of affiliated with the campaigns, and that he thought people should be able to just give as much money to his campaign as they want. What do you think?

Well, I must say I'm moving in that direction. I had thought that the rather Solomonic solution of the Supreme Court in the Buckley v. Valeo decision in the 1970s, when they treated contributions [to campaigns] as subject to greater regulation than independent expenditures, was a pretty wise way to deal with the problem. But as we go through this campaign, there's no denying a significant level of artificiality when we talk about independent expenditures. It is perfectly true that these [super PAC] entities don't speak with the candidates or their representatives because, if they did, they really would be at risk of criminal prosecution. But, as Jon Stewart just pointed out on his program, you don't have to speak. You can be arms-length and still know pretty well what the candidate wants you to do. So I must say I am moving more down the road of saying, "Maybe we should just have the strictest level of disclosure. Not end of month, even, but same day, and via the Internet." But to also let contributions as well as independent expenditures be made.

Some numbers came out last year based on super PAC disclosures and an analysis found that 58 very rich people had given about 80 percent of all the super PAC money on both sides. A lot  of people look at that and say, there's something inherently anti-democratic when you have a tiny group of the super-rich basically setting the agenda for the elections. How do you respond to that argument?

It's a serious argument. And there's absolutely no doubt that in politics as in so many other aspects of American life, money talks. The question, though, is, do we want to deal with issues relating to inequality by limiting speech, or in other ways? The usual First Amendment counsel would be, if the public thinks that too few people have too much power, deal with it directly. Deal with it by taxation. Deal with it via the anti-trust laws. Deal with it via estate taxes. But don't deal with it by saying that people who want to play a role in the political process can't do it.

Citizens United was argued twice. In the first argument the counsel for the government had to concede that McCain-Feingold would ban a publisher, which is a corporation, from publishing a book within 60 days [of an election] advocating the election of somebody. That's an impossible result. Then Solicitor General Kagan, in her argument the second time around, said, yes the law would cover books, but it might well be unconstitutional as applied to books. Then she was asked, what about pamphlets? Then she said, pamphlets are covered by the statute. So my short answer is that I think the way to deal with the sense of unfairness -- and the reality of inequality -- is other means than limiting speech about who to vote for.

One of the things that has always animated my strong feelings about Citizens United were the facts of that case itself. It was unthinkable to me that it could be a crime for a political group to make a movie attacking a candidate for president of the United States. Period.

Many people will respond that, we're so far down the road of power of large corporations and the wealthy people that run them, and given the way that elections work nowadays, there's really no hope of any kind of reform in the tax code or in terms of wealth inequality unless you get some kind of strict regulation of the flow of money into politics. Do you think the campaign finance regime you're advocating puts those people in an impossible situation?

I think regulations of campaign finance have been tried in one form or another, and then another. I don't think they work. And I do think they limit speech. And so, my view is, even if it looks difficult -- and it is -- that the answers have got to be long-term rather than short-term, and not speech-related. I don't think we can constitutionally, and I don't think that we should want as a matter of policy, to make decisions which are essentially, people can't do all the speaking that they can in a political campaign. I don't think we can ration speech.