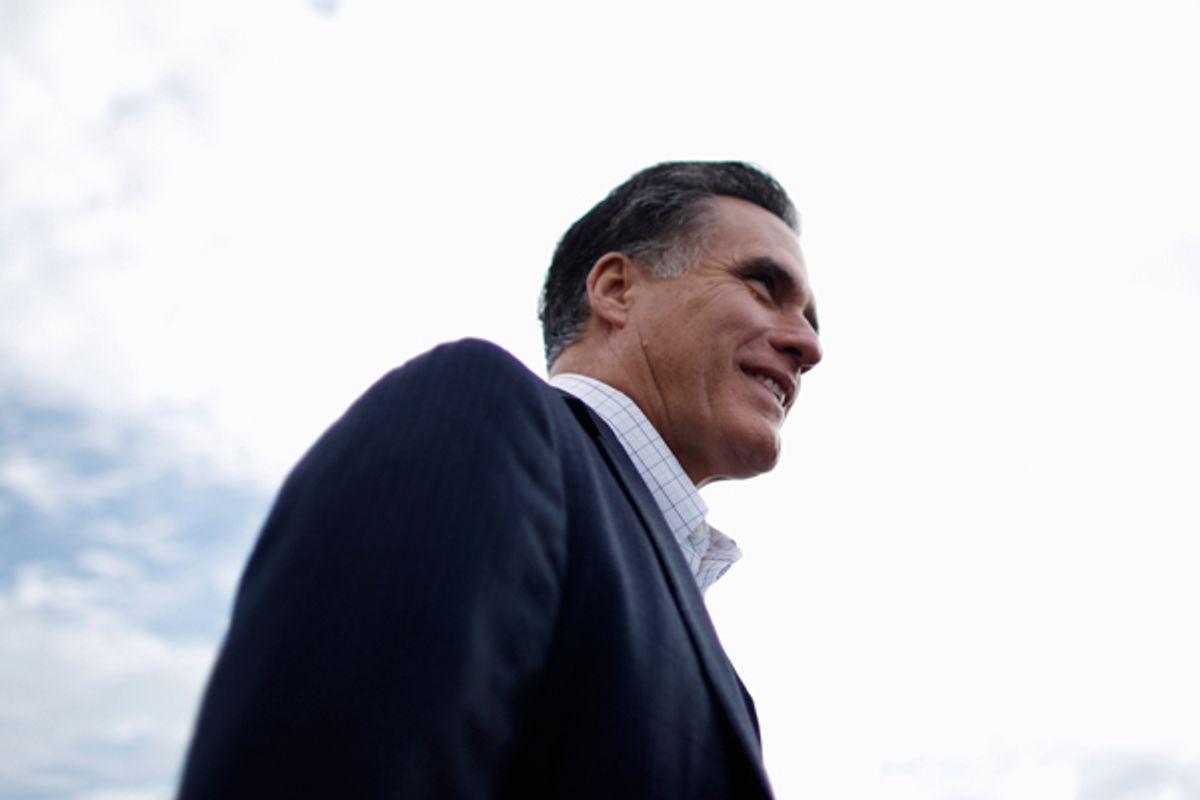 Mitt Romney unburdened himself a little on Tuesday, hinting that he might grace us with his 2011 tax returns sometime in April and sharing some details about his own wealth. His handlers really shouldn't let him loose without a TelePrompter; Romney can't help making gaffes when it comes to issues of money, privilege and class.

As I said last week, one likely reason Romney balks at releasing his tax returns is that he pays a much lower rate than most of the rest of us, because most of his income comes from investments, which are taxed the capital gains rate of 15 percent. And indeed, today Romney acknowledged that his rate is probably around 15 percent because most of his income is investment income, meaning that his money makes money for him, rather than his labor.

It looks like Romney's trying a strategy of softening up the public by previewing some of the disturbing details of his tax returns before releasing the documents themselves. It's also worth noting that April is not merely tax month, but a point at which the GOP primaries are likely going to be already decided, meaning primary voters aren't going to be able to do anything about it if they don't like what the returns reveal.

Romney also shared that he has some income from speaking fees, in addition to his investment income, but he said it's "not very much." In fact, he earned $374,000 in speaking fees last year, and that amount of income alone would put him in the top 1 percent of all American earners. How can he suggest that $374,000 is "not very much?" There may be no better detail to symbolize the privilege of this cosseted candidate.

Still, that comment has some competition for Romney's most clueless remark about wealth and privilege. There's a long list of silly statements: From "corporations are people too, my friend" to "I like being able to fire people;" calling himself "unemployed" – because his money makes him money – and claiming he's worried about "pink slips;" insisting he told his landscaper he couldn't use undocumented workers because "I'm running for office, for pete's sake."

I don't think Romney would make a good president, but I do believe his candidacy can do a lot to help the country, by providing an easy to understand national seminar in the unfairness of our tax policy. It's utterly rigged to favor the rich, with the help (until recently) of both parties. Scrutinizing Romney's career and his earnings will let us understand not merely the inequity of lower capital gains taxes on investment income, but of a particularly invidious category of income taxed at the lower rate because it's considered "carried interest." Private equity managers like Romney receive a share of whatever their firm makes for investors, known as carried interest, and it's taxed at only 15 percent. Theoretically a smaller capital gains rate is justified by the argument that investors risk their money to make the economy strong (a fiction in itself), but the carried interest rule is particularly noxious because equity firm managers aren't risking their own money.

Ironically, it was Romney's father George who set the precedent for presidential candidates releasing their tax returns in 1968. The senior Romney released 12 years of returns, and according to Think Progress, they revealed that he didn't avail himself of the loopholes many rich people use to keep their taxes even lower. Now his son won't even commit to releasing a year's worth – and he's considering 2011 alone because they likely haven't been filed yet and thus they could still be prettified to avoid loopholes and other tax dodges that would be appall many Americans.

Of course, even Romney's self-declared 15 percent rate would be shocking enough. The Obamas paid 26 percent in 2010, according to ProPublica. Democrats have to look forward to a race that pits the middle class Obama, who was still paying off student loan and credit card debt just a few years before he joined the Senate, against the plutocrat Romney. And that's what the race is almost certain to be. Newt Gingrich's superlative night of race-baiting in Monday's debate not withstanding, Romney is almost certain to win South Carolina and the nomination.

I talked about the latest Romney revelations on MSNBC's "Politics Nation" with Rev. Al Sharpton Tuesday: