The captain who wouldn't go down with the ship 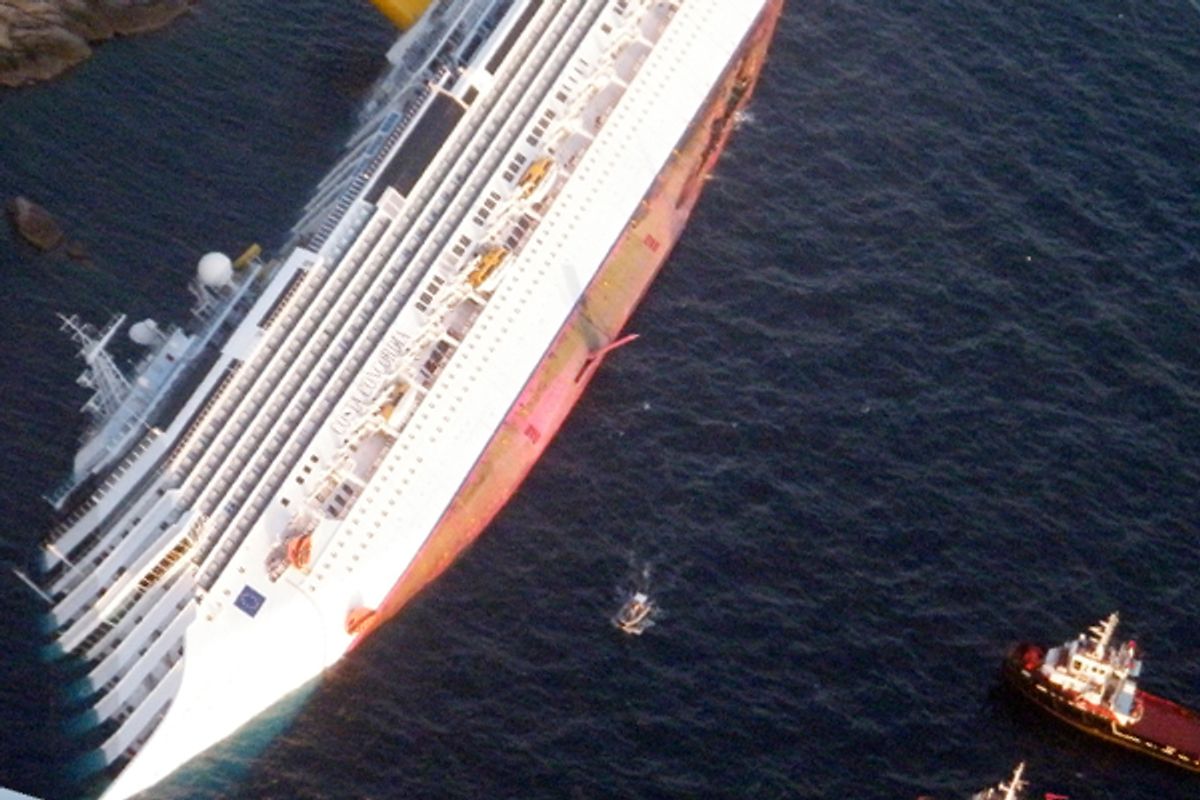 The Costa Concordia aground off the west coast of Italy. (Reuters)
--

Author and lecturer John Maxtone-Graham is known as the dean of ocean-liner historians. He has written 25 books, most of them about ships, and spends more than half his year aboard cruise vessels lecturing to passengers. His latest book, “Titanic Tragedy: A New Look at the Lost Liner” (Norton), arrives in March. In an interview Tuesday, he reflected on the ignominy of Captain Francesco Schettino and the titanic repercussions of the Costa Concordia debacle.

Salon: Start by assessing the captain. Aren’t they supposed to go down with the ship?

John Maxtone-Graham: Captain Crunch? Where do I start? Not only did he make a series of hugely foolish piloting decisions, he left the ship well ahead of many passengers and crew. That is truly unheard of. For a captain to bug out and go ashore is just not done and that is going to brand him forever. He will likely go to prison before he ever goes to sea again.

He does come off as rather yellow. What should he have done?

Crunch should have stayed to the end. That is what Commodore (Edward J.) Smith did on the Titanic. Smith died, and I think “just as well that he did” because he would have been disgraced for life as the collision was completely his fault in every sense. I recall as well the captain of the Andrea Doria (Piero Calamai, an Italian) in 1956. He lived, but he was the last one off his ship as it sank. That is the way of the captain.

This captain should have stayed and helped save passengers. When a ship lists like that and goes out of vertical, the doorways and other interior structures are twisted. This is well known and it will trap people in their cabins. So his duty ultimately would have included searching for trapped survivors himself. But he must also maintain the discipline of the bridge, and send assessment parties out. His main job is to stay at his command post and direct all this activity. There would have been a better lifeboat evacuation if the captain had been at his post and in command. We would not have seen such hysterical images of people thrown into panic and having to pilot their own lifeboats. The captain did not even announce “Abandon ship!” – because he was not there! Just appalling.

How do you assess the crew? They seemed utterly disorderly. Aren’t they supposed to be part of the safety system?

This type of crew is far less adept than the seamen who cleared the Andrea Doria. Those sailors would know far more about what to do than less-experienced seamen who have joined up recently and don’t yet know port from starboard. Same for the Titanic – they were merchant marines and seamen and they were familiar with ships and lifeboats. But of course that era is long gone, the age of the stiff upper lip and “the band playing on.”

Legally an evacuation drill is required within 24 hours after sailing. But all the ships I go on have the drill sooner, sometimes before the vessel leaves port. The reputation of the Italians, frankly, is that they are sometimes a bit casual. But lifeboat drills are not very useful by and large. The people sit in a giant theater and hear a talk and then go outside on deck and perhaps stand around in a life jacket. That is a far cry from a pitch-black panicked evacuation surrounded by dark seas. And this would have been the biggest evacuation of a cruise ship in history. There were 4,000 people trying to get off.

You cannot fault the people for panicking. None of us knows how we would react in such a moment of bedlam. And because there are not many true sailors and seamen on board these ships nowadays, the crew members were trying to get away too.

Are you surprised this could happen in an age of modern navigation?

No. I have always feared that at some point there would be a terrible accident on a cruise liner and while this is the first one of this magnitude I don’t think it will be a last. I am afraid we are going to see other tragedies like the Concordia.

And this ongoing spectacle – it doesn’t go away and it won’t go away. Who could have imagined this scenario? The ship will be there on its side for a long time. Really, if it had sunk out of sight farther out at sea there would have been fewer horrifying pictures and video images and the glaring spectacle of it all could fade a bit more from memory. That will not bring the dead back, and the deaths are tragic. But this way is appears far more tragic in that the image persists every day in television and front pages.

What is the impact on the cruise industry?

It is a terrible black eye, of course, for the Costa line and for Carnival, which owns Costa. Carnival controls the destiny of more than 100 cruise ships.  In a curious way had it sunk at sea it would be less of a P.R. problem – the ship on its side is an iconic image now.

Also, this is a rock-bottom performance on fail-safes for the first giant cruise liner of our times to capsize like this. It is a half-billion-dollar ship. Safety is supposed to be the first concern in this industry. The immensity of all this is undeniable.

But the cruise market is huge and booming and growing – this won’t stop that at all, in my view. People who love the luxury or dislike flying will always book cruises if they can. But of course passengers and others will be more vigilant. You can bet the captains and executives of all the cruise lines are sending out the word that “you are not to divert from your customary course or itinerary for any reason at all.”  It sounds so simple after the fact.

Where do you place this shipwreck in modern maritime lore?

The numbers are far less calamitous than many other sinkings. Yet this episode will be one of the major iconic moments for foundered or capsized vessels. It shows what can still happen at sea, even on a simple cruise in an age of technology. It will be a bookend to Titanic because that was the first great trans-Atlantic liner to go down and this is the first great cruise ship to capsize -- almost exactly100 years later. Every story is already mentioning Titanic.  True, it is a drop in the bucket based on body count. But it will have repercussions far beyond the numbers dead. It will live on in infamy, and for these reasons: Utter command stupidity, horrendous behavior on the part of the captain, sloppy evacuation, and the vessel settling there and becoming an in-your-face icon of what can go wrong. And, the problem of transient crews with little experience in emergencies. They are simply not steeped in the lore and traditions of the sea – how can they be?