The unlikely threat to North Korea

Long dismissed as a playboy, Kim Jong Il's eldest son has become an outspoken and dangerous critic of the regime 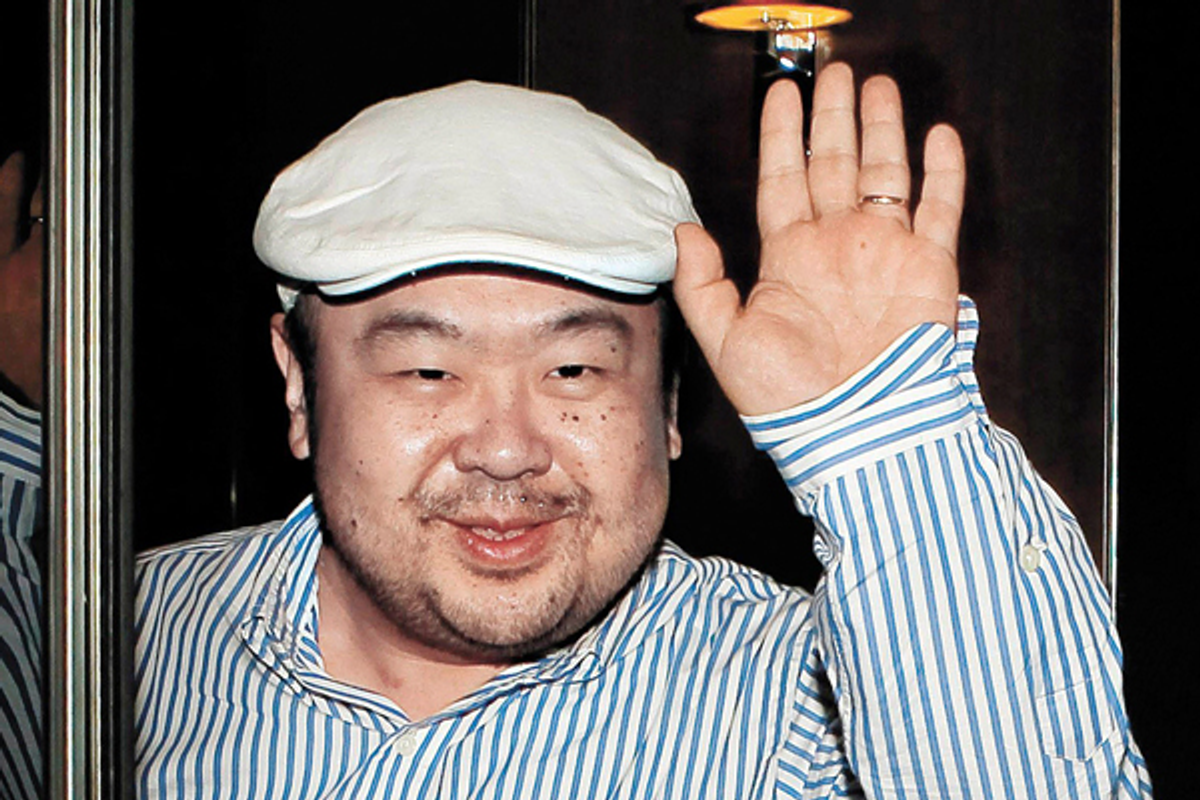 WASHINGTON — North Korea faces the danger of an unguided missile strike, aimed right at the center of power from a direction both near and far.

That would be the newly installed supreme leader's elder half-brother, Kim Jong Nam, who has made some skeptical comments about the weakness of the bloodline that show an unusual insight into what’s going on in Pyongyang even though he’s a few thousand miles away.

The wires are abuzz with news of a soon-to-be-released book based on emails and interviews between Kim Jong Nam and a Japanese journalist Yoji Gomi over a seven year period. In the book, which is called “My father Kim Jong Il and Me,” Jong Nam reportedly said that North Korea is bound for collapse and called his half-brother, Kim Jong Un, a figurehead.

What “a joke to the outside world,” Jong Nam is purported to have said of the ascent of Jong Un, whom he admitted he has never actually met. More seriously, Jong Nam predicted, “The Kim Jong Un regime will not last long” and “without reform ... the regime will collapse."

The ruling elite in Pyongyang, the ones who are really in control, must be wondering what to do about a problem like Kim Jong Nam, a man who is, it seems, unafraid to speak his mind from where he lives in China.

Jong Nam's forecast is bold; foreign analysts hesitate to speak out so frankly. We’ve been waiting so long for North Korea to collapse, for civil strife to erupt, for the generals and party leaders to lunge for one another’s throats, that it’s now fashionable to predict “stability” -- a word that suggests no idea at all as to what’s going on.

Add to all these hoary perceptions the instant analysis of North Korea as “a failed state” that exists on life-support from China, and you pretty well know all that anyone has to say about the place.

Into this morass of ignorance steps Kim Jong Nam, firing off verbal salvos that are wildly unpredictable, not to mention improbable. Isn’t he risking his neck with casually dubious comments to journalists who find him from time to time near his home in the gambling enclave of Macau?

Could it be that one day we’ll wake up to find that Jong Nam has been mysteriously snuffed out like a few others who’ve dared to spill the regime's “secrets” after fleeing for sanctuary elsewhere?

Jong Nam’s case, though, is indeed special -- he’s got the Chinese on his side. They may not appreciate his odd deprecatory comments to Japanese reporters who’ve found him in the casinos, on the street, even on one occasion in a Macau bus, but last thing they want is the embarrassment of a high-profile killing on their turf.

The notion of getting rid of Kim Jong Nam, however, is not new.

After his mother, actress Song Hye Rim, died in a hospital in Moscow in 2002, the lady who should theoretically have been his stepmother, Ko Yong Hui, is believed to have thought it would be a good idea if Jong Nam just “disappeared” during travels to Europe.

Ko, of course, was pressing for the succession of one of the two sons she had during her relationship, never quite a marriage, with Kim Jong Il, before she too died overseas -- of cancer in Paris in 2004.

By that time Kim Jong Nam had more or less lost out thanks to his profligate lifestyle, revealed in 2001 when he was caught trying to enter Japan through Tokyo’s Narita airport carrying a phony Dominican passport. He only wanted, he said, to take his 4-year-old son to Disneyland, but he never really lived down that incident.

More or less in exile, however, Jong Nam poses a threat that North Korea’s paranoid regime doesn’t need. The regime by now has mentioned Ko, who was born in Japan, a member of a North Korean dance troupe when Kim Jong Il first spotted her, as Kim Jong Un’s mother.

Memories of Jong Nam’s late mother have faded into oblivion, but her only son lives on as a persistent critic who might some day want to be a contender for power.

North Korea’s public-relations machine has no problem denouncing South Korean “puppets,” promising “punishment” for any and all of them and spewing out one unlikely tale after another about Kim Jong Un’s prowess.

By now the North even has a sure avenue to foreign audiences through a newly opened Associated Press “bureau” in Pyongyang staffed by two North Koreans.

Presumably they’ve both been well briefed by their North Korean handlers on just what they can file. Assuming they would like to avoid consignment to the gulag, they can be counted on to report statements and editorials as if they were news while ignoring anything to do with the inner struggle for power, much less, horrors, horrendous human-rights abuses that North Korea always denies.

Not so Kim Jong Nam. With his views now on the record, he’s emerged as a font of wisdom and insight into his late father’s fiefdom. His comments so far have been on target -- as damaging as the missiles that North Korea continues to test-fire in a show of power that hides any explosions beneath the surface.