In an Obama age, shows like \"Parenthood\" flatter us into believing race no longer matters -- and avoid hard truth 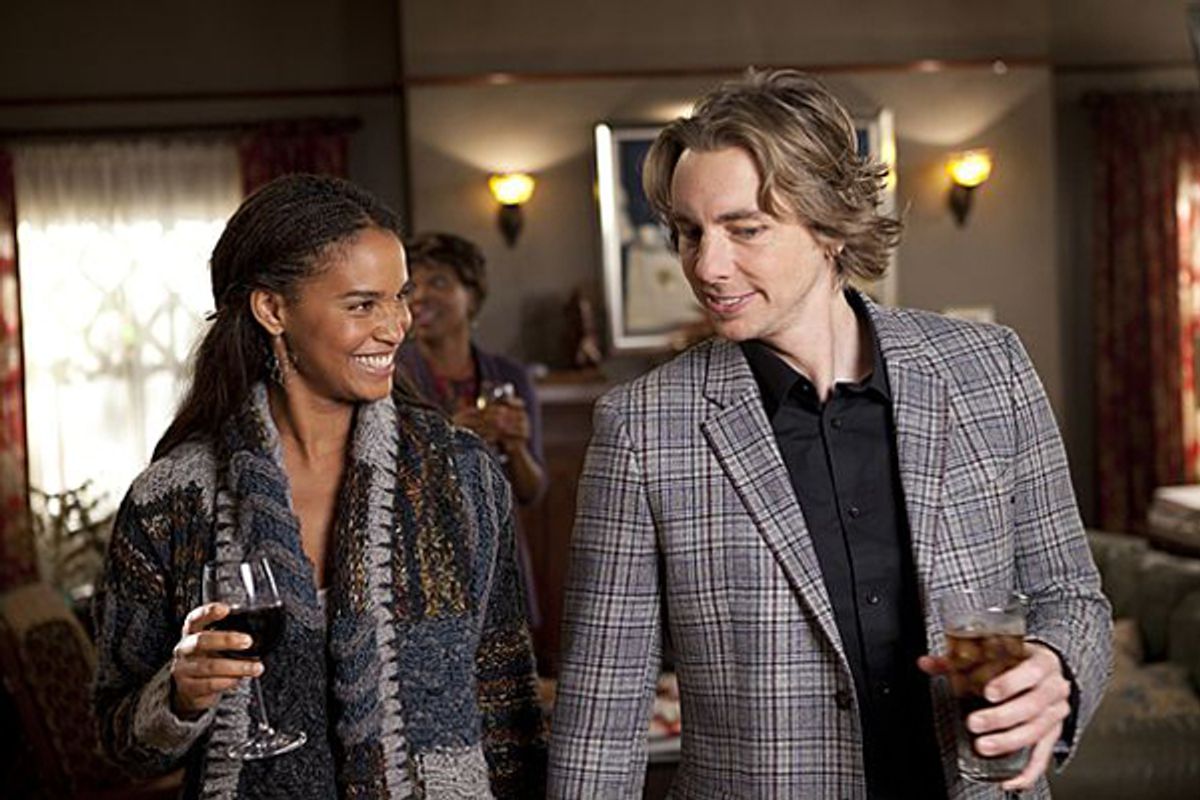 NBC's "Parenthood" is a trick show that people tuckered out by life are eager to believe in. I am one of these tired people. Its bustling mornings, carefully disheveled interiors, and impromptu kitchen dance-parties create the illusion of safe chaos. "Parenthood" knows that for the modern television viewer,  controlled disorder is better than none, for safe chaos tricks you into believing that what you’re watching isn’t totally sanitized. Strategically placed ad-libbing, background chatter and overlapping dialogue combine to slyly convince you of its authenticity -- that not only does "Parenthood" belong to an age of realism and daring and diversity, but it’s helping create it.

It reminds me very much of my eighth-grade teacher who so desperately hoped to be the mythic sage who made a difference, but failed to realize his well-meaning musings about why “black families can’t stay together these days” did little to raise our awareness of anything other than his own desire to seem good. And this is what "Parenthood" does in its broad-stroke coverage of everything that could happen in the life of a modern American family. Since we're all terrified of being different, there is some point in airing things we might still regard with shame: infidelity, moving back with your parents, not going to college, raising an autistic child, and, finally, interracial dating. As the end product of an interracial date, I find this last theme most interesting. On the show, it’s explored in two story lines.

In one, Crosby Braverman (Dax Shephard), the youngest son in the Braverman clan, is reunited with Jasmine (Joy Bryant), an old one-night stand who surprises Crosby with his half-black 5-year-old son, Jabbar. Crosby and Jasmine rekindle their old romance but eventually split apart.

And in the second story line, teenager Haddie Braverman (Sarah Ramos) falls in love with Alex (Michael B. Jordan), a boy so beyond her in sexual energy that a more forced union could hardly be imagined by anyone who spent two seconds in high school. But in "Parenthood," love is blind -- as is a white middle-class family, who, save for one or two lines by characters denying their ability to ever be racist, makes no real reference to the black paramour's blackness. And here is the point that many of us still have difficulty understanding: Pretending to not see race ignores the experiences of people of color and the racism they do sometimes experience. Race-blindness is a well-meaning assertion of a white worldview, one where race is never an issue.

Comedian Franchesca Ramsey’s recent parody video “Shit White Girls Say to Black Girls” is an excellent example of how segregated these realities are. Many black female friends and family members posted a link to the video on Facebook pointing to its hilarious accuracy and mentioning additional comments commonly received -- for example “You’re so smart for a black girl.” Many whites, however, found the video offensive, and Ramsey even appeared on Anderson Cooper's show, "Anderson," in defense of it.

With its black characters' curiously race-less existence, "Parenthood" believes it’s nurturing a helpful attitude. Instead, it supports the kind of backlash that Ramsey faced -- and this is where things get tricky. How does a television show address race in a real way without alienating those who need to hear the discussion the most? (The people enraged by Ramsey’s video, for example.) Those who point out the continuing existence of inequalities, especially about race, will be attacked. In the age of Obama, where few whites witness blatant discrimination, accusations of racism feel like a betrayal. We’re all supposed to be on the same team now, and a prime-time show, naturally, would rather play it safe and flatter viewers rather than risk ostracizing them. Especially this show, built entirely around stroking its audience to sleep.

The best recent example of a show that handled race well is the first season of Louis C.K.’s "Louie." It directly addressed white entitlement, smartly cushioning it within self-deprecating comedy. Every serious observation on race was followed by the most absurd and unsophisticated (and funny) joke. Because Louie was the one who made the mistakes, he could tell you about white male privilege. We would listen because we didn’t feel threatened ... and then he would make a joke about having sex with a fat woman. In this strategic way, "Louie" escaped preachiness.

"All I want to do with these scenes is talk about these things. Air them out," Louis C.K. told me. "I very much doubt if the show will please enough people consistently enough to be a great success. It occurs to me that you yourself may see things in upcoming episodes that you won't like, because I'm playing on every side of the line ...

"I think that what's on TV today has left people too divided, inebriated and expecting only to see shows that agree with them and soothe them. The vast majority will find it too hard to watch something that takes no clear position and satisfies nothing, only opens sores and stirs curiosity."

The complexity of race in America can even be addressed in two lines from the second season of "Treme." Harley, a white street musician in a post-Katrina New Orleans, is robbed at gunpoint by a black teenager. As the teen flees, Harley says, “You’re making a bad choice, son.” The boy stops, turns around, replies, “I ain't your ... son” -- and shoots Harley in the face. In under a minute we’re confronted with the history of white American paternalism and its many consequences.

"Parenthood’s" silence about its black characters’ blackness reflects our genuine desire for things to be different, but also our willingness to ignore the reality of the experiences of people of color in an eagerness to move ahead to post-racialism. This underlines two things: Things have changed, in that there’s a collective desire for equality. But the main problem remains: It is still a white playing field, with white main characters who want to enjoy a world without racism. They're the ones who have decided to move on.

In a clumsy effort to avoid racist portrayals, many TV shows and films have decided to make all black characters superhumanly virtuous or placed them in positions of authority. David Estes, as director of the CIA's counter-terrorism center and Claire Danes' boss in "Homeland," is one of the latest. In "Parenthood," Alex is a high school dropout, in AA and a volunteer at a homeless shelter. He is a positive influence on Haddie’s life to the point of corniness. Meanwhile, career-minded Jasmine, nicely embodying the “strong, independent black woman” role and dancing for Alvin Ailey, no less, is cheated on by Crosby.

This virtue, they think, will distract us from the fact that all the main characters, the ones allowed to be truly human with successes and faults and a range of emotion, are still white. TV is still a white world, one where racism exists, but in small amounts that allow us all to sleep easily.

And in this day and age, even some of the gains black people have made on TV are at risk. As "30 Rock’s" black male characters Toofer, Tracy, Grizz and Dot Com pointed out in Season 4:

Toofer: You will not believe what just happened to me. A guy on the subway just called me a ''biggledeeboo."

Tracy: It's an 18th-century word for dark-skinned Moor. I've learned the word ''black'' in every language, just so I know when to be offended.

Dot Com: Well, I'm sure it was just an isolated incident.

Tracy: I'm telling you, Dot Com, old-school racism is back.

Toofer: How can racism be back when we elected a black president?

Tracy: Barry Obama is the one who brought it back!

Toofer: So you're saying that racism is back because white people no longer feel sorry for us?

Tracy: Hey, something's going on. You know what I saw last night? A Slomin's Shield commercial with a black burglar!

Grizz: Come to think of it, I saw a white judge on "Law and Order" last night.