What a victorious Mitt could get away with

The surest sign that his campaign is starting to get cocky: They’re talking about skipping debates 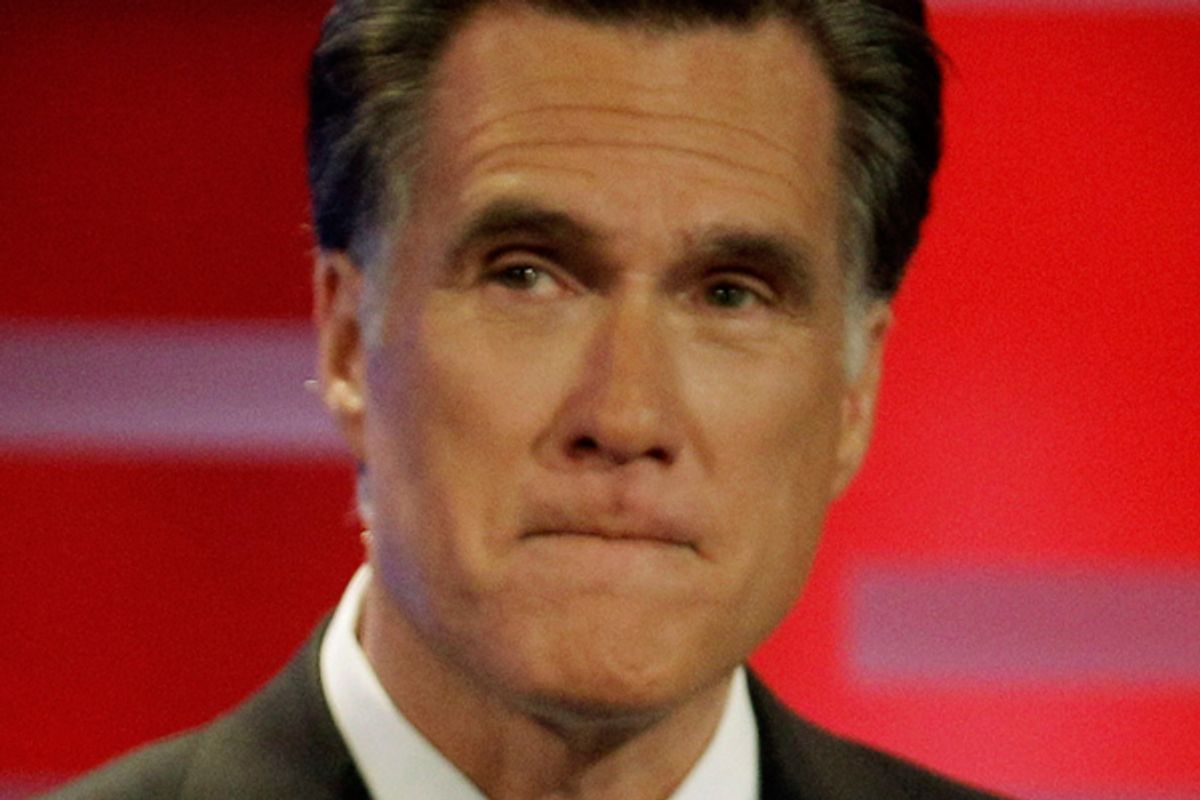 There's plenty of speculation about which Republican candidates might drop out after Saturday's South Carolina primary. Rick Perry, who took his campaign to the state for reasons that remain mysterious and who is showing no life whatsoever in polls, is the most likely to call it quits, while it's virtually inconceivable that Ron Paul will leave the race no matter what the outcome is. Harder to gauge is what Newt Gingrich and Rick Santorum will do if they both fail to catch Mitt Romney.

But if Romney does prevail on Saturday, it will probably push the GOP race into a new phase -- one where it doesn't really matter what Romney's opponents do because he'll have the freedom to ignore them.

This possibility was driven home when one of Romney's top aides, Stuart Stevens, suggested after Monday night's debate that the candidate might not participate in some or all of the debates scheduled for after South Carolina. Currently, two are set for the week leading up to the Jan. 31 Florida primary, with several others on the docket for February and March. Stevens told the Washington Examiner's Byron York that there have been too many debates and that the most critical topics have been addressed ad nauseam. But as York noted, the campaign's real frustration with the debates may simply be that "Romney is facing continuing questions on issues the campaign would rather not discuss."

Which would hardly be surprising: Debates are a risk that no front-runner wants to take and that every front-runner will avoid if possible. Romney himself knows how this goes: When he fell hopelessly behind Ted Kennedy in their 1994 Senate race, he spent the campaign's final days publicly pleading with his opponent to consent to one final debate -- with Kennedy's campaign confidently replying that two debates had been more than enough for the state's voters.

Now Romney has an opportunity to play the Kennedy role. Just posting a microscopic victory in Iowa and a thoroughly unsurprising win in New Hampshire have already done wonders for Romney's standing, pushing him into clear leads in South Carolina and Florida and elevating his national support to a level that was previously out of reach for him. Winning in South Carolina, a state that seems tailor-made for a Romney defeat, would radically accelerate those trends and practically cement his inevitability.

He'd then be able to get away with skipping debates,  pretending his GOP opponents don't exist, and focusing his attention on the general election. Sure, Gingrich and Santorum could stick around and howl at his arrogance, but they wouldn't get much cover from other Republicans, who would recognize the futility of picking a fight with the inevitable nominee. And with Romney on his way to the nomination, Democrats would surely up the volume of their attacks on him, creating another incentive for Republicans to rally around him and for the media to focus on the general election race. In this environment, it would be very difficult for any other GOP candidate to persuade the public that the nomination is still up for grabs.

We've seen past presidential campaigns reach this point. After Bob Dole got wiped out on Super Tuesday in 1988 (losing all 17 states that voted), he vowed to make a campaign-saving stand in Illinois. But George H.W. Bush ignored his attacks and his debate demands and cruised to a victory that finally convinced Dole to give up. Likewise, after pulling off a decisive victory in the April 1992 New York primary (which featured a fascinating moderator-less debate on Phil Donahue's show), Bill Clinton concluded that it was finally safe to treat Jerry Brown like a nonentity. Brown kept his campaign going all the way through the Democratic convention (where he still refused to endorse Clinton), but was swamped in the subsequent primaries, which received decreasing press attention as the political world turned its focus to the Clinton-Bush race.

The chance to shift into "ignore" mode is the real prize that's at stake for Romney on Saturday, and it's clearly within his reach. Of course, the flip side is that if he ends up losing, he'll have no choice but to show up at every debate for the foreseeable future and deal with whatever grief his opponents and the moderators feel like doling out.