After Keystone, Prime Minister Harper fights to keep the U.S. out of the Alberta oil sands debate 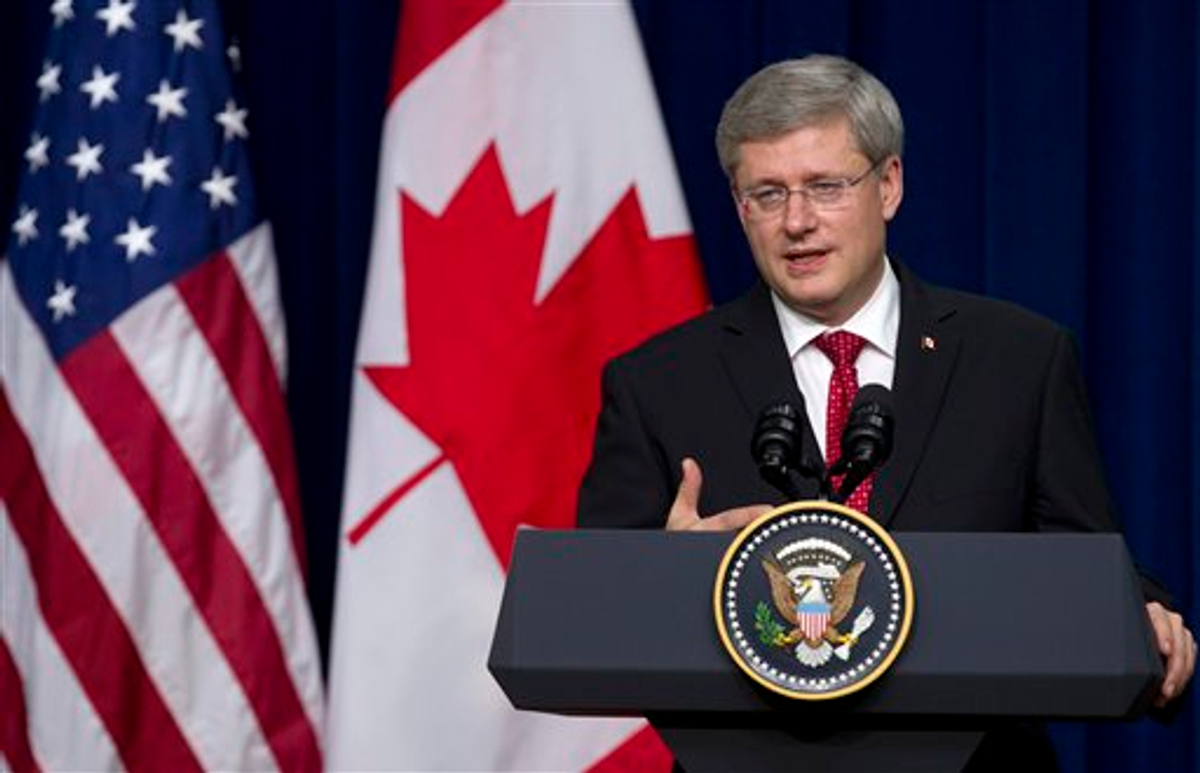 TORONTO, Canada — Prime Minister Stephen Harper has lashed out at American groups opposed to a pipeline that would allow oil from Alberta’s tar sands to be shipped to Asian and U.S. markets.

Harper capped a week-long attack on U.S. environmentalists with a nationally televised interview Monday night, essentially telling American opponents of the proposed pipeline to butt out of Canada’s affairs.

The 731-mile Northern Gateway pipeline would run west from the massive oil sands deposits of northern Alberta — across pristine wilderness and more than 700 rivers and streams — to a proposed supertanker port on the Pacific coast of British Columbia.

Harper accused American groups of hijacking public hearings by a federal regulatory agency, which is assessing the environmental impact of the $6.6 billion pipeline project. Decisions on the development of Alberta’s oil sands should be left to Canadians, he said.

In an interview with the CBC, Canada’s publicly-funded broadcaster, Harper ridiculed U.S. environmentalists: “Certain people in the United States would like to see Canada be one giant national park for the northern half of North America,” he said.

More than 4,000 people have registered to have their say at the National Energy Board’s hearings. In earlier statements, Harper criticizing what he said was “the use of foreign money to really overload the public consultation phase of regulatory hearings just for the purpose of slowing down the process.”

Quick approval of the Gateway project became more urgent for the government after the U.S. postponed a decision on a different pipeline, KeystoneXL, proposed to deliver Alberta’s tar sands oil to refineries on the U.S. Gulf Coast. On Wednesday, President Barack Obama denied a permit for that pipeline, according to Bloomberg News, but said the company could refile if it came up with a more environmentally sensitive plan.

Environmentalists on both sides of the border want to stop Alberta’s booming oil-sands development. They denounce it as “dirty oil,” noting it comes from massive open-pit mining that fells huge swaths of forests, produces millions of gallons of toxic sludge, and increases Canada’s greenhouse gas emissions.

With the Gateway project, they also point to the dangers of oil spills, either though pipeline ruptures or supertanker accidents. To reach the proposed port at Kitimat village, supertankers would need to navigate through 186 miles of island-dotted channels and fjords, and waters known for storms, fogs, and strong tidal currents. The proposal would lift the moratorium on oil tanker traffic on the coast of British Columbia, and 200 supertankers a day would make the challenging journey to Kitimat. The pipeline would transport 525,000 barrels of thick oil daily.

Last week, Harper’s Natural Resources Minister, Joe Oliver, slammed “environmental and other radical groups that would seek to block this opportunity to diversify our trade.”

“These groups threaten to hijack our regulatory system to achieve their radical ideological agenda,” Oliver wrote in an open letter. “They use funding from foreign special-interest groups to undermine Canada's national economic interest.”

“We think decisions about these Canadian projects should be made by Canadians,” Oliver added in an interview with the Globe and Mail. He also took a swipe at “billionaire socialists ... people like George Soros."

The government has been silent, however, about strong opposition to the pipeline from many of B.C.’s aboriginal leaders, who fear oil spills will ruin the livelihoods of their communities. The pipeline is projected on land claimed by B.C.’s First Nations.

The federal government’s outburst against “foreign intervention” was widely denounced. Even the staid Globe and Mail, which supported the Gateway pipeline in an editorial, criticized the Harper government for spewing what “almost sounds like anti-Americanism.”

Many accused Harper’s government of hypocrisy. They noted that Harper, his ministers, and Canada’s ambassador to the U.S. intervened in the U.S. debate about KeystoneXL, doing all they could to get the pipeline to the Gulf Coast approved. Likewise, Canadian companies spent millions of dollars trying to influence U.S. public opinion on Keystone, including the hiring of high-priced American lobbyists.

To then accuse others of foreign intervention in the Gateway debate struck one leading Canadian columnist as “a bit rich.”

Besides, when it comes to foreign interests, none are more powerful than the oil companies lined up to back the Gateway project at the regulatory hearings — China’s SinoCanada Petroleum Corp, Britain’s BP, America’s Exxon Mobil, France’s Total E&P, and Japan Canada Oil Sands Ltd.

Large sums of foreign money are also funding the pro-pipeline lobby. Enbridge Inc., the Calgary-based company proposing the Gateway pipeline, has a $100 million fund from multinational corporations to promote the project, including $10 million from Sinopec, the state-owned Chinese oil company.

Relations between environmentalists and the Harper government have always been strained. War was essentially declared when the government announced last December it would pull out of the Kyoto Protocol, the international treaty to reduce CO2 emissions. Alberta’s controversial oil-sands development has become the main battlefield.