If dismissing Newt is wrong, I don't want to be right

His nasty, race-baiting campaign is tailor made for South Carolina, but Romney's still on top 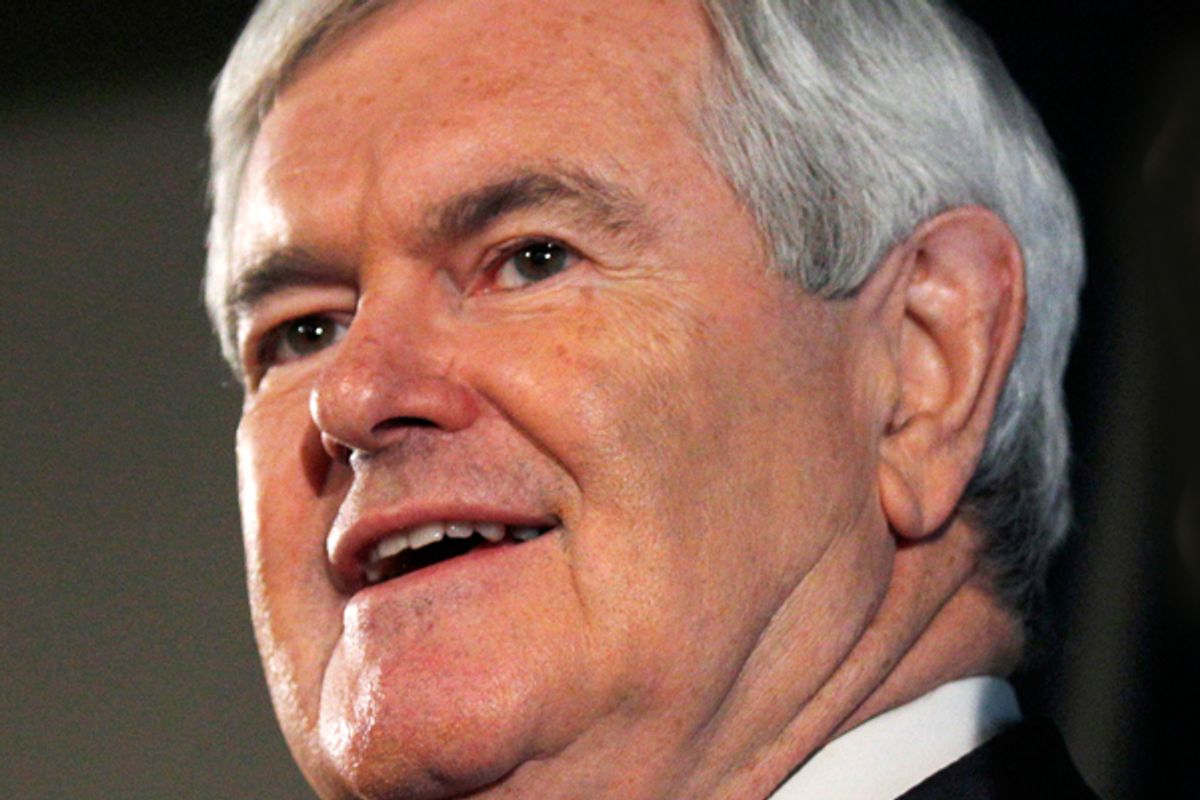 Predictably, Newt Gingrich is rising in the South Carolina polls since he dressed down Fox News' Juan Williams for challenging his nasty comments maligning the work ethic of poor people and associating African-Americans with food stamps. On Wednesday afternoon, a Time/CNN poll found Mitt Romney still leading, with 33 percent to Gingrich's 23 percent – a solid lead, but the former House speaker jumped 9 points, from third to second place, in front of a sagging Rick Santorum.

I know I'm supposed to get excited at this latest twist in the road to nominating Romney in Tampa, Fla., this summer. But why are we surprised that Gingrich is gaining ground? The real surprise has been that the man who finished fourth in South Carolina in 2008, with only 15 percent of the vote, has been leading in the polls since he narrowly won Iowa. Romney's still on pace to win South Carolina Saturday, which would be his third win in a row, almost guaranteeing him the nomination.

Campaign reporters keep resetting the bar for Romney, but Romney gives them reason. First, he wasn't supposed to have a shot at Iowa, given the influence of right-wing evangelical Christians, but when he began polling higher than expected, he put more time and money into the state. That made pundits raise the stakes -- and Santorum's coming within eight votes took the shine off Romney's surprising Iowa victory.

Of course he was going to win New Hampshire, where he has a vacation home, right next door to Massachusetts. But the consensus was he had to win big for it to matter. Pundits on the left and right crowed when he spent most of election night in the mid-30s, but by the time all the votes were counted, he had a strong win with more than 40 percent of the vote.

Now we're in South Carolina, where Romney was never supposed to do well, but after his first two (underplayed) victories, he jumped out to a big lead. When the South Carolina campaign began for real, his numbers began to drop some. It could be that the Bain Capital story and his "vulture capitalism" career, as well as unfolding revelations about his shamefully low tax rate, are taking a toll in this high-unemployment state. Unfortunately, it probably has more to do with Gingrich's unapologetic racial appeals.

I think the real story this week is the splintering of the nation's right-wing evangelical leaders, who have been working hard to anoint an official not-Romney, and who have failed. We keep learning more about the Texas confab where, on the third ballot, Santorum got the endorsement, as Gingrich supporters cried foul. That's not all they've cried foul about. Focus on the Family's James Dobson made a personal attack on Gingrich's third wife, Callista, noting she'd been his "mistress for eight years" and concluded his Santorum endorsement by asking, "Who do you want as first lady?"

Yet while Dobson's candidate won the group's endorsement, it's Gingrich who's gaining steam this week.  Some evangelicals seem surprised. Concerned Women for America president Penny Nance endorsed Santorum early on, and she told the New Yorker's Ariel Levy she expected other evangelical women to fall in line. But many haven't.

"Initially, my reaction to Newt Gingrich and to Callista is that the third wife doesn’t get to be the First Lady," Nance said. "I came at it completely believing that evangelical women would not even consider him, and I’ve been surprised by their willingness to listen and forgive. I attended an event he had here with evangelicals, and there were some pretty tough questions. The most interesting thing to me was not the answers but how he handled them. The old Newt that I knew would not have handled it very well, but this Newt did. He really tried to divine what was at the heart of the question and didn’t come across as rude or arrogant."

But Nance held a hard line nonetheless, “We cannot allow Newt Gingrich or anyone else’s moral failure to be used as an excuse by others for their own wrongdoing and saying 'Hey, I can still be President!'"

I think Gingrich's rise has less to do with evangelical women forgiving him than with his pitch-perfect race-baiting, especially in Monday night's debate. On Wednesday, a South Carolina voter praised Gingrich's performance, telling him, "I would like to thank you for putting Mr. Juan Williams in his place."

Meanwhile, Sarah Palin is trying to make herself relevant again by telling Sean Hannity "if I had to vote in South Carolina, in order to keep this thing going, I would vote for Newt and I would want this to continue -- more debates, more vetting of candidates, because we know the mistake made in our country four years ago was having a candidate who was not vetted to the degree he should have been." It's true, in 2008 one major candidate wasn't adequately vetted – and it was Palin. Her husband, Todd, already endorsed Gingrich, and last week Palin refused to rally around Mr. Bain Capital in the name of freedom, defending Gingrich and Perry's attacks on Romney's "vulture capitalism." Gingrich repaid her kindness by insisting he'd find a major role for Palin in his administration.

But there's not going to be a Gingrich administration. Neither Palin's mischief nor Newt's tour de force of race-baiting will put him over the top. Romney has too much money, and his empire will soon strike back. For months now, the entire Republican primary campaign has been an exercise in trying to believe what you know to be impossible every time someone rises to challenge Romney – that Michele Bachmann or Herman Cain deserved to be taken seriously, that Rick Perry was ready for a national campaign, that Gingrich could shed his political baggage, that Santorum could survive his excessive social conservatism (or his Senate drubbing in Pennsylvania).

Now we're supposed to take Gingrich seriously again. Even if he won South Carolina, the Tea Party capital and the first member of the Confederate States of America, do we really expect that to knock out Romney? Excuse me if I sit this round out. If dismissing Newt's surge is wrong, I don't want to be right.