The NYT's fact-checking question was absurd, but the real problem is that the press has lost its credibility 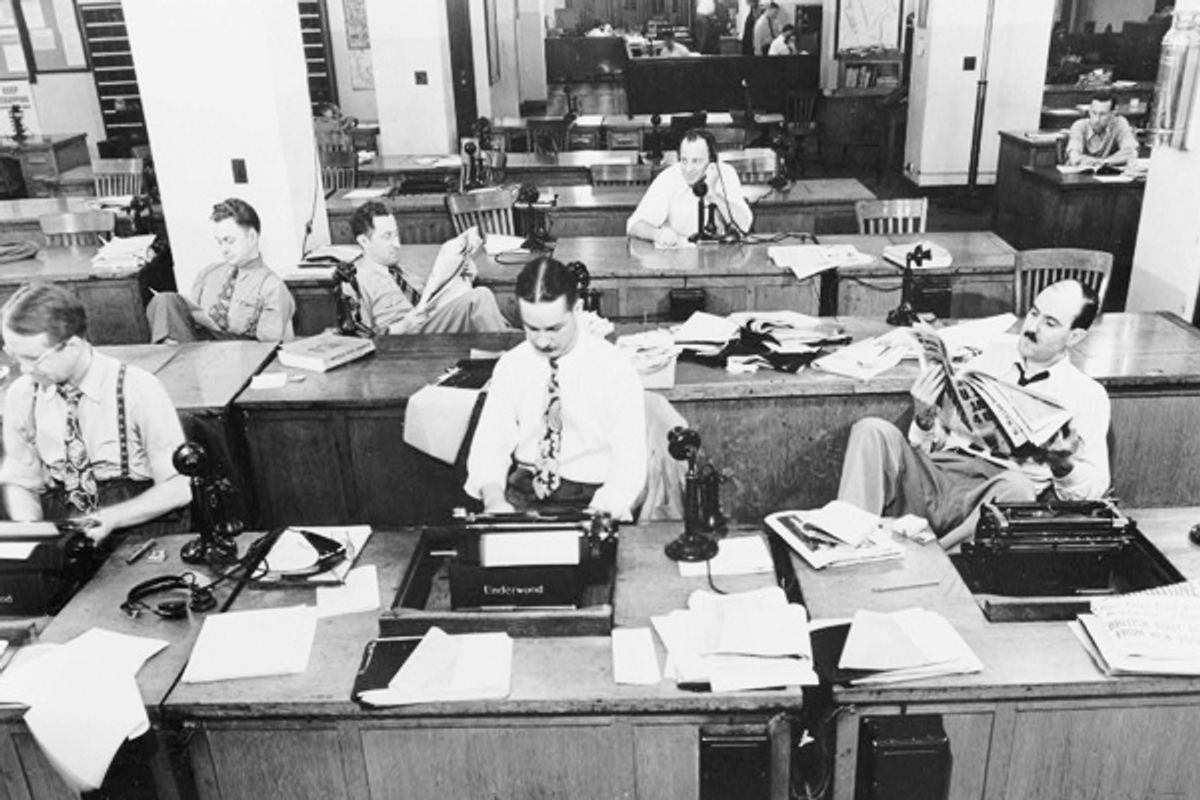 Time was when newspaper journalists prided themselves on being working stiffs: skeptical, cynical and worldly-wise. “If your mother says she loves you, check it out.” I’ve always preferred the unofficial motto of my native New Jersey: “Oh yeah, who says?”

Fact-check politicians? Here’s how H.L. Mencken saw things in 1924: “If any genuinely honest and altruistic politician had come to the surface in my time I’d have heard of him, for I have always frequented newspaper offices, and in a newspaper office the news of such a marvel would cause a dreadful tumult.”

Mencken could recall no such excitement. “The unanimous opinion of all the journalists that I know, excluding a few Liberals who are obviously somewhat balmy,” he added “… is that since the days of the national Thors and Wotans, no politician who was not out for himself, and himself alone, has ever drawn the breath of life in the United States.”

Alas, such attitudes went out of fashion with snap-brim fedoras, smoke-filled rooms and bottles of rye in desk drawers. Today’s national political reporters have attended fancy colleges, regard their professional affiliations as valuable status symbols, hence give every sign of identifying more with Washington courtiers and political professionals than the great unwashed.

To the extent they may share Mencken’s exuberant disdain for hoodwinker and hoodwinked alike, ambitious reporters are well-advised to keep it to themselves. As a career strategy, thoughtful circumspection is advised. The uphill path to a sinecure on “Meet the Press” must be trodden carefully.

Many readers, for example, can probably identify a name-brand journalist such as Judith Miller, who fell into disrepute for parroting Bush administration propaganda about Saddam Hussein’s WMD. But can you name anybody whose skeptical reporting made them famous? No, you cannot.

Columnists have more leeway, but even there it’s safer (and easier) to stick to anodyne topics such as dorky clothes, bad hair, which candidate resembles what character in “Pride and Prejudice,” and who mistreats his dog. To me, it’s significant that an honorable exception like Paul Krugman -- my nominee for progressive MVP -- is not a product of newsroom culture.

So now comes New York Times “public editor” Arthur Brisbane with maybe the most disingenuous question of the year: Should Times reporters be “truth vigilantes”? When politicians lie, should reporters call them out?

Brisbane’s two columns on the subject drew widespread astonishment and hilarity from readers and journalists alike -- partly because journalists love talking about ourselves as much as the average Hollywood starlet. They also drew a sharp rebuke from Times editor Jill Abramson, who insisted that the “kind of rigorous fact-checking and truth-testing you describe is a fundamental part of our job as journalists.”

Abramson gave instances of the newspaper supplying proper context for politicians’ statements such as Mitt Romney’s preposterous charge that President Obama wants “to replace our merit-based society with an entitlement society.” (Wink, wink. Nudge, nudge. Know what he means?) She said that the Times reported that “the largest entitlement programs -- Social Security, Medicare, Medicaid -- were all enacted before Mr. Obama entered grade school.”

Of course, that’s not what Romney’s really saying. Look, as somebody who spent more than a decade waging a quixotic war of words against the New York Times over its role in the Whitewater hoax, the subsequent “War on Gore,” and its shameful (and acknowledged) role in “catapulting the propaganda” that led the U.S. to invade Iraq, I have two observations.

Second, the answer to Brisbane’s real question -- exactly how reporters are supposed to go about calling Mitt Romney a liar -- has no good answer. Because the more forcefully it’s done, the more the GOP candidate’s apt to like it.

Take Romney’s oft-repeated charge that Obama goes around apologizing for America. The Washington Post’s Glenn Kessler did this one to a fare-thee-well, showing conclusively that the allegation is completely false — an absurd mix of misrepresented circumstances, doctored quotes, etc. And it took him 1,800 words.

And who read them? Certainly nobody who’d already swallowed the lie on Fox News, Rush Limbaugh or any of a hundred right-wing websites. So the Washington Post says it’s a lie. Well, they would, wouldn’t they? The Times agrees? Even better.

Romney’s not talking to reporters, but over and through them, seeking not nuanced news stories, but five-second video clips and TV ads. Reporters who ask confrontational questions can be ignored, or worse, made characters in the story. Well-paid operatives can make their editors’ lives miserable.

The uncomfortable truth is that no newspaper today has the power and moral authority the New York Times so thoughtlessly squandered, and it ain’t coming back. Obama will have to defend himself.