In a lazy column that sums up what's wrong with the D.C. press, Dana Milbank urges both sides to just get along 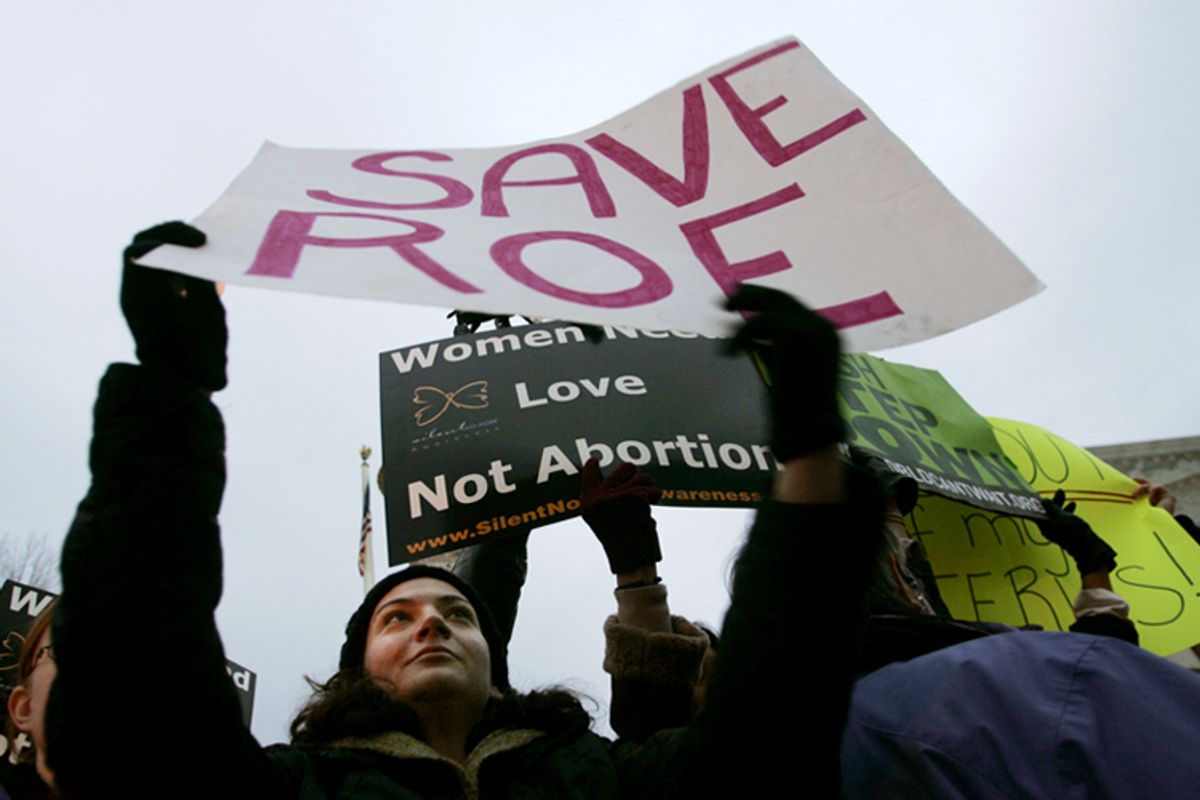 Trish Calamari, raises her sign to block the signs of anti-abortion protesters in front of the Supreme Court Building in Washington. (AP)
--

Last year, states enacted twice as many anti-choice laws as they did the year before. But ladies -- says Washington Post columnist Dana Milbank -- don't indulge in "hysteria" about your right to reproductive freedom. (And yes, he uses the word "hysteria.") He says the pro-choice movement would "be wise to drop the sky-is-falling warnings about Roe and to acknowledge that the other side, and most Americans, have legitimate concerns."

What are these legitimate concerns? Milbank does not tell us. He does, however, amble through the schedule of Washington, D.C., events for the Roe v. Wade 39th anniversary commemoration, and attend (at least I think he did) a single press conference held by abortion provider and author Merle Hoffman. The resulting column has all the hallmarks of everything worth hating about Beltway punditry: Each side is solely represented by the D.C.-based organizations that send out the press releases. It's as if it's all a "West Side Story"-like face-off in which only rhetorical points are at stake, as opposed to the lives of non-professionals actually affected -- in this case, women. And Milbank concludes that if those two groups, both behaving ridiculously in allegedly equal measures, would just compromise and meet somewhere in the middle -- perhaps at a D.C. happy hour! -- he would stop having to listen to them caterwaul.

To say this smacks of the airy privilege of someone who isn't directly affected by the situation is an understatement. As blogger Abigail Collazo put it, "I suppose that’s easy to say when the sky isn’t falling on him." That's not just because Milbank is a man; it's also because he probably doesn't know anyone who can't afford an abortion, can't access one, or was forced through intentionally odious obstacles before getting one. (And if somehow he does, he needs an empathy check.) The same goes for his mockery of Hoffman's position that abortion can be a moral or "life-affirming" choice, in which he adopts a smug posture toward a woman who actually had an abortion and works daily with other women who have too. Somehow, he knows better.

He sniffs that "anniversary observances have devolved into fact-free spectacles that have less to do with abortion than with raising money for advocacy groups on both sides." It's true that organizations have to maintain a sense of urgency to stay solvent, but not all advocacy groups are created equal. Some, like Planned Parenthood, are in the business of providing substantial medical services in addition to legislative and political action. Meanwhile, the anti-choice movement's idea of providing medical care is spreading intentional falsehoods about the risks of abortion and telling women they'll go to hell unless they convert to Christianity.

Milbank has the solution: To stop holding events and "get to work on the one thing everybody agrees would be worthwhile — reducing unwanted pregnancies." Does everybody actually agree that would be worthwhile? Milbank seems to know that they don't, since he actually, correctly, calls out the antiabortion movement -- if they wanted fewer abortions, he writes, they'd stop "throwing obstacles in the way of birth control and make sure it’s cheaply provided as part of preventive care and not blocked by 'conscience clauses.'" But he still chides pro-choicers that "not every compromise means a slippery slope to the back alley," and claims each side has "strong financial incentives to avoid consensus and compromise," instead of acknowledging that the main disincentive is that each side has wildly different ideas about the role of women, sexuality and childbearing.

So let me ask Milbank. How do you split the difference with groups like Americans United for Life and the United Conference of Catholic Bishops that are actively hostile to birth control -- sorry, the "contraceptive mentality"? The ones who are working, one incremental law at a time, toward a ban on all abortions with no exceptions, including the ones that Dana Milbank personally considers OK?

Any real observance of the anniversary of Roe has to acknowledge that although it's the ultimate bulwark, the real operating framework comes from Planned Parenthood v. Casey, the Supreme Court decision that has an even snazzier birthday this year, its 20th. That would be the "centrist compromise" crafted by the court's moderates that opened the door to the restrictive state laws that actually affect whether a woman can exercise the right to an abortion -- bans on public and then private insurance funding for abortion, parental notification and consent laws, waiting periods and more.

As I wrote in a year-end piece, some of the newest and more innovative laws were indeed stopped in their tracks by the judiciary. But some, like bans on later abortions, weren't challenged at all, and some of those legal victories were short-lived. Just last week, the preliminary injunction on a Texas law preventing the state from forcing women to view ultrasounds before an abortion was overturned by a higher court notorious for its far-right allegiance. In other words, no one should take for granted that the legal status quo will remain in place. And that status quo already isn't much if you can't afford an abortion or can't access one.

Wait, I'm sorry, were we talking about actual people's lives? Milbank was just reviewing a spectacle.