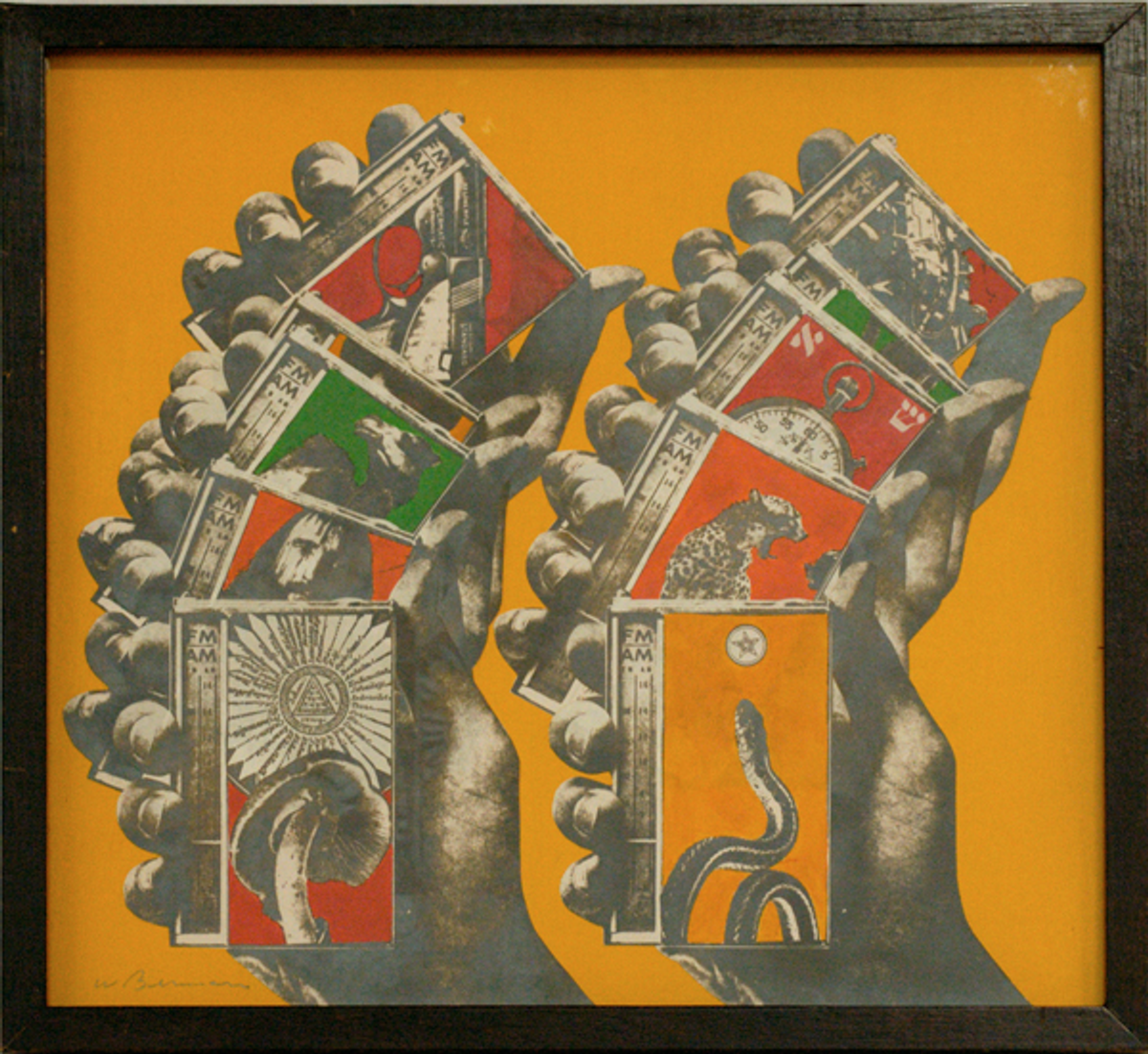 Several decades before AdBusters, there was Wallace Berman and Robert Heinecken.

Hardly anyone knew that these two media-manipulating L.A. hipster artists were intimates, beginning in the early 1960s. But now their relationship has been exposed to the public for the very first time. Naked women are also involved. A lot of naked women. And drugs and booze, but that's another story.

Los Angeles' six-month-long Pacific Standard Time project includes more than 70 exhibitions. But the one I hear most frequently cited as the hottest is "Speaking in Tongues: Wallace Berman and Robert Heinecken, 1961-1976." You can see bits and pieces of their individual works at various PST group shows. But it's most revealing to see a masterfully curated collection of their art and artifacts displayed tightly together at Pasadena's Armory Center for the Arts.

Berman was the shy beatnik mystic, Heinecken the aggressive ex-Marine hippie. But both are known for hacking into media imagery: Berman with his Verifaxed transistor radio collages and Heinecken with his manipulated magazine pages.

And both were very engaged with pornography, much of which is on display at the Armory.

Here's Part 1 of my interview with Speaking in Tongues co-curators Claudia Bohn-Spector and Sam Mellon. In Part 2 we discuss war, lust, misogyny and more about media.

Meanwhile, you can still catch the show before it closes on Jan. 22.

Much of the work in the show is darkly funny; how would you describe Berman's and Heinecken's humor?

Sam Mellon: Well, from the stories we've been told by family and very close friends, it sounds like Robert and Wallace were pretty funny and quick-witted guys. Both shared a unique sense of humor that was wrapped up in intellectual wordplay, trickery, male one-upmanship and -- certainly in the case of Wallace -- the seemingly supernatural.

These weren't guys who would retell the jokes they’d heard at the bar, or necessarily even try to be funny. That would have been far too obvious for them. Their humor operated from the trenches. It was a very intelligent, very male sense of humor that thrived on competition, pranks and unexpected twists. And that sense of humor comes through in the work.

Some of Robert's early magazine interventions, I think, are incredibly funny and playful. He later used his magazine work to address more serious issues, but the early magazines, and even a piece like "Child Guidance Toys," have a dark, ironic sense of humor to them.

Many of Wallace's transistor radio Verifax works often make me chuckle when I look at them! The juxtapositions are so complex and witty, but the humor is never obvious; it kind of creeps up on you. And I think his Verifax collages of corporate CEOs mounting their office desk and proudly propping up a picture that displays a pornographic image are just hilarious.

Wallace honed his unique sense of humor on the streets of L.A.'s Central Avenue jazz scene, hanging out with musicians and hipsters, absorbing their wit and competitive lifestyles. Robert grew up in the military and his dry and deadpan humor was certainly shaped by that. Both used humor in their work to make larger points or to raise deeper intellectual questions.

They were very eager to point out hypocrisy, and I think this often comes across in ironic and humorous ways.

Claudia, in your catalog essay you called Berman and Heinecken "rear-guard revolutionaries" and pre-postmodernists; how do you view their work in today's post-postmodern environment?

Claudia Bohn-Spector: Given today's developments in the visual arts, they can only be seen as pretty visionary for their time. They anticipated by as much as 10 years many of the major artistic developments that would come to dominate the 1980s and '90s. Yet they also retained significant links to the past, to old avant-garde practices that they sought to update and make relevant again, after they had become more or less obsolete after World War II.

But I don't really see them as dyed-in-the-wool postmodernists. Their art is far too deep, complex, sensual and -- in Berman's case -- almost too spiritual to really qualify as such. High postmodernism, for lack of a better term, often has deliberately cold, one-dimensional and even glib and cerebral tendencies that are absent in Berman's and Heinecken's work.

Perhaps it is precisely their depth and intellectual complexity that make them relevant today, and why people want to look at them again and rediscover an art that consciously evaded simple answers rather than programmatically provide them. Berman and Heinecken are really transitional figures and as such very interesting to study, both for what they overcame and what they foreshadowed.

Berman began his career illustrating album covers and Heinecken studied printmaking; how did their early engagement with mass communication influence their attitudes toward it?

Claudia Bohn-Spector: Berman and Heinecken were both deeply intrigued by all aspects of mass communication. Radio, television, newspapers, magazines all held a strong and lasting interest for them. And they both consumed all of these media voraciously, all the time.

What they wanted to challenge, though, was the unquestioned consumption of mass media and the political realities that enabled and, in fact, demanded such passivity and illiteracy. I think what is at the heart of their art is a deep interest in the "mediated-ness" of all information, in the hidden social and political mechanisms, the entrenched interests and the subliminal workings that define contemporary mass communication.

Their intimate engagement with language, and their understanding of how language itself operates and "signifies," was a very helpful tool in that regard, as was their knowledge of visual communication, as printmakers or graphic designers.

Carolyn Peter noted in her catalog essay that Berman and Heinecken both "took advantage of the physical, graphic aspects of the letters they chose as well as the words' linguistic meanings" and "often created tensions between the verbal and the visual that challenged their audiences to think differently." In that sense, might you consider them designers as well as artists in the mode of John Heartfield, or even early Warhol?

Claudia Bohn-Spector: Absolutely. They both had "design" backgrounds, if you will, Heinecken more so than Berman. Heartfield, especially, was a huge influence for him, not just for his graphic skill but also for his political instincts and agenda.

Naturally, Andy Warhol was an influence on both of them, both formally and iconographically. I'm thinking especially of his work with serial, gridded and appropriated compositions, for example. In the end, though, I think that Warhol's influence only went so far, for his "cultural critique" and interest in the mechanisms of "fame" -- even personal fame -- was decidedly more one-dimensional than anything Berman or Heinecken would ever do. Warhol's work doesn't demand the kind of deep reflection and "digging" that Heinecken or Berman's art inspires.