As Gingrich scores with race-baiting, Romney tries redbaiting, telling a voter, "America's right and you're wrong!" 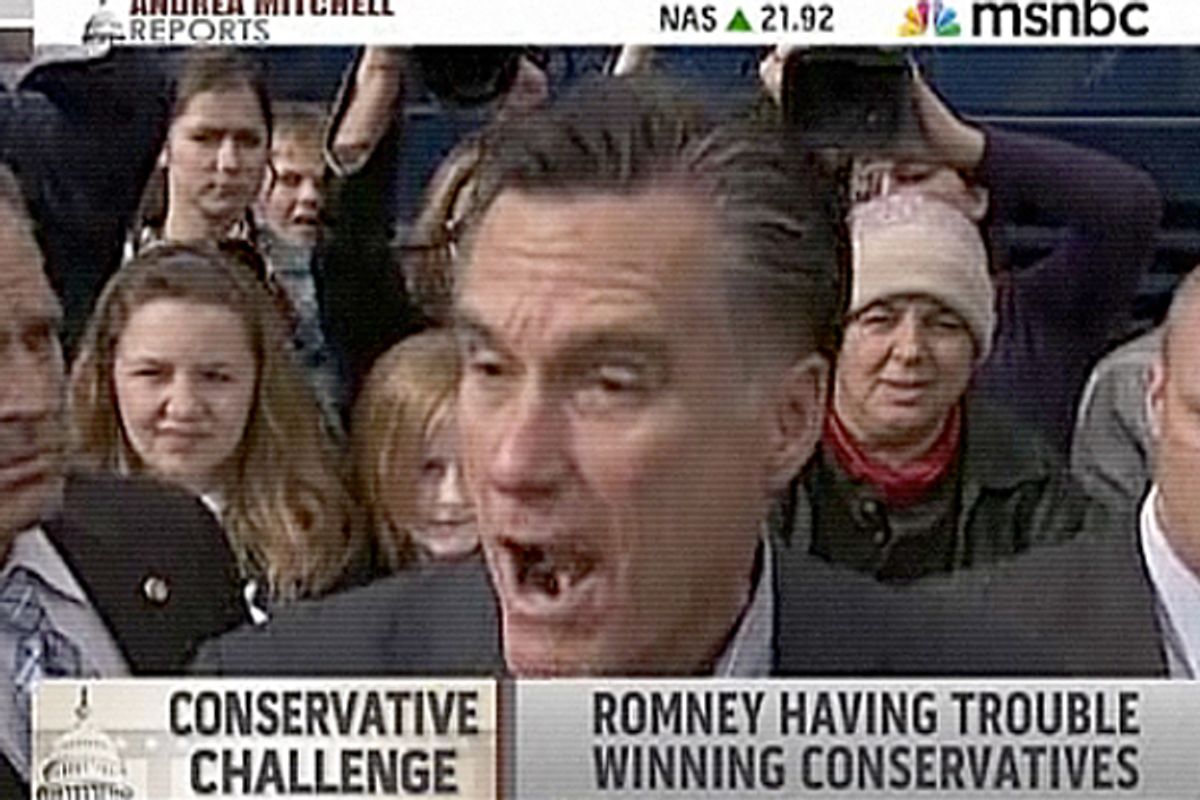 Sometimes Mitt Romney's animatronic persona can be a political liability. It's why the story of strapping his dog Seamus to the top of the family car for a 12-hour drive continues to, well, dog him: Who could be that callous? But most of the time I'd argue it's a virtue, especially in a farcical GOP campaign that Paul Krugman calls the "FOF primary," for "fools and frauds." The moderately intelligent Romney rarely seems rattled by the insanity around him; he goes through the meet and greet motions day after day, knowing his piles of money will eventually tumble out of a dump truck and crush his rivals. His stoic mien also helps Romney lie with impunity.

But Thursday we saw a different Mitt Romney, a man apparently rattled by Newt Gingrich's rise in the South Carolina polls. Romney's troubles have partly to do with Gingrich's nonpareil race-baiting, but they're also about an unfolding story line that depicts the man from Bain Capital, destroyer of jobs, dodger of taxes, as the perfect frontman for the top 1 percent in a time of rising (and long overdue) national concern with economic inequality. So when a man on a rope line outside Romney headquarters in Charleston asked him today, "What will you do to support the 99 percent even though you are part of the 1 percent?" Mitt snapped. He sounded a little more Chris Christie than Richie Rich, which is what so many of his GOP friends have been urging, but I'm not sure it's going to play well. Here's what he said, his face getting redder as he closed:

Lemme tell ya something. America is a great nation, because we're a united nation and those who are trying to divide the nation as you're trying to do here and as the president is doing are hurting this country, seriously. The right course for America is not to divide America, and try and divide us between one and another, it's for us to come together as a nation. And if you've got a better model, if you think China is better, or Russia is better, or Cuba's better, or North Korea's better, I'm glad to hear all about it. But you know what? America's right, and you're wrong!

On MSNBC, Andrea Mitchell praised Romney for sounding "Reaganesque," which left Ron Fournier aghast. "I'd say he built a straw man. That protester didn't say he thought Cuba and Russia had a better economic system, what he said was that Romney's part of the 1 percent, and which is true.  Romney talked about the politics that divide, the fact is, it's not politics that divides us, we are divided. There is a huge and growing gap between the rich and the middle class and the poor – and by the way, that's an anxiety shared by blue-collar Republicans and blue-collar Democrats."

They're both right. Romney did sound Reaganesque – the nasty, bitter Reagan who was California's governor more than the genial "morning in America" president most people remember (although both Reagans could play the politics of resentment when they had to). But I'd say he was more Nixon than Reagan. And that redbaiting, wow. "America's right, and you're wrong" is just as angry and divisive as "America, love it or leave it." Fournier's commonsense answer also ought to remind working-class fence-sitters that even supposed GOP populists like Chris Christie actually carry water for guys like Richie Rich. It really shouldn't matter if you sound like Christie but push policies that enrich the Romneys. The South Carolina primary keeps getting more interesting.

Still, I stand behind my post last night refusing to take this new Gingrich surge seriously. For establishment Republicans, this second Newt surge has to feel like acid reflux; there is no way the thrice-married, disgraced House speaker will ever be president. But let's give a hand to Rick Perry, who bumbled his way out of the race the way he bumbled through it, handing his endorsement to Gingrich on the very same morning Newt's second wife told ABC News that he asked her for an open marriage so he could go on romancing his mistress Callista without the political stain of another divorce. You might say Perry was trying to help his buddy distract the media from the Marianne story. You would be wrong.

Poor Rick Santorum. Mr. blue-collar family values from Pennsylvania keeps getting jilted for the Tiffany's-shopping serial adulterer from Georgia. Even the news that he actually won Iowa comes too late to produce another Santorum surge. (Sorry.) He's probably under enormous pressure to follow Perry out the door, but on Thursday he looked too angry to consider that. It's down to Romney and Gingrich in South Carolina.

Here's the Romney video. He starts his tirade about a minute in.