There are plenty of other spectacular views from the cockpit window, like the northern lights or shooting stars 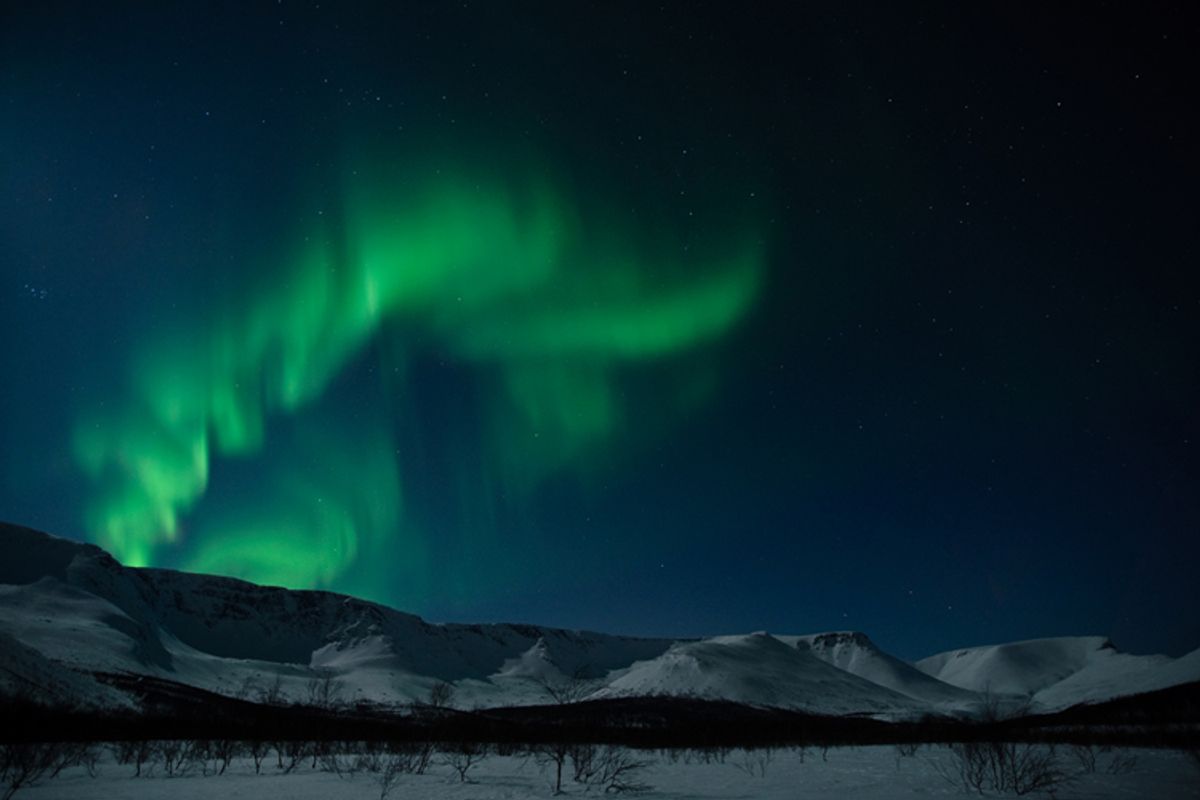 The northern lights above the mountains.
--

As pilots are sitting up there for hours, often late at night, or above the cloud level, have you ever seen anything really weird or fantastic?

A reader once asked me about a supposed "tacit agreement" between pilots in which we will not openly discuss UFO sightings out of fear of embarrassment and, as the reader put it, "possible career suicide." I had to laugh at the notion of there being a tacit agreement among pilots over anything, let alone UFO sightings. And although plenty of things in aviation are tantamount to "career suicide," withholding information about UFOs isn't one of them.

For the record, I have never met a pilot who claims to have had a UFO sighting. Honestly, the topic is one that almost never comes up, even during those long, dark flights across the ocean. Musings about the vastness of the universe are one thing, but I cannot recall ever having had a conversation with another pilot about UFOs specifically. Neither have I ever seen the topic discussed in any industry journal or trade publication.

Which isn’t to say there aren’t plenty of spectacular views to behold through the cockpit windows. Some of my personal favorites:

-- Shooting stars. Especially during the annual, late-summer Perseids meteor shower. Most impressive are the ones that linger on the horizon for several seconds, changing color as they burrow into the atmosphere. I've seen shooting stars so bright they were visible even in daylight. (Who knows how many I’ve missed? At night we often turn the ambient cockpit lighting to full bright, which makes it difficult to see outside.)

-- The northern lights. At its most vivid, the aurora borealis really has to be seen to be believed -- a quivering, horizon-wide curtain of fluorescence. And you needn't traipse to the Yukon or Siberia; the most dazzling display I've ever witnessed was on a flight between Detroit and New York. The heavens had come alive with immense, wavering sheets of color, like God's laundry flapping in the night sky.

-- The eerie, flickering orange glow of the Venezuelan oil fields -- an apocalyptic vista that makes you feel like a B-17 pilot in 1945.

-- Similar, but more thoroughly depressing, are the thousands of slash-and-burn fires you'll see burning throughout the Amazon. Some of the fire fronts are literally miles long -- walls of red flame chewing through the forests.

-- Somewhat compensating for the above are the vast, for now untouched forests of northeastern South America. Over Guyana in particular the view is like nothing else in the world -- an expanse of primeval green as far as the eye can see. No towns, no roads, no people, no clear-cutting or fires. Yet.

-- Climbing out over the "tablecloth"  -- the cloud deck that routinely drapes itself over Table Mountain in Cape Town, South Africa.

-- The frozen, midwinter oblivion of northeastern Canada. I love passing over the jaggedy, end-of-the-world remoteness of Newfoundland, Labrador and northern Quebec -- this gale-thrashed nether-region of boulders, forests and frozen black rivers.

-- The majestic, primordial nothingness of Greenland.  The great circle routes between the United States and Europe often take us over Greenland. Sometimes it's merely a brush of the southern tip; other times it's 45 minutes across the meatier vistas of the interior. If you've got a window seat and your seat-back progress screen is headed this way, do not miss the opportunity to steal a peek, even if it means splashing your fast-asleep seatmate with sunshine. Set an alarm if you have to. It's worth it.

Other views aren't spectacle so much as just peculiar.

One afternoon we were coasting in from Europe, about 200 miles east of Halifax, Nova Scotia. "Gander Center," I called in. "Got time for a question?"

"Do you have any idea what the name of that strange little island is that we just passed over?"

"Sure do," said the man in Gander. "That's Sable Island."

Sable Island is one of the oddest places I've ever seen from aloft. The oceans are full of remote islands, but Sable's precarious isolation makes it especially peculiar. It’s a tiny, ribbony crescent of sand, almost Bahamian in shape and texture, all alone against the relentless North Atlantic. It’s like the fragment of a submerged archipelago -- a miniature island that has lost its friends.

I’d flown over Sable many times and had been meaning to ask about it. Only later did I learn that the place has been “the subject of extensive scientific research,” according to one website, “and of numerous documentary films, books and magazine articles.” Most famously, it’s the home of 250 or so wild horses. Horses have been on Sable since the late 18th century, surviving on grass and freshwater ponds. Transient visitors include grey seals and up to 300 species of birds. Human access is tightly restricted. The only permanent dwelling is a scientific research station staffed by a handful of people.

"Island," maybe, is being generous. Sable is really nothing more than a sand bar, a sinewy splinter of dunes and grass – 26 miles long and only a mile wide – lashed and scraped by surf and wind. How staggeringly vulnerable it appears from 38,000 feet.

Odder, even, than a UFO.