The curators of an L.A. exhibit talk about how two influential artists melded sexual imagery with war commentary 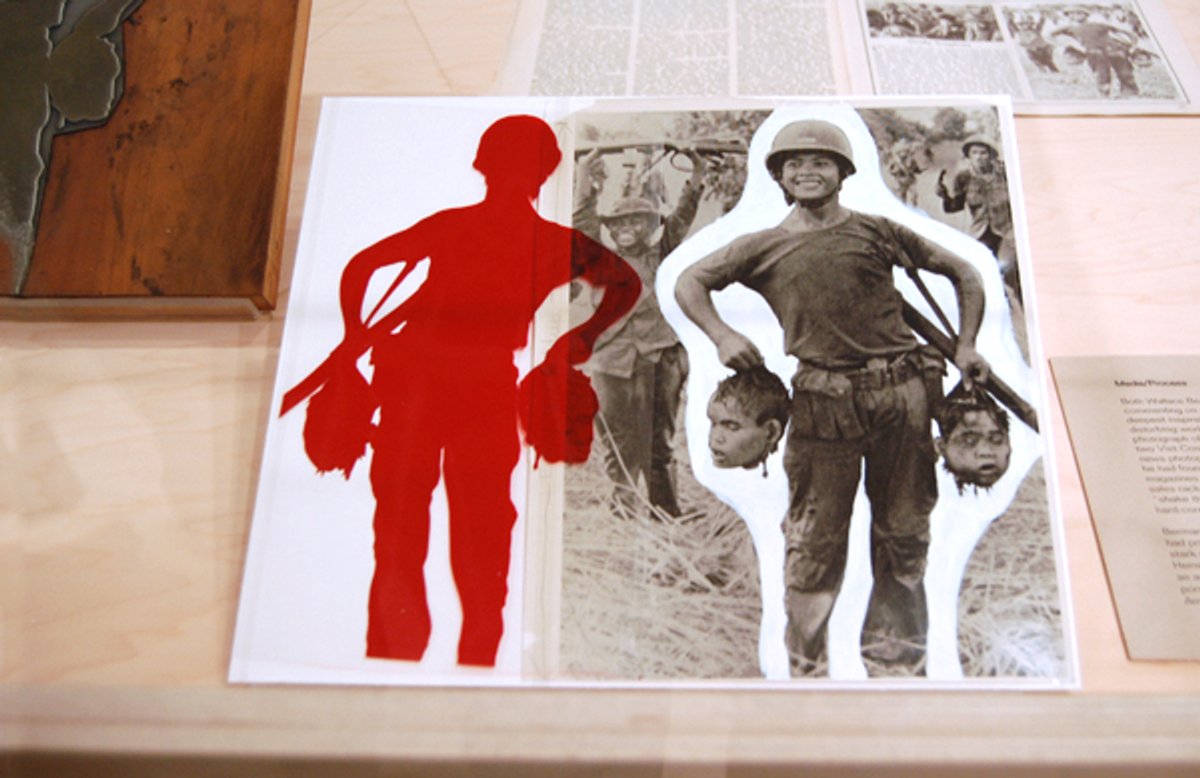 This is the second half of my interview with Claudia Bohn-Spector and Sam Mellon, curators of "Speaking in Tongues: Wallace Berman and Robert Heinecken, 1961-1976," a Pacific Standard Time exhibition currently at the Armory Center for the Arts.

In Part 1, we discussed Berman and Heinecken as designers, jokesters and rear-guard revolutionaries.

When I saw Heinecken's smiling Cambodian soldier I immediately thought of Lynndie England.

Sam Mellon: I think that's a really interesting observation. Comparing Robert's appropriated image of the Cambodian soldier to images of Lynndie England at Abu Ghraib is certainly right on, because both share that shock of horrific acts contrasted with a gloating soldier of somewhat indeterminate gender, the Cambodian looking quite feminine, and England rather boyish. Both images raise the issues of war and abuse. And then there's this weird gender-bending that makes this image more than just a simple comment on war.

Generally speaking, I think the reason this show has resonated so sharply with people -- especially a younger generation -- is because the work really holds up over time. And that’s mainly because the issues both artists addressed haven’t really gone away, politically, socially and culturally. The greed, the hypocrisy, the violence, the injustice and the shallowness of the political process are still pretty much everywhere.

And their techniques of collage, appropriation, overlay and juxtaposition are now perhaps more relevant than ever in light of our increasingly mediated digital age. So in a way, all their works speak to what’s happening today. And while people today are perhaps more media-savvy and better consumers of “information,” they still have a lot to learn from Berman and Heinecken.

But it’s also more than that. For me their work is also about the personal. Really, with so much of the work from that era being intentionally cold and removed, Heinecken and Berman are unusual in that they both seemingly make quite personal statements in each and every work they do. Sometimes it's poetic, sometimes it's political and sometimes it’s simply filled with unashamed lust and human longing. Those are all things we still are concerned about and/or crave in the 21st century, a desire for what’s authentic!

The characters and the conflicts may have changed, but the heart of our human desires and the eagerness to correct societal wrongs are imbedded in our common quest to insert a relevant meaning in art.

Sam, you mention in your catalog essay that Heinecken was viewed as a misogynist in his time.

Sam Mellon: Unfortunately, I think Robert was sorely misunderstood for his intentions in using pornographic imagery. From every report I've heard by any woman that was ever close to him, he was a very loving and caring man. He loved women, and women loved him. And he also loved sex and used it in his work, openly acknowledging that his most heightened sensibility was his sexuality. But that doesn’t necessarily make him a misogynist. Though I will say that there is a bit of an obsessional quality to his engagement with porn that was perhaps more problematic than Robert was able to realize or admit. And I think it creates an interesting tension in his work that demands a closer look. I think that he possibly struggled with what he saw as a powerful and beautiful part of the heterosexual male experience, and that there was a cultural problem with how we were looking at women, and how they were being portrayed in the media.

Sadly, I think feminist critics at the time didn't look deep enough into his work to see that he was actually delivering a very powerful and intelligent media critique -- not just about women, but about media in general. They got stuck on the surface of his work. But I think this younger generation is beyond that hyper-sensitivity and is able to appreciate the work for both its photographic poetry and the sharp-witted and intelligent statements it's trying to make.

I also think there is an older generation that deserves a lot of credit for giving the work a second chance and being able to leave preconceived ideas at the door. I can't tell you how many times we've heard this comment that individuals once had a real problem with the work, but now that they're seeing it again, and in this context with Wallace's work, they finally "get it."

Wallace's use of sexual imagery from this period is much more controlled, covert, and implied. But for Robert I think this is a real victory in the fight for his legacy. I hope, if nothing else, our show corrects this misunderstanding about Robert and his work, and that it helps him assume his rightful spot in art history.

Sam Mellon: You know, it's been an interesting thing to see how little the pornographic imagery has really upset anyone. Perhaps as Americans we're finally getting over our sexual phobias – but I just think what was shocking to the mainstream in the 1950s and '60s, and even later, just isn't that upsetting in 2012, especially to a generation that grew up with reality television and access to the "World Wide Web!"

Speaking of which, how do these works relate to today's digital media environment?

Sam Mellon: It seems to me that this show is probably really intriguing to a younger generation who grew up “cutting and pasting” in the virtual sense in programs like Photoshop. But this generation’s ability to achieve perfection through digital means must leave them in awe of Wallace and Robert's craftsmanship and exactitude. This was the literal cut and paste era! X-acto knives and glue sticks!

But the idea of superimposition, excavation and contextual shifts are all things that artists are still working to technically achieve in their work today. The tools are more advanced now, but Robert's and Wallace's ideas and techniques are still relevant. And I think a younger generation can really appreciate the patience and skill it required to accomplish their aesthetic ideas.

Who do you consider to be the inheritors of Berman's and Heinecken's legacy?

Claudia Bohn-Spector: Anybody in art/media/design working with appropriated, altered, and mediated imagery today is an inheritor of their legacy, whether they know it or not. Berman and Heinecken were really pioneers of that, and anybody concerned with "media critique" in their art stands on their shoulders, be it someone very established, like Richard Prince, or, more recently, folks like Carter Mull or Amanda Ross-Ho.

Berman and Heinecken, of course, were not the only ones who pioneered these types of approaches, but their particular kind of engagement with these questions was uniquely rich and forward-looking and deserves to be looked at today more than ever before.