We thought bringing in new people would add adventure and spice up our sex life. We were so wrong 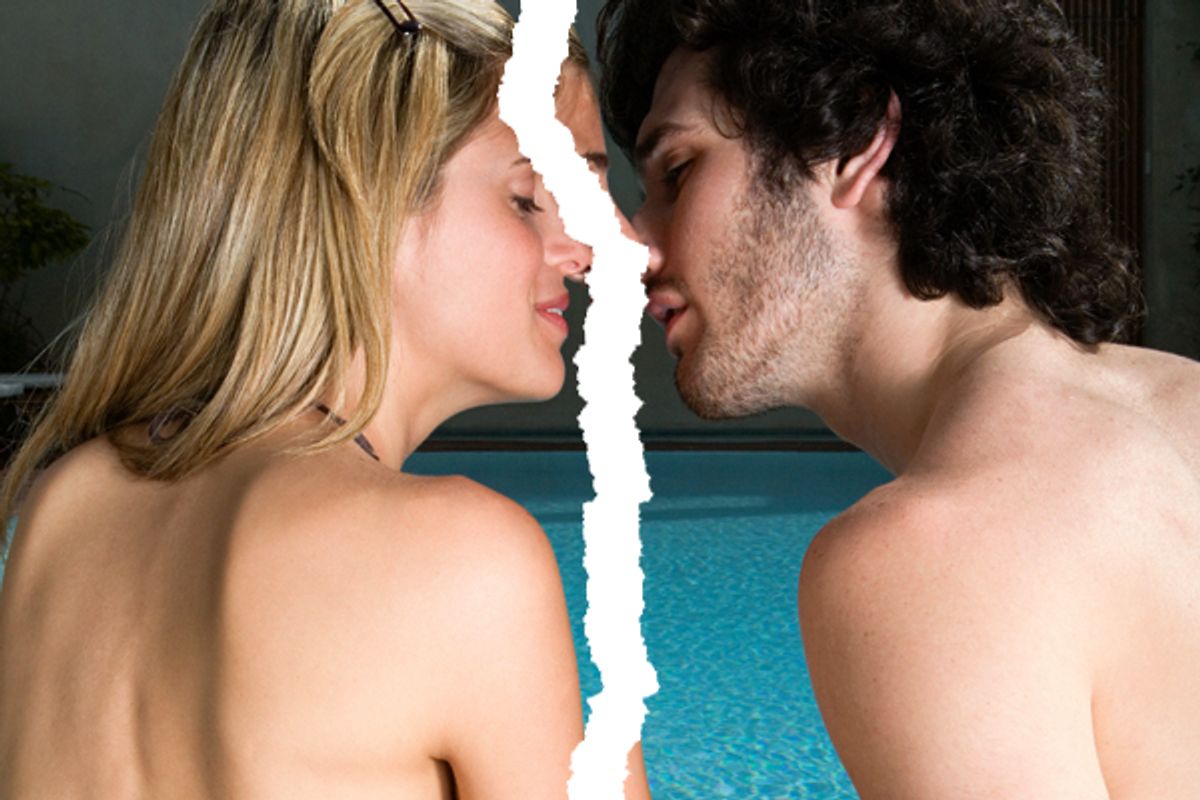 My wife, Rachael, and I stood by a Jacuzzi in Fire Island with a dozen gay men. We were all watching Jason have at Mandy. Again. It was sex, but it wasn’t particularly sexy — more Animal Planet than Spice Channel. Mandy had braced herself against the edge of the blue fiberglass tub, her ropy black hair spilling down in front of her. And with each of Jason's thrusts, a swell of water cascaded over the lip of the tub to the deck below. The sound of water slapping wood blended with the couple’s moans in an oddly syncopated rhythm. It was a pretty slick groove, actually — somewhere between bossa nova and Barry White.

It was Rachael who had opened the door to this world. Before I met her, I’d been floating through life, brooding, adrift, like the down-on-his-luck male lead in a film noir, nursing his drink in some saloon, wondering what was next. But Rachael was beautiful, smart and driven. So were her friends -- witty, confident gay men who reveled in their success and flaunted it with cool cars, beautiful clothes and impeccably decorated homes. Rachael loved them, and so did I.

It was the mid-'90s, the era of Clinton, boom times and surplus. Over cocktails and cocaine, there was talk of Human Rights Coalition fundraisers, hot tech investments, the cost of kitchen renovations, vacations to Tuscany, and second homes in Rehoboth. In this world, Rachael and I were the exotic ones — the hot straight couple who partied like rock stars with the boys. There were group vacations to Provence, Cancun and Istanbul. There were parties in Miami, New York, Amsterdam, Montreal, Mykonos and San Francisco. We became a major subculture’s minor celebrities.

Rachael and I were curious. Everything else about this lifestyle seemed to be working for us. Could promiscuity? Not according to our best friend, Christian.

“You manage just fine,” Rachael said. Christian and his male partner of nearly 15 years had avoided the emotional minefields of playing the field by employing a policy of full participation when they were together and discretion when they were not. It was an arrangement I referred to as “don’t ask, don’t smell.”

Christian patted my cheek. “Laugh now, but you’re getting privileged information here. Hard-earned, too. Truth is, straight or gay, it’s a crap shoot. Everything’s going along fine, then someone sticks his willy somewhere and the damn thing blows up like an exploding cigar.”

Still, we were determined to find out for ourselves. The opportunity to do just that came in the form of Jason and Mandy, two personal trainers we met at a club during gay pride celebrations in Boston. Jason was straight; Mandy was bisexual. Most of Jason and Mandy’s clients were gay, as were many of their friends. It seemed so perfect.

Narrow boardwalks wound through pine forests and connected the houses together like the yellow brick road. Trees reverberated with the clickity-clack of big men pulling little red wagons full of groceries and luggage to and from the ferry terminal. There were miles of desolate sand dunes and achingly beautiful sea grass-lined beaches. Then, shoved into this bucolic utopia were New York City sensibilities, as over the top as William Shatner reciting Shakespeare: designer-decorated homes where a summer share cost the same as a three-bedroom rambler in most parts of the country; huge, lavish parties; smaller, yet more lavish parties; social climbing galore; one-upsmanship; balls-to-the-wall, 24/7.

The only nightclub, the Pavilion, was a wooden sweat box. In the morning, a stream of clubbed-out zombies shuffled shamelessly along the walkways looking for an after-party and sex.

The owner of the house in which we stayed was Ramon, also known as the cha-cha-doctor of Chelsea, who specialized, ironically, in the research and treatment of AIDS. (Though Ramon was not really his name. I've changed all the names in this piece, for what I assume are obvious reasons.) He was the perfect host. Anything you wanted — as long as what you wanted was sex or drugs. There were vials of everything, everywhere, all the time. If it wasn’t in front of you, all you had to do was ask: K, G, X, poppers, weed, Viagra, crystal — especially crystal. Snorted, smoked or shot up, only crystal could keep the party, and the sex, going full-tilt for days.

Rachael and I saw the last translucent veil separating us from our friends ripped away. We hung a welcome sign on our bed. Jason and Mandy jumped right in. High as I was, the sex had a dreamy quality, as though I was watching myself perform pornography through a Vaseline-coated camera lens.

Then, just as Christian predicted, things came undone. I happened upon Rachael and Jason having sex in the poolside shower. I tried to ignore the stab of jealousy and resentment. But I couldn’t. Mandy, jacked up on nearly everything, woke me up in the middle of the night to see the stars. We jumped in the pool and had sex as the sun came up. Mandy’s sex with Jason was raw, animal-like, but with me she was tender and sweet, a perfect counterpoint to her rock-hard body.

I fell into a crush. And that’s when, with the two of us standing in the shallow end of the pool, her legs wrapped around my waist, she made a confession:

My heart raced. “That makes two of us,” I said.

“It’s not just his looks. I’ve dated plenty of guys built like him — you know other trainers and body builders.”

“He’s so good to me. A genuinely nice guy. Slide back a little.” I did. She swiveled her hips and lowered herself onto me. “There,” she said, “that’s better.”

“Oh, he knows, all right. But I just can’t get him to make a commitment. At least not the way I want him to.” Her thigh muscles pulsed against my hips.

“So, you’d be willing to be exclusive if he agreed?”

“Sure. I’d be monogamous in a heartbeat with him — and with you and Rachael, of course. Pull my hair. Harder.”

In the midst of having sex with an acquaintance, Mandy was proposing a monogamous relationship involving four people, two couples — one of them married — living in different cities, a union composed of two heterosexual men and a couple of bisexual women.

Then, things got really complicated.

Rachael, Ramon and I walked into the guest bedroom and found Mandy pancaked between Jason and Ramon’s boyfriend. Ramon played it off as though it didn’t bother him. Rachael was mortified that our guests had appropriated our host’s partner. It did strike me as bad form.

The next evening, we all went over to the neighbor’s pool to watch the sunset. Rachael and I left Jason and Mandy, who gave in to the urging of the crowd and had sex on a lounge chair. The applause carried all the way over to Ramon’s house.

Jason and Mandy had become the show. My crush had been crushed. Rachael’s anger was smoldering. Behind my hurt feelings and Rachael’s indignation hid another emotion. We were jealous — and not just of each other. We were used to being the hot straight couple in this scene. After having the spotlight for so long, neither of us was OK with second billing.

“You’ve got nerve,” she said. “After that late-night stargazing session in the pool?”

“Why don’t you go and snort up a few more lines,” I said. “It brings out such a lovely side of you.”

Our experiment had gone haywire. Someone in charge needed to pull the plug. The problem was that no one was in charge of anything.

Jason and Mandy began staging special command performances in various venues, including the living room, the pool deck, the second floor balcony, the outdoor shower, the kitchen, and most recently, the Jacuzzi, where Rachael had just left me — high and dry.

Rachael saw me, lowered the pipe a few inches and shrugged. “When on Fire Island …”

Except for the muffled moans coming from the hot tub, the hiss from the small butane lighter was the only sound in the room. A thin tendril of smoke streamed into Rachael’s mouth.

Tweaked said, “Hold it in.” Rachael puffed up her cheeks and waited. “Now,”he said. She exhaled a small plume, like breath on a frosty morning.

Chipper pointed the pipe in my direction. “You want?”

Rachael said, “If this is the highway to hell, I’m not riding it alone.”

I tried to think of a reason not to. A good reason wouldn’t be good enough. Not here. Especially not here.

Tweaked snapped on the lighter and maneuvered the pale blue flame under the crystal. It melted and was transformed from powder into a white haze.

I touched my lips to the tip of the warm glass, inhaled and watched the smoke disappear until it emerged again as a frail, white wisp. There was only the slightest chemically tinged aftertaste. A wave spread through me, euphoric, but much more. There was clarity — perfect, doubt-obliterating clarity.

From outside, Mandy’s voice spiraled up, signaling her orgasm. I looked up to the ceiling. The image there was as plain as it is unambiguous: It was me and Rachael, sharing the first car on our fantasy roller coaster — a ride with no rules or limits, our arms held over our heads as it came right off the rails.

Rachael came up to me. She placed her arm on my shoulder. “You OK?”

Chipper was right. Rachael and I returned home, where our sleep-and-food-deprived bodies finally teamed up with our ravaged nervous systems and our bruised egos to let us have it, right in the old cerebellum. The whole damn country seemed to join us in a spectacular crash, as markets collapsed and planes smashed into buildings. Some of our friends ended up sick, others in rehab. It had been one hell of a party, but the party was over.

And so were Rachael and I. After Fire Island, a black shroud descended over us. We burrowed down into a grinding disillusionment and mutual resentment from which our relationship never really recovered. There was an affair — mine — followed by divorce.

“More is more,” Rachael used to say. Maybe so. But on Fire Island I learned that, sometimes, more is just too much.

Nicholas Garnett is a teacher and freelance writer who lives in Miami. His memoir, "In the Pink," remains a project in search of a publisher.