Our selective stance on bigotry

Some of Paul\'s stances are odious. But our racist drug war and Islamophobic invasions are equally offensive 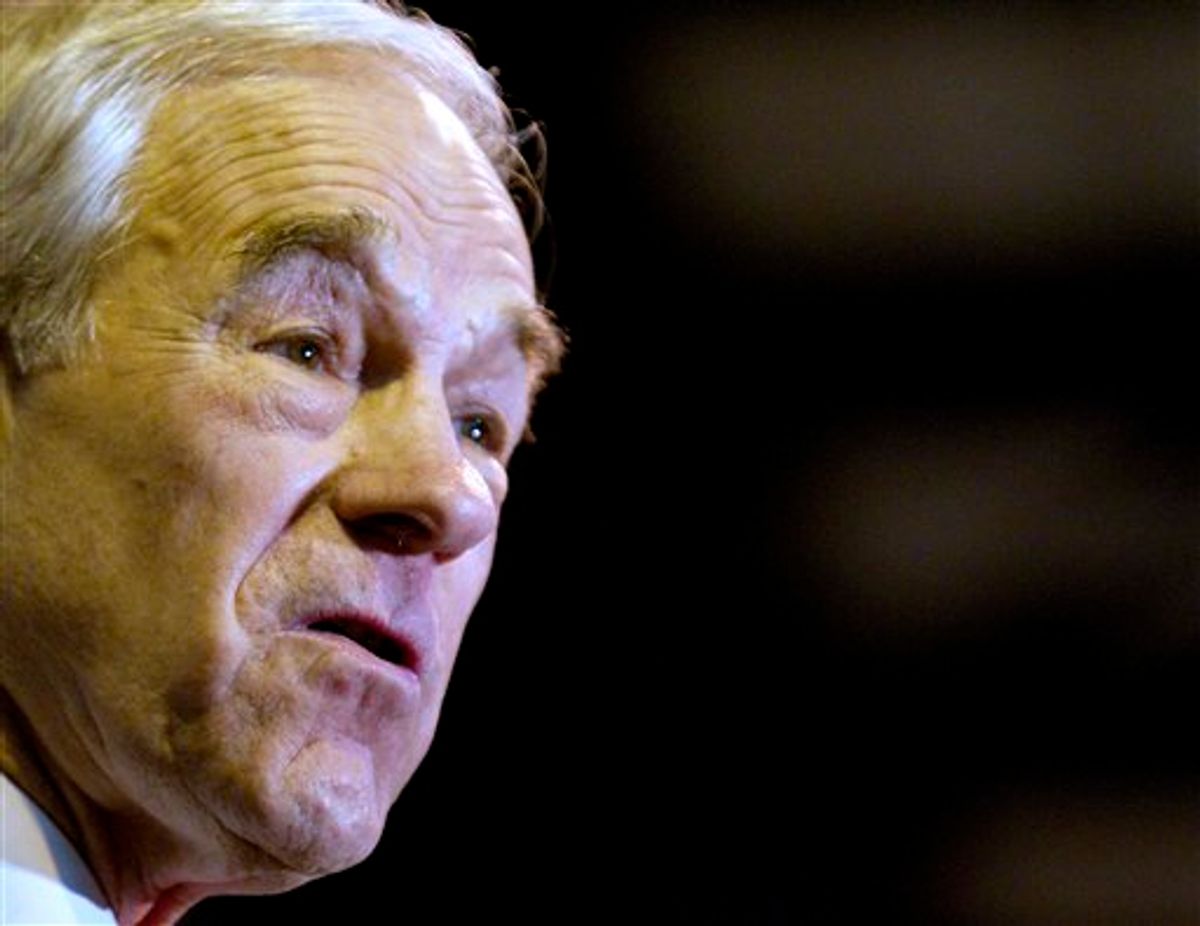 If they have any value at all anymore, presidential election campaigns at least remain larger-than-life mirrors reflecting back painful truths about our society. As evidence, ponder the two-sided debate over Republican candidate Ron Paul and bigotry.

One camp cites Paul's hate-filled newsletters and his libertarian opposition to civil rights regulations as evidence that he aligns with racists. As the esteemed scholar Tim Wise puts it: This part of Paul's record proves that he represents "the reactionary, white supremacist, Social Darwinists of this culture, who believe ... the police who dragged sit-in protesters off soda fountain stools for trespassing on a white man’s property were justified in doing so, and that the freedom of department store owners to refuse to let black people try on clothes in their dressing rooms was more sacrosanct than the right of black people to be treated like human beings."

The other camp tends to acknowledge those ugly truths about Paul, but then points out that the Texas congressman has been one of the only politicians 1) fighting surveillance, indefinite detention and due-process-free assassination policies almost exclusively aimed at minorities; 2) opposing wars that often seem motivated by rank Islamophobia; and 3) railing against the bigotry of a drug war that disproportionately targets people of color. Summarizing this part of Paul's record, the Atlantic Monthly's Conor Friedersdorf has written: "When it comes to America’s most racist or racially fraught policies" affecting the world today, "Paul is arguably on the right side of all of them (while) his opponents are often on the wrong side."

So which side is right? Both of them, and thanks to that powerful oxymoron, Paul has become a mirror reflecting back our own problematic biases. Specifically, his candidacy is showing that the conventional definition of intolerable bigotry is disturbingly narrow -- and embarrassingly selective.

This reality is best demonstrated by those voters who say they detest Paul not because of his extreme economic ideas, but because they feel his record represents an unacceptable form of racism. These folks will likely tell you that their alleged commitment to policies promoting racial equality has moved them to support Mitt Romney or Barack Obama, politicians who, of course, support bigoted civil liberties atrocities, Islamophobic foreign invasions and a racist drug war.

In making such a choice, then, these voters are tacitly embracing the definition of unacceptable bigotry as only hate speech (Paul's newsletters) and opposition to civil rights laws (Paul's odious position), but not also various forms of institutional bigotry that their favored candidates support and that Paul has fought to end. Incredibly, this selective definition asks us to ignore many of the most destructive tenets of what legal scholar Michelle Alexander's celebrated book calls "The New Jim Crow." And yet, as the reaction to Paul proves, it is precisely this definition that pervades so much of American society.

To be clear: Noting this hypocrisy is not meant to urge a vote for Paul (I'm not a Paul supporter), nor does it absolve those Paul fans who wholly ignore the objectionable parts of their candidate's record on race. Instead, it is simply meant to argue that if we’re going to have a long overdue discussion about bigotry, then let's have an honest conversation about all forms of bigotry -- not our current talking-points-driven screamfest that rightly criticizes one kind of prejudice but wrongly tolerates other forms of prejudice that are often just as destructive.

Perpetuating that kind of naked bait-and-switchery may help one set of candidates and hurt another in a given presidential campaign, but it does nothing to advance the cause of equality in America.