Does it matter Newt cheated?

When all morality collapses into sexual morality, it's the voters who get screwed 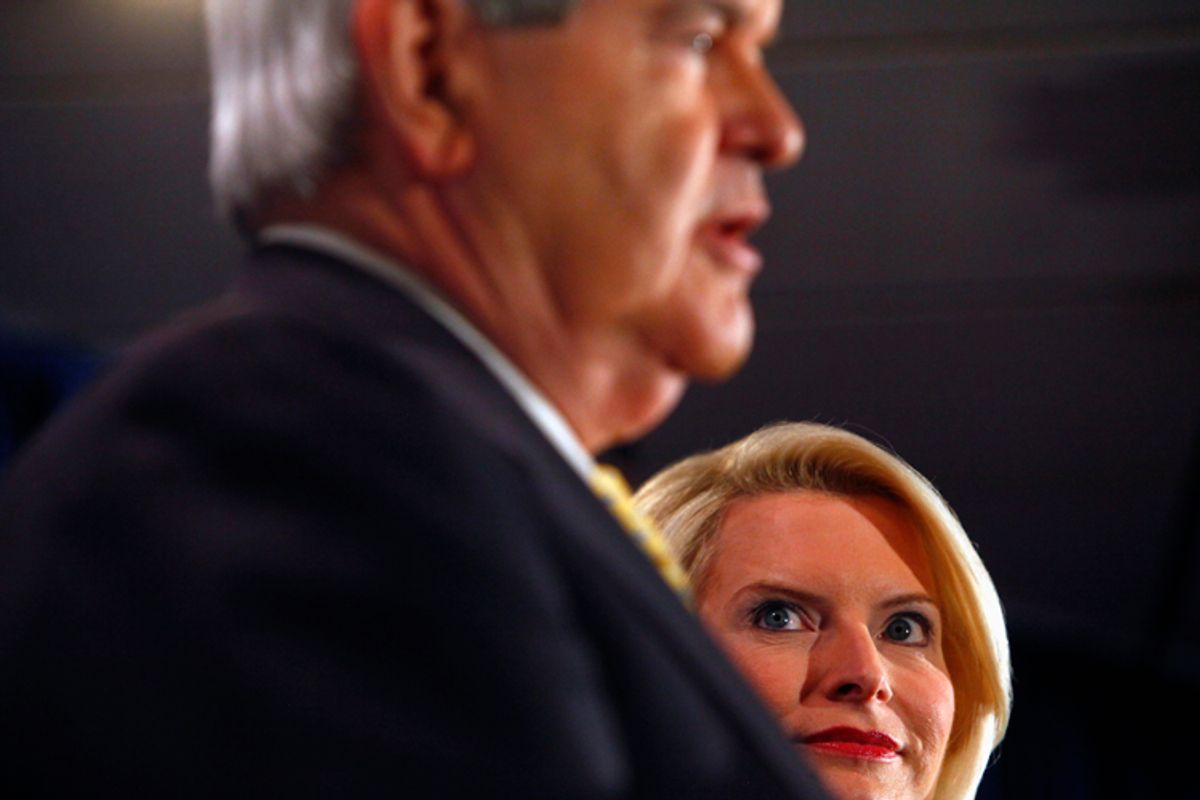 Newt Gingrich’s second wife, Marianne, told ABC News he’s morally unfit to be president because he cut out on her with Callista and then asked her to go along with the arrangement. She’s attacking the candidate who shut down the entire U.S. government because it was spending too much money on poor people; who thinks that "African-American" is just a synonym for food stamp recipient; and who wants to conscript impoverished children into janitorial jobs to teach them promptness. And we’re worrying about what he did with his dick? Watch out: When all morality collapses into sexual morality, the voters will become so fixated on whom the candidates are screwing they don’t notice ...  it’s them.

Most of the fault for this misallocation of our moral indignation lies, of course, in the unruly sexuality of fourth-century Christian theologian Augustine of Hippo. Like Newt Gingrich, Augustine’s sexual desires stood in the way of his ambition -- in his case, for a career in the church. Although, like Gingrich, Augustine finally suppressed sufficiently to embrace the requisite behavior, in his struggles he left behind the wicked legacy that conflates sexual desire with moral failure. As time went by, the church agreed that sex was OK as long as you confined it to one lifelong heterosexual reproductive marriage. The monogamous marriage really took off as a moral model when Martin Luther founded the Protestant wing that Gingrich the Catholic now eschews. Like Gingrich, Martin Luther had his eye on a nun long before he nailed the theses.

And so when Gingrich decided to get married in 1962 and again in 1981 and once more in 2000, Speaker Gingrich had to commit himself to be faithful to Wife 1, Wife 2 and, now, Callista. And then he breached his contract. Again and again. Unless you live in fourth-century Italy, that’s what infidelity is. Not the sum and substance of all that’s wrong in the world. Not the only thing a Republican can do that is legitimate to criticize (enjoying all those Cayman millions, Mitt?). Not the definition of immorality. But definitely a breach of contract. It's like walking away from your mortgage when your house is underwater or wearing a dress to the party and then taking it back to the store.

Breach of contract, like lying, is not nothing. When people try to get out from under the Catholic/Protestant order of sexual morality, they try to say Gingriching around is nothing, as long as you don’t do it in the streets and scare the horses: the right to privacy and all that. That is as foolish as saying infidelity is everything. All you have to do is look at the video of the usually unflappable Hillary Clinton walking to the helicopter to Camp David that awful day in 1997 to know that breaching the fidelity contract is not nothing.

The problem is, what with no-fault divorce, our society provides no damages for breach of sexual contract other than a suicidal divorce. In most divorces, the breacher pays about the same price as he would for forgetting to return his Netflix. Especially if he’s a big, powerful man like Newt Gingrich and the wife was foolish enough to bet all her hopes for her future on his stellar course. Or Bill Clinton. Or France’s contribution to the news category, feel-like-you-need-a-shower-after-hearing-it, Dominique Strauss-Kahn.

Their wives were smart enough not to try to enforce their contract of marital fidelity through the suicidal medium of divorce. Hillary Clinton gagged it down and she almost made it to the White House. Anne Sinclair got chosen the most admired woman in France. Don’t blame them for choosing unconditional surrender. Under the current divorce laws and social norms, those alpha males are the U.S.Army and the wives are Grenada. Why does the society treat the women who invest early in high-flying careers so much worse than the early investors in, say, Facebook? A better system would treat a Marianne Gingrich at least as well as the courts treated the Winklevoss twins.

Which is why I’m actually rooting for Marianne. When she refused to take Newt’s offer and stay on the gravy train, he tried to stick her with two grand a month they had agreed to after an earlier squabble. His earlier attempts to avoid supporting his first wife and their daughters were also legendary. Now he’s a Tiffany-patronizing, speech-making money machine, a gold mine. And as usual the ex-wife got the shaft. It’s not the definition of immorality, but her going public right before the South Carolina primary has all the appeal of asymmetrical warfare. Just as Newt was cruising down the road to victory in South Carolina his jeep hit an IED. He’ll probably be fine. But it’s so gratifying at least to see him bleed a little.