The president "should have stuck to his guns" on Mideast peace, says Zbigniew Brzezinski, former NSC advisor 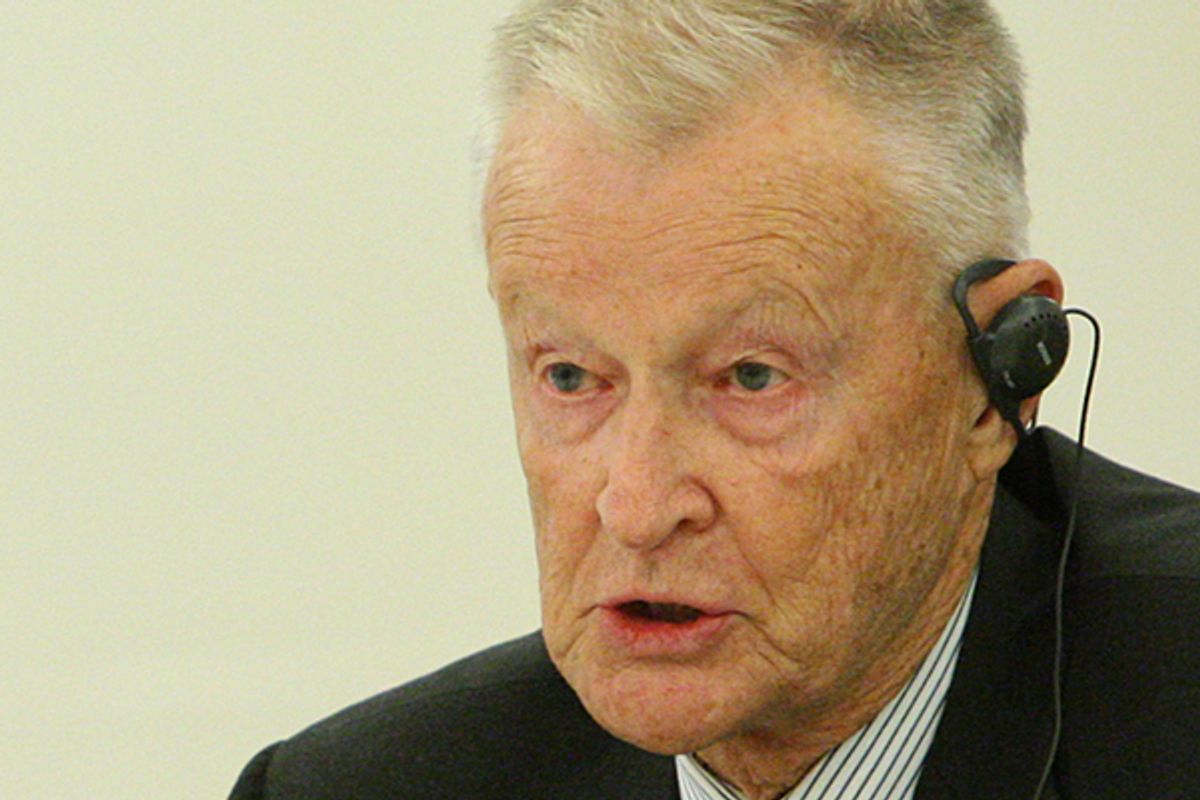 Zbigniew Brzezinski’s new book, "Strategic Vision," imagines a world without American power. He envisions profound instability, faltering international cooperation and weak states falling prey to their more dominant neighbors. Describing the dystopia that would emerge if America goes under is a trick British historian Niall Ferguson pioneered. Unlike the jingoistic Ferguson, however, Brzezinski is able to envision China replacing America as the stabilizing force in world affairs. “I don’t think liberal states are more restrained or stabilizing,” he says. “The United States’ actions in the last 20 years, especially with the war in Iraq, do not give reassurance on that score.”

Such unorthodox thinking has made the Polish-born Brzezinski arguably the greatest living scholar-practitioner  in Democratic Party ranks. As a scholar, he was erratic but he also foresaw the Soviet Union’s crack-up long before it occurred. As Jimmy Carter’s national security advisor, he was controversial and even reckless, but he imbued the president with strong doses of reality concerning the Soviet Union and the Middle East. Since the end of the Cold War, he stayed relevant presciently opposing the Iraq War and supporting presidential candidate Barack Obama at a crucial, early date.

In a telephone interview from his office at the Center for Strategic and International Studies in Washington, D.C., Brzezinski has both praise and criticism for the president: “He was an improvement by a very large score over his predecessor, but he could have been better.” He thinks the Obama administration “should have stuck to its guns in promoting a fair settlement” in the Middle East. A longtime foe of Israel’s partisans in the United States, he says the Obama team “fumbled by getting outmaneuvered by the Israelis.” Then he gets blunter: “Domestic politics interceded: The Israelis have a lot of influence with Congress, and in some cases they are able to buy influence."

Brzezinski is still a believer in the two-state solution for Israelis and Palestinians, and is hopeful that Obama will again take up the cause if he gets a second term. “He would have time and the historical immunity to do so, because he wouldn’t be facing an election.” He also thinks space has opened up in the United States to be more critical of Israel. “The American public is becoming more discriminating, and the Jewish public in America is becoming more discriminating,” he says. “They realize that extremist sloganeering and warmongering are not the most helpful approaches.” Brzezinski is careful to note that he was never an official advisor to either candidate or President Obama but lets it be known they are still in touch: “I have a relationship where from time to time I am able to share my views with him,” he says.

The focus of "Strategic Vision" is not on the Middle East, but further to the east. Unlike other adherents to the foreign-policy school known as realism, Brzezinski does not see war between China and the United States as inevitable. Conflict, yes, but war, no. "You can have conflicts but avoid a real collision," he says, arguing there is only a “remote possibility” of war between China and the U.S. over the next 10 to 15 years.

What makes Brzezinski relatively optimistic for the chances of Sino-American cooperation are his views on history. Many times when great powers have shifted positions in the international hierarchy, they have gone to war. Those predicting China and the United States will inevitably come to blows are relying on history and international relations theory, Brzezinski says. “That’s fine as long as there is historical continuity," he says, but he thinks the world has changed. “I think major wars have become too prohibitively costly for both sides” for states to want to engage in them, he says.

Two things could potentially ruin the chances for good relations between China and the United States, he suggests: a technological-military revolution, and ineffective leadership. “If there are fantastic breakthroughs in military capabilities that allow one side to neutralize each other’s,” Brzezinski says, the delicate balance necessary to maintain stability would be thrown off. Fortunately, there isn’t much chance of such a technology developing in the foreseeable future, he believes.

The quality of leadership is Brzezinski’s real wild card. Prudent leaders from both countries that prepare their respective publics for the compromises that will inevitably have to be made are badly needed. But the “mindless hypocrisy” of the Republican presidential candidates gives little ground for hope. He won’t single out any of them, finding all of them deeply flawed and uninspiring. Noting the Republican names attached to the blurbs for  "Strategic Vision" — among them former Defense Secretary Robert Gates and National Security Advisor Brent Scowcroft — Brzezinski believes there still is the “possibility for consensus.” But men like Scowcroft and Gates, who come from the center-right of the political spectrum, are no longer much welcomed in today’s Republican Party. “That is part of the problem," he laughed, not sounding entirely amused.