How Bradley Manning's fate will be decided 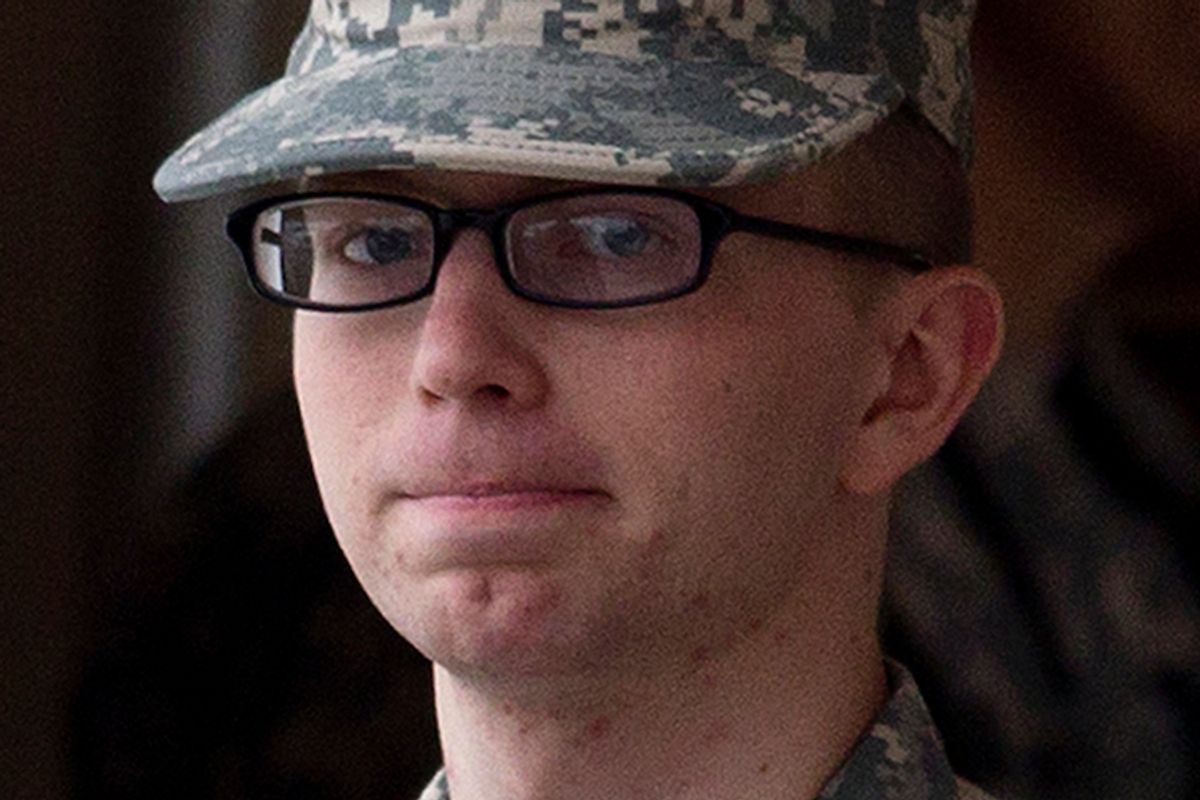 Army Pfc. Bradley Manning is escorted by military police from the courthouse after the sixth day of his Article 32 hearing at Fort Meade, Maryland, December 21, 2011. (Benjamin Myers / Reuters)
--

This week, Bradley Manning came one step closer to being tried for allegedly leaking a trove of secret American cables to WikiLeaks when a military officer made the formal recommendation that Manning should face a court-martial on 22 criminal charges.

One of the counts, aiding the enemy, carries the possibility of the death penalty, but prosecutors have already said they will not seek it in Manning's case.

The recommendation this week was made to Maj. Gen. Michael Linnington, commander of the Military District of Washington, who is what is known as the convening authority in the case. The military justice system has important differences from the civilian system, so I spoke to Eugene R. Fidell, who teaches military justice at Yale Law School, to explain the basics.

We've now had the investigating officer as well as another officer this week recommend a court-martial to the Military District of Washington commander. What's the next step?

A convening authority, which is a general officer, will decide whether to refer the case to a court-martial. There's no designated time frame for this, but I think it will be in the next couple of weeks. A court-martial is a military criminal court that will have serious punishment powers. There will be a military judge presiding over it, who is a uniformed lawyer. There's a prosecutor. There's defense counsel. Unless Manning waives the jury, there will be a jury of at least five people.

Who makes up the jury?

The jury is selected by the convening authority. It's not random selection. The general will select the members; it's supposed to be a blue ribbon group. They are supposed to be the best qualified people with respect to education, experience, judicial temperament and so on. Because Manning is an enlisted man, he has a right to enlisted representation on the court. That means that at least one-third of the jury would have to be enlisted men or women.

In the civilian trial setting, there's usually a lot of argument over who sits on the jury. How does that work in a court-martial?

The same thing happens. There's an opportunity for the lawyers on both sides to question the jurors -- who are actually called "members" in a court-martial -- to determine whether they are capable of acting impartially. Each side has a right to challenge a member not only for cause, but also peremptorily, in other words for no reason.

To convict a defendant in a non-capital case requires only a two-thirds vote of the members. How the vote breaks down depends on how many members there are. The minimum is five, but there's something called the numbers game that the lawyers on both sides are aware of. That is, that you want to use your right to challenge a member in order to manipulate the size of the court to maximize the chances of either conviction or acquittal, depending on your perspective. The number slightly tweaks the percentage. Two-thirds of five members is four, meaning the government would need 80 percent to convict. Two-thirds of six members is also four, which means the government would need only 66 percent to convict.

What about the judge -- how is he or she different than a judge in a civilian case?

The big difference as compared to a civilian federal judge is that a military judge doesn't have life tenure. The judge in an Army court-martial is guaranteed tenure for only three years, which in my opinion is inadequate. Individually the judges may be perfectly independent, but in terms of the structural protections, the U.S. system is highly deficient in this area.

So the concern is that these judges might be worried about their later career and that affects how they hear cases?

Yeah, that's the theory. Three years is shorter than any comparable criminal court in this country.

Turning to the trial itself, are the rules different than in a civilian court?

No, the rules are essentially the same as a federal district court. The rules of evidence are a virtual carbon copy, the rules of how people conduct themselves, and so on. Courts-martial are also open to the public, except to the extent that classified information is involved. Even then, only the bare minimum needed to protect the information is closed to the public.

If Manning is ultimately found guilty, how does the sentencing work?

If there is a jury, the jury will do sentencing. Remember, he can waive the jury. But he can't waive only on sentencing; he would have to waive it on guilt-or-innocence and sentencing together. If he waives the jury, the judge will decide both guilt or innocence and determine the sentence. If Manning goes with a jury, the sentence is determined by the jury. And anything in excess of 10 years has to be decided by a three-fourths vote. If it were a capital case -- which it's not -- there would have to be 12 members of the jury and they would have to be unanimous.

What about appeals -- can he appeal if he is found guilty?

The first level of review after a case is tried and there is a sentence is to the convening authority. He or she can disapprove the conviction, can cut the sentence and so forth. He or she can overturn the result of the trial. After the convening authority acts, it goes automatically to the Army Court of Criminal Appeals, which is made up of military officers who sit in northern Virginia. There are lawyers on both sides, and briefs are filed, and there may be oral argument. Then they will issue a decision. From there, assuming the case is affirmed, Manning would have the right to petition for discretionary review by the U.S. Court of Appeals for the Armed Forces. That's a civilian court of five judges who sit in Washington, D.C., with proceedings open to the public. If they granted review, there would be an oral argument, and the case would result in a decision. If that court grants review, then the case becomes eligible for review by the Supreme Court. The Supreme Court can refuse to hear it, but at least Manning would have the right to ask the Supreme Court for review.