The day I found out I had Parkinson's

After I heard the devastating news, I went to the park and wondered: Could I come to terms with losing everything? 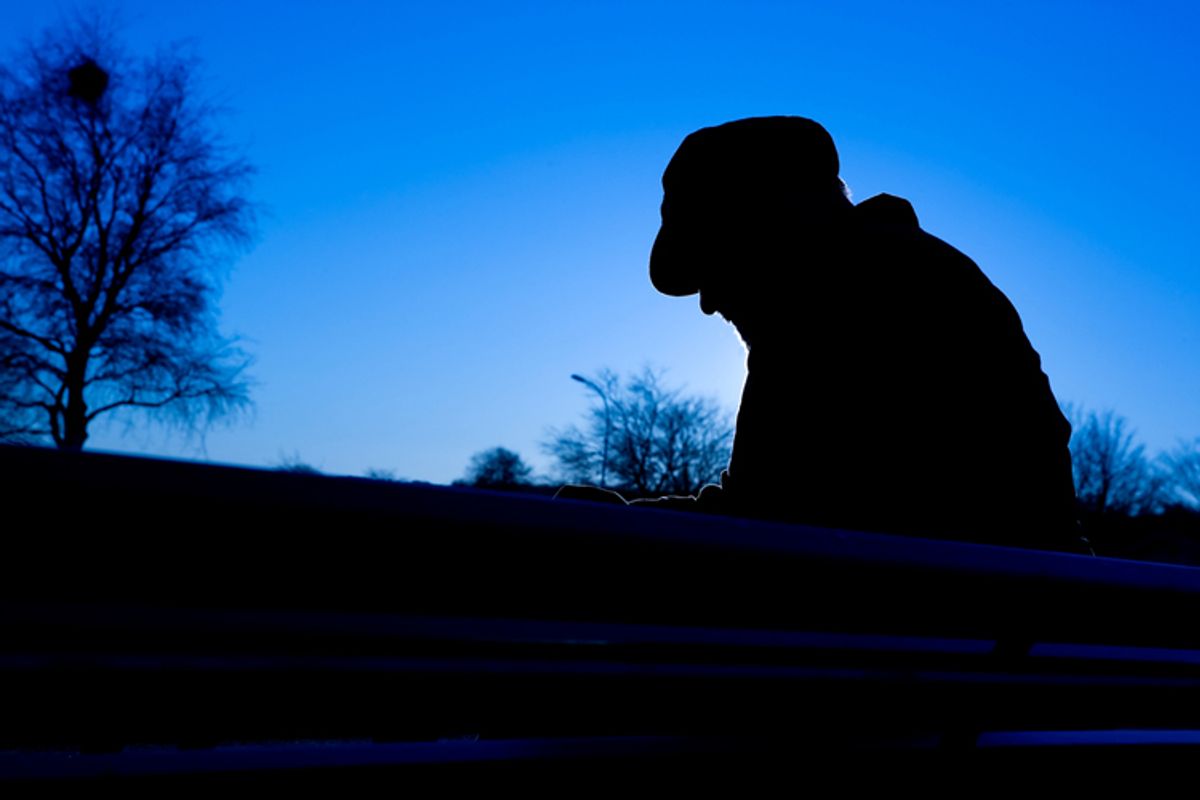 Today four mild doctors on the Upright East Side, four Mosi from Mount Sinai, tell me it's Parkinson's.

They turn my hands and watch me walk, hold one arm and elbow while making me touch finger to thumb, and they nod and query -- did you know you do not swing your right arm when you walk? -- and whisper and type, and because they are The Best I get quality eye-contact and bright sentences and a sincere promise to monitor my decay every four months from here on in.

From here on in.

Their office is between Fifth and Madison, near the Met. Nice. I go across the street to Central Park, after, to a bench below a specimen tree. Old, giant-sized, with strong, thick, twisted limbs -- I decide to visit this tree after every appointment, even when it becomes new to me, and I am ever after, even when the word Tree and the idea of Limb are lost to me, and I am just the act of seeing, the shaking green, the changeable cirrus, the oaken splendor, until I am all verb and noun and no syntax.

Not a quivering care in the world.

I post my confusion on Facebook. Kindness, in clicks and chunks. It does not penetrate. I will look again later.

I go to the New York Public Library, a few blocks away. No, I stumble there. It is cold outside so it looks like my eyes are wet and stinging from the wind. Well, good. I can be myself. I look up Parkinson's in Volume 2 of "The Gale Encyclopedia of Neurological Disorders" -- why, of course I do -- publication date 2005, page 646. Early signs: tremors (yes, severe, spreading), slow movements (yes), stiffness or rigidity (not yet). It begins on one side (yep, my entire right side, and it is starting to occur in my left hand, which means it is accelerating), the shakes increase when you rest (oh yes, nighttime is grimace city, manic movement, Pagannini palsy), and dizziness and "postural instability" when standing up (yes, going back five years; this is one of the indications that I am early onset and it is advanced; I am 56; the average age for onset for most lucky ducks is, let's see: 62).

Ah, OK. Well, shit. There is a whole sad list of signs and wonders: the reduced voice volume and impotence and foot cramps and handwriting changes and sleep disturbance -- yes yes yes yes yes -- and so much more. Let's peek at what's ahead: dementia, full body quaking, permanent rigidity, paranoia. And then there's the ineffectiveness of the drugs after things progress, and the side effects they cause: confusion, hallucinations, nausea, vomiting. I write down the names of the drugs and what kinds of drugs they are, and about mysterious and wonderful LSVT, and how this and that can slow it down, buy time for the 65- and 70-year-olds who add it to the list of What's Not Working. I look for encouragement. I find terror.

Don't look at me that way. This is my first day, my very first hours. Later I will soldier on and game face and all, that but I want to know, I need to know, what might happen to a younger man like me, a man who will still have vigor when it is stolen by spastic distortion and hideous drugs that stop working anyway.

I write down: see: David L. Cram, "Understanding Parkinson Disease: A Self-Help Guide." I hiccup a laugh and then I lose it, Niagara Falls, right there at the old wooden table, dishonest tears of hilarious self-pity for the idea of "Self-Help" when the Self has left for Siberia, or is locked up in angry, useless Jell-o. I embarrass myself, so I leave. I walk downstairs.

I call a friend who knows about grief. We chat in the musty library foyer. She talks to me in ordinary declarations and soothes me, sets me right, for about five minutes.

I walk. I think nothing. I think about forgiving someone. I think about the next three to five years, my realistic, fairly-certain window of opportunity. I let it sink in: It's Parkinson's.

I sit again. Purebred dogs on nice leather leashes. A gangly puppy comes straight at me sitting there, like He Knows. A simple-minded licking machine: There, all better. Plucked and coifed runners in lycra smug past. Students on cellphones, aging trust-fund babies. Fucketyfuckfuckfuck. I hate this part of town.

Nannies with toney strollers, cursing at the cold. Will I know my grandchildren? It's Grandpa, who speaks in vowels and makes everyone uncomfortable. I watch those damn cirrus clouds.

I walk downtown. I go ahead and wince and blink. I let my hands shake, instead of hiding it as I usually do. It's not usual, none of it, from here on in. It just is. Let's see what happens.

It's good to feel empty. Not morose, just ... blank. I am still me. Same as yesterday. I ache, though -- my chest, my jaw. I feel that grief ache -- that skull, sinuses, burning-eyes-brimming thing -- until we emerge from the Holland Tunnel and curve into the laid-out dusk of New Jersey, on the bus going back home, upstate.

The sun has set, minutes ago. I am empty empty now, smelling diesel, feeling nothing but the pull and momentum of eight wheels and 10 tons on the Garden State concrete. I look out the window -- and it's this world, see?

I am just like that switched from ache and empty to ache and wonder. All the same sensations, but now I am crazy love for the lost sunlight, for the light that's still left, the after-sunset-pure-oil-paint-bue-and-orange, reflected in a canal in Jersey, for God's sake, glimpsed from a Trailways window.

How can this be? This beauty transforms me, a beauty that needs a new word, an infinite, ancient word that has never been uttered.

I think maybe I finally know what I mean. What I always and forever mean.

I mean: I rest my forehead on the cold glass and watch this light, and I lean in and hear this new old word, as old as everything in the new old world, and it kills me. I swoon. All of this, the whole life and Earth and time, all of it. It kills me.

I mean I feel this: from here on in? Hear o Israel, all infidels and freckled babies and all lovers in covers; o best beloveds, hear me: It's not Parkinson's.

I am. I am Parkinson's. And I am not it. I am Parkinson's and OK, mortal decay, and if so then I am all in, in all I see and smell and hear and touch. And the feeling lasts, I am one even with all of the endless retail ugliness of Route 17, and this unrepentance in my ignorant hand, and yes, I am war in the trenches, down the line, sure, and I am cirrus up there in the dying light, the faux rose before the black night, and I am guilty of all I have done and will do, I am, and I am my shake and grimace and tremor, my compulsive tics and lost parts, I am, and I am the decay that is to come, OK, and I am an end, I am The End, OK, but I am not bitter. For no good reason; really just because. Because ... because the light blesses sodden ruin on a lousy waterway, because a final glow blesses me and my toxic byways; because a light, a light! is in me now and forever, until I lose all and end, and so I am Parkinson's. I am. I am the belled and forgotten and terrible beauty of my self, forgiven and forgiving, rocked on a bus, going home, indistinguishable from what I see and who I love and what the world is now, and now, and now, whole and turning under us all, and I am not lost.

No. I'm not It. I am losing It, the false and empty It that keeps us bleary and absent-minded and lost.

I focus now. I am mindful. Watch this: Lean in with me: the water, the cirrus, the last light, me, my involuntary and rebellious me, and all of this, now now now? is just all, the unknowable word known, the it world of parts made whole, and oh, oh well, yes, later I will be lost, OK, fragmented, cruelly shaken to pieces, and and and even so NOW I own all, I let all go, known and unknown, for the sake of nothing. For corpuscular photons bent by dense oxygen. The majesty of absurd reality. Silly me.

Later I will not recognize these words, I will not know this was me, here -- but now, right now, I am not lost. I am the water, I am the light, ugly and true and blazing still.

And I am Found.