Rise of the Super-Earths 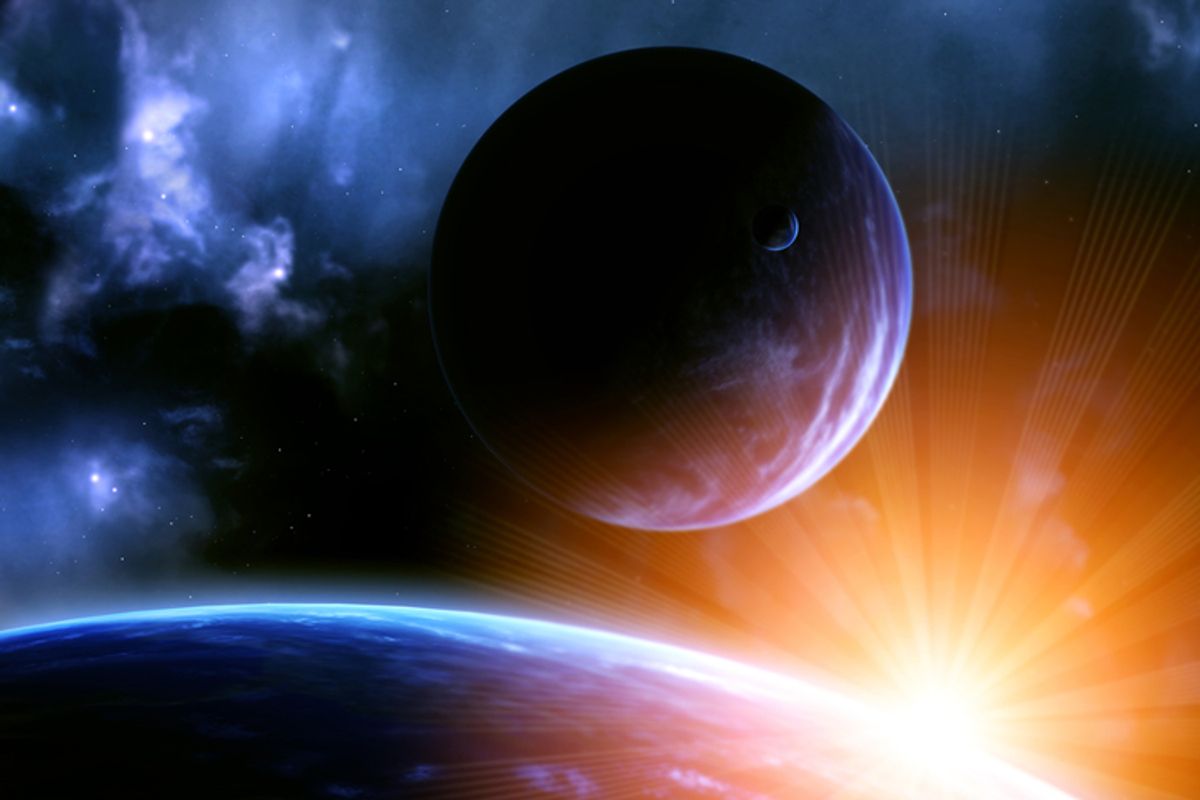 This article is an adapted excerpt from the upcoming book, "The Life of Super-Earths," available on January 23 from Basic Books.

We love our planet Earth. We should — it is our home, and there’s no place like home. There can’t ever be a better place than Earth. Plenty of serious science literature supports that view in an emotionally detached manner. It is often called the “Goldilocks hypothesis”: the Earth is just the right size (not too big, not too small) and just the right temperature (not too hot, not too cold) for life to emerge here. Life is a rare thing. Perched on our little planet, we can’t see any other out there, or at least not yet — so a certain dose of Earth-centrism seems justified. Or is it?

Life is extremely resilient once it takes hold, but it requires rich chemistry, large energy sources, and stability, right from the beginning. The comparative planetology of our Solar System makes it seem like those initial conditions are hard to come by. Earth seems perfect, whereas the rest have obvious defects. Mars is on the smallish side, lacks a substantial atmosphere and water, and is very cold (although we still hope to find life there). Jupiter is too big; its crushing pressures and element-poor environment make interesting chemistry impossible. The trouble with such a comparative analysis, however, is that it leaves out a crucial class of planets that, purely by happenstance, doesn’t occur in our Solar System.

A super-Earth is a planet that is more massive and larger than Earth, although still made of rocks — perhaps with continents and oceans — and an atmosphere. There is no such planet in our Solar System, but we know that they must be common in other planetary systems. Moreover, theory predicts that they might have all the nice attributes of Earth, and, in fact, provide a more stable environment on their surface. True super-Earths!

The first super-Earth was found by the serendipitous work of Eugenio Rivera, Jack Lissauer, and the California-Carnegie team in 2005. It orbits the small star Gliese 876 and is about seven times more massive than Earth. It is also very hot because it orbits very close to its star — only seven stellar radii, or approximately 1.7 million kilometers, away! (For comparison, this is only 3 percent of the distance from our Sun to Mercury.) Another, much colder super-Earth that is about 5 ME was discovered by J. P. Beaulieu and his team at the Paris Institute of Astrophysics.

In early 2007, Michel Mayor’s team in Geneva spotted at least three planets orbiting the star Gliese 581; two of them are super-Earths with minimum possible mass of 5 and 8 ME each, and orbital distances that are 7 percent and 25 percent of the distance from Earth to the Sun, respectively. A year later the same team reported several more super-Earths, some orbiting stars as big and hot as our Sun. The first transiting super-Earth was discovered by the CoRoT space mission in 2009: CoRoT-7b, a very hot small planet, probably similar to Gliese 876.

The preplanet structure — the “seed” of a planet — consists of solids (mostly silicates) and volatiles (such as water and ammonia), with trace amounts of hydrogen and noble gases. Due to the energy of the accretion process and the constant collisions with large solid bodies, this seed is thoroughly molten. (Some of Earth’s internal heat is a relic of this process.) In this state the structure differentiates. Iron and siderophile elements (high-density transition metals that like to bond with iron) precipitate from the silicate mix and sink under their own weight to form the core in the center. The remaining silicate minerals will remain in a mantle with the less dense ones closer to the top. Volatiles that are left over after hydrating the mantle minerals will rise to the surface and atmosphere.

Differentiation is an orderly and predictable process thanks to our knowledge of chemistry and mineral properties under pressure. Some super-Earths, the rocky ones, develop quite similarly, although the pressure in the mantle is almost tenfold higher and different varieties of minerals form. Other super-Earths, the oceanic ones, are totally exotic beasts, with oceans that are 100 kilometers deep overlying a dense hot solid water, called ice VII.

It might seem ridiculous to refer to this water as ice, given that it is at a searing temperature of 1,000 K, but under such high pressures, it forms. Water — H2O — has a familiar structure and formula, but our familiarity with it can make us overlook the fact that it is actually very complex. In common ice, the weak bonds between the molecules cause the molecules to form rings (mostly hexagons) that leave lots of empty space in between. The empty space gives it a lower density than liquid water, and so — as you know from a glass of ice water — it floats. Under high pressure the density of water increases as the molecules are forced closer together; the bonds are bent to form tighter rings, which also interpenetrate. That makes the water solid, almost irrespective of the temperature, and much denser than the liquid phase. The high-pressure ices that exist at high temperatures are known as ice VII, X, and XI; these are the ice phases we expect to find inside oceanic super-Earths. These ices are still less dense than rocks, however, so an oceanic super-Earth will be less dense than a rocky one of the same mass.

Ocean planets might be very common in the Universe because water is very common in the low-temperature environments where planets form and evolve. This might be especially true for super-Earths, which can retain volatiles more easily thanks to their larger mass and surface gravity. In order for a planet to become an ocean planet, it should form with or obtain at least 10 percent of its mass in water. Ammonia could be mixed in, but water is by far the dominant volatile chemical we see among the materials in proto-planetary disks. For comparison, Earth’s oceans are just about 0.02 percent of its mass.

An ocean planet, regardless of its surface temperature, should have the same layers inside: an iron core surrounded by a silicate-rich mantle that transitions into the hot water ice. The latter will become liquid water near the surface (the last 100 kilometers or so). The surface of the liquid water ocean will be covered with ice Ih, if the planet is far from its star and cold, like Jupiter’s moon Europa. If the planet is close to its star and hot at the surface, the liquid ocean will transition into a thick hot steam atmosphere. If the planet has moderate temperatures such as we have on Earth, the water ocean will resemble Earth’s, but there will be no continents or basalt tectonic plates under it. The interior of the ocean planet will remain under the control of the planet’s internal reservoir of heat. The transition between silicate mantle and hot water ice happens with a small change in density but no change in temperature, and the two materials have similarly high viscosity. Like the silicate mantle, the hot water ice “mantle” convects slowly.

The two families of super-Earths have planets that are diverse in size and amount of water. These characteristics depend on the mixture of elements present as the planet forms. From studying the spectra of many stars, we know that the amount of iron and other heavy elements will be different in different planetary systems. We already know that where in the proto-planetary disk a planet forms also matters. So, among the rocky planets we could find super-Mercurys — planets that have as much as 70 percent of iron core inside, like our planet Mercury. Or we could find super-Moons — planets that have no iron core, just an iron-rich mantle and perhaps a water layer.

There is a third possible family of super-Earths and terrestrial planets— carbon planets. These would be extremely rare, as they require more carbon than oxygen to be present in the planet-forming mixture. Normally carbon is half as abundant as oxygen. But astronomers have observed rare stars in which carbon is more plentiful than oxygen. A planet that forms from such a mixture will be different — it will have a mantle rich in silicon carbide and graphite in its interior. It will still have a precipitated iron core, but its overall size and the chemistry on its surface and crust will be very different. Silicon carbide is a very hardy substance — we use it to make durable ceramics, the disk brakes of sports cars, and tools for other high-stress environments. So volcanism, tectonics, and weathering are going to be minimal on carbon planets. Also, carbon planets are likely deficient in water.

Astronomy has always been about big numbers -- astronomical numbers -- and experience with big numbers has taught us that they do not guarantee inevitability. We have to go and find out for ourselves. Still, it seems likely that on some of those Earth-like planets, we will find signs of life. When we discover New Earth -- a planet we could call home -- the question of the "plurality of worlds" will come front and center, reminding us yet again that we are not the center of the universe.

Reprinted from "Life of Super-Earths: How the Hunt for Alien Worlds and Artificial Cells Will Revolutionize Life on Our Planet" by Dimitar Sasselov. Available from Basic Books, a member of the Perseus Books Group. Copyright © 2012.

Dimitar Sasselov is a professor of astronomy at Harvard University and the founder and director of the Harvard Origins of Life Initiative. His research has been covered by the New York Times, the Boston Globe and others. He lives in Boston, Mass.