Once you\'ve grown used to adventurous shows like \"30 Rock\" and \"Louie,\" the traditional sitcom feels like a relic 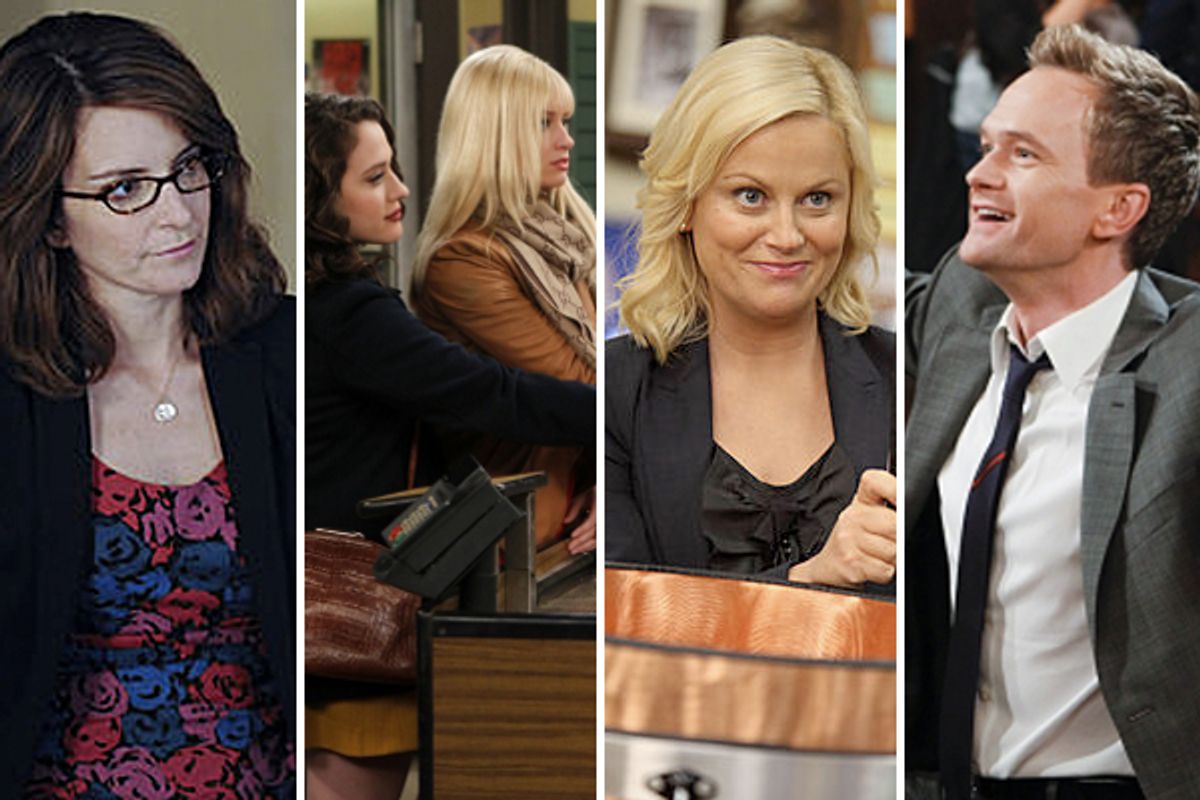 On a recent episode of "2 Broke Girls," the following writing somehow made it onto television:

Waitress: Would you like to see the menu again?

Customer: This is crap, I wanted Muenster.

Waitress: Well, I wanted to be running a Fortune 500 company instead of waiting on a toxic man-child like yourself. But we can't always get what we want, so order something else, put it in your pie hole and get on with your damn life.

I hadn’t realized my taste in comedy was so elitist until I watched some of the new multi-camera sitcoms and observed what I had assumed was an already long-dead form of comedy. When I say “new,” I’m referring to multi-camera shows that have persisted after the advent/rise of the single-camera sitcom. If, like me, you've spent recent years watching "30 Rock," "Arrested Development," "Louie" and "Curb Your Enthusiasm," it's a completely different experience to tune into talked-about shows like "Whitney," "2 Broke Girls" and "Are You There, Chelsea?"

Broadly speaking, there are two ways to shoot a sitcom. There's the traditional multi-camera style of "I Love Lucy," "The Cosby Show" and "Seinfeld" -- as seen currently on hits like "How I Met Your Mother" and "Two and a Half Men." On the other hand, "30 Rock," "Arrested Development" and "The Office" use a more cinematic single-camera shooting style. Multi-camera shows usually have a live audience or laugh track; single-camera shows dispense with the stage metaphor and have no laugh track. For you gamers, it’s somewhat analogous to the difference between a side-scrolling video game like Mario Brothers and a first-person shooter, like Halo.

A testament to my solipsism, I hadn’t seen any of the new multi-camera shows (all of which are more highly rated than those I regularly watch) until recently, when the matter was brought to a glaring point. The deeper we get into our Internet-powered, on-demand culture bubbles that let us watch only the things we care about, the more jarring it is to see things that have mainstream, popular appeal. For the past several years, I’ve been experiencing comedy in a completely cinematic form as opposed to the more vaudevillian stylings of its television roots. These single-camera shows -- even in faux-documentary style, like "The Office" -- are more polished, with music, editing, shooting styles, lenses and lighting that all aid in the creation of each show’s particular timing, realism and comedic atmosphere.

Comparatively, shows like "Are You There, Chelsea?" or "2 Broke Girls" feel simultaneously contrived -- the seams of construction are so obvious -- but also more honest in their presentation. The actors remain actors and rarely disappear into their characters. They are in makeup and hair and costume, underneath a harsh light, standing on their mark, trying to deliver jokes on cue, pausing for laughter. There’s a certain grit and intensity in relating to the actors as well as the characters they perform.

If you're accustomed to single-camera comedy, watching a multi-camera show is a startling change. Most films and shows eliminate all signs of performance, thereby boosting realism, by inserting multiple distancing layers (editing, music, specific camera lenses, etc.) between the viewer and the actor. Consider this scene from "30 Rock":

The hand-held camera, quick edits and natural lighting all aid in our acceptance of the performance and set as real, thereby helping the jokes hit their mark. If this same scene occurred on a multi-camera set, with typical TV lighting, a stationary camera and even slightly slower editing, we would suddenly be aware of Alec Baldwin instead of Jack Donaghy, and Tracy Morgan instead of Tracy Jordan.

In comparison, the actors on multi-camera shows barrel forward with fascinating vulnerability. Each actor has jokey jokes to pound out and laughs to wait for. An actor’s reliance on his partner’s performance in a scene is perhaps nowhere as clear as on a multi-cam show. All this without the helpful and flattering gauze of expensive cameras and location shooting. This might make the multiple-camera sitcom the perfect place for comic writers and actors to prove their ability, and simultaneously, since it is so exposing, the riskiest place for the untalented. You can’t hide in a multi-camera show, and unfortunately, most of these show are less than stellar. As the more sophisticated comedies have gone single-camera, we've been left without a "Seinfeld," "Cosby Show," "Dick Van Dyke" or even "Laverne and Shirley" to showcase great comic "stage" acting.

But though the writing on "Arrested Development," for example, is smarter and funnier, the simplicity of multi-camera shows is refreshing. The writing is often horrendously bad and the jokes consist mainly of characters insulting each other, but for all their sexual idiocy and reliance on racist caricatures, these shows have worth despite themselves.

When we watch these shows, we are part of an audience in a way that we aren’t in the more intimate viewing experiences that single-camera shows offer us. The theater-like form of the multi-camera show requires us to embrace artifice in an era where performance and deliberate creation are hidden.

As our society continues to create new ways to communicate while we remain in individual isolation, the multi-camera sitcom might be one of the last places many of us participate in a communal viewing experience (even if it’s a simulated one). Movies are increasingly viewed at home and hardly anyone can afford to go to live theater. As I struggled through “I Hate My Teenage Daughter,” I felt a tingle of that camaraderie that arises when we’re part of an audience.

The live studio audience, a set that is very obviously a set, or even a laugh track, as simple and stupid and taken for granted as it is, are subtle and powerful tools that shape our viewing experience. An agreement between the actors, the set and the audience is loud and clear: We’re putting on a show for your entertainment. For 21 minutes we experience, in the teeniest-tiniest way, the essence of comic theater. Let's hope someone remembers what these shows can be and makes one that's actually worth watching.

30 Rock Are You There Chelsea? Chelsea Handler Sitcoms Television Tv