The secret history of "lover's eyes" 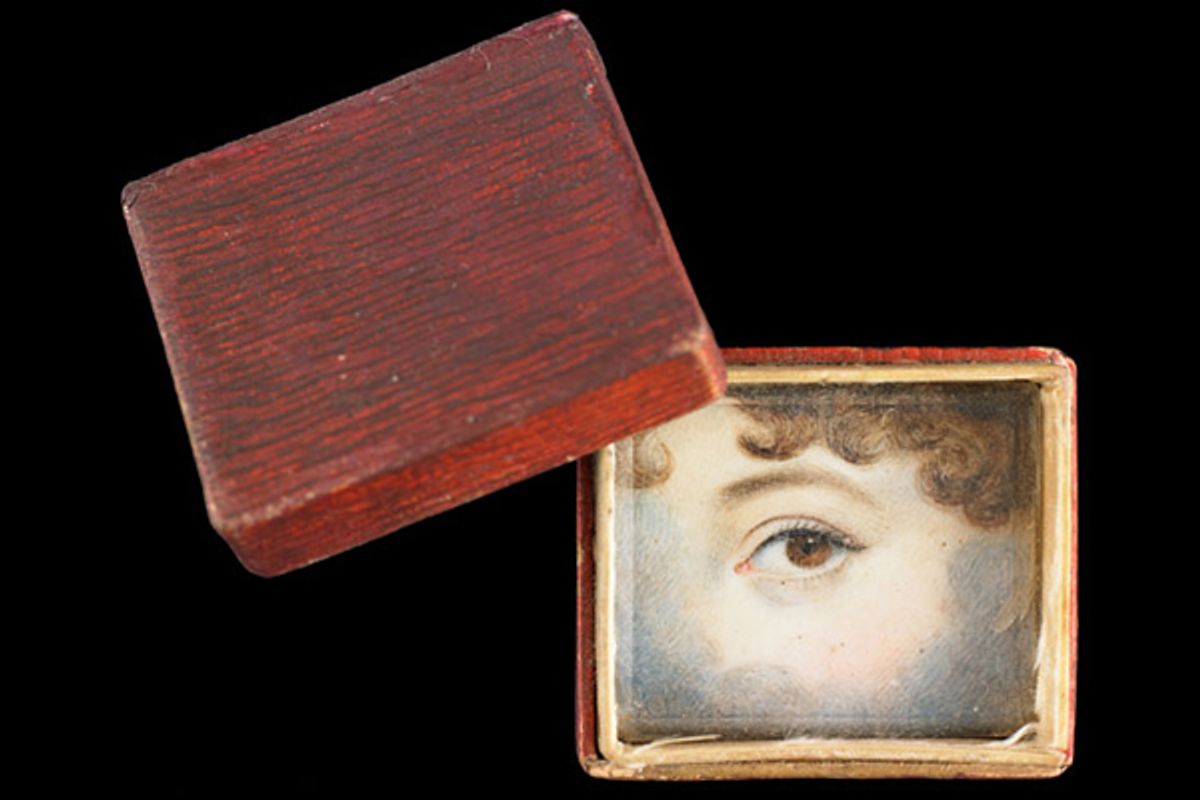 In the 18th and 19th centuries, wealthy British and European lovers exchanged "eye miniatures" -- love tokens so clandestine that even now, in the majority of cases, it is impossible to identify their recipients or the people they depict.

Experts believe that there are fewer than 1,000 "lover's eyes" in existence today. Of that small surviving hoard, the largest single collection belongs to the Skiers of Birmingham, Ala. David Skier, an eye surgeon, and his wife, Nan, have been collecting "lover's eyes" for decades -- and their collection will go on display for the first time ever at the Birmingham Museum of Art next month.

Over the phone, curator Dr. Graham Boettcher outlined the history and uses of these petite, jewel-like paintings. The accompanying slide show highlights some particularly splendid examples from an altogether remarkable collection.

Can you give us a brief history of these so-called "lover's eyes"?

According to lore, the story of lover's eyes goes back to the end of the 18th century, when the prince of Wales -- who later became George IV -- became smitten with a twice-widowed Catholic woman named Maria Fitzherbert. He courted Maria Fitzherbert rather unsuccessfully at first; he kept trying to win her affection and profess his undying love to her, and she wasn't really going to have any of that. Finally, he staged a kind of half-hearted suicide attempt (I think it was more of a cry for help than an earnest effort to take his own life) -- and then she reluctantly agreed to marry him. But shortly thereafter -- I think really the next day -- she came to her senses and realized what exactly she had done by consenting to marry the prince of Wales, which of course was totally illegal according to the laws (first of all, the king had to consent to the marriage of the heir to the throne, and second, he would never have consented for the prince to marry a Catholic, let alone a twice-widowed Catholic six years his senior).

So Fitzherbert fled to the Continent, trying to escape George's attention, but he didn't give up. On Nov. 3, 1785, the prince wrote to Mrs. Fitzherbert with a second proposal of marriage. Instead of sending an engagement ring, as we might expect today, he sent her a picture of his own eye, set in a locket, painted by the miniaturist Richard Cosway, one of the celebrated artists of the day. At the time, they referred to these pieces as "eye miniatures"; today we call them "lover's eyes," but that wasn't a period term -- that's a term coined by the New York-based jeweler Edith Weber, who's handled a lot of these over the years.

Anyway, George sent a note with this eye miniature, and it said: "P.S. I send you a parcel, and I send you at the same time an eye. If you have not totally forgotten the whole countenance, I think the likeness will strike you." It's not known whether it was the letter or the eye that changed Mrs. Fitzherbert's feelings precisely, but shortly after that, she returned to England and married the prince in a secret ceremony on Dec. 15, 1785. Soon, the fad for these eye miniatures began to catch on -- so this episode is, according to legend, the genesis of the eye miniature.

There is some evidence to suggest that these had appeared in France a few years earlier, and that the Brits were only adopting a French invention; I think the jury's still out. In any event, the love affair between the prince of Wales and Maria Fitzherbert popularized these objects and spawned a fad that lasted well into the 1830s -- and even later, past Queen Victoria, who was known to have commissioned a number of these objects during her reign. There are even artists to this very day who are painting lover's eyes. One is the great-great-grandson of the famous Philadelphia portraitist Thomas Sully; he's sent me a picture of a miniature he's working on. Rather than paint on elephant ivory, which of course wouldn't be legal nowadays, he paints on mastodon ivory. He also points out that he usually has them commissioned by faithful spouses, not lovers or mistresses.

The original idea was that, by only showing an eye, these miniatures would effectively conceal the identity of the person who was shown, right? This way, the miniatures could be worn or exhibited publicly?

Exactly. Only someone with really intimate acquaintance -- a lover, a spouse, a close family member -- would recognize an individual's eye, so they could be worn in a more open way. They didn't have to be encased inside of a locket. There are rare instances in which we do know the identity of the subject, because of an iron-clad provenance or documentation, but typically we can only tell if there's an inscription.

Some of the eyes in the Skier Collection have inscriptions that reveal the identity of the sitter, but still, oftentimes these will be fairly generic; it'll just say the name of the individual -- and if it's a memorial piece, it might give the date they died and how old they were. Through genealogical research, we've been able to discover the identity of certain people, but some of the names are a little too generic; we're only able to establish certain identity in a handful of cases -- and I think that's by design. That was really the intent of these things, to keep the identities secret.

How did the Skiers start collecting these objects?

Nan and David Skier started collecting "lover's eyes" about 20 years ago -- and I think you'll love this detail: David Skier is a prominent opthamologist here in Birmingham. So he's someone who deals with eyes all day long. They came across their first lover's eye at an antique show in Boston, and were just utterly captivated by it. (The first eye that they saw was a really exquisitely rendered one: quite early, from 1790, with a blue enamel surrounding -- often associated with eyes that were commissioned by and for the nobility. It's also encrusted with diamonds and pearls.)

When the "Antiques Roadshow" came to Birmingham, one of the appraisers on the show, Barry Weber (to whom the catalog is dedicated -- he passed away recently) approached the Skiers about doing an educational segment on lover's eyes, and of course they were happy to share their collection; that was the first time the collection received any sort of notoriety.

And this is the first time this collection has been exhibited in a museum?

That's correct. This is the largest exhibition of its kind. There are certainly a few museums here and in Britain that have small collections of lover's eyes but display them with their permanent collection; I think Philadelphia has about 30 or so eyes, and the Metropolitan Museum of Art has a few in their collection, as do the Royal Collection and the Victoria & Albert in London. But this collection is three times larger than any institutional collection.

Because these things are tiny, I think a natural impulse on the part of exhibition designers would be to put them all in one case -- but then you can take them all in in an instant, which doesn't really do justice to the artistry that went into making these. Each one is so carefully rendered, and they all tell very different stories.

"Look of Love: Eye Miniatures from the Skier Collection" will be on view at the Birmingham Museum of Art in Birmingham, Ala., from Feb. 7 through June 10, 2012.