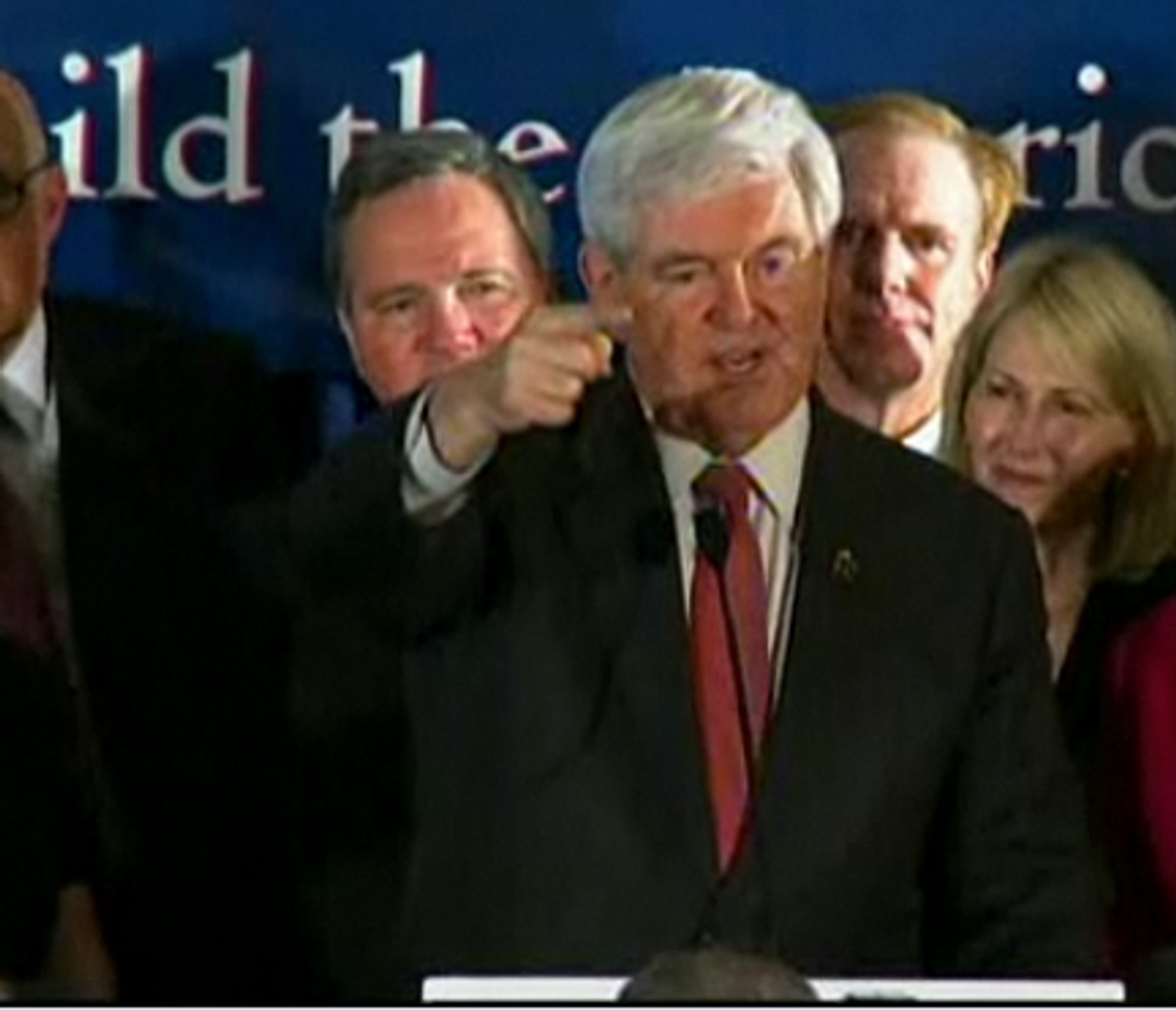 After getting blown out in Iowa on Jan. 3, the former House speaker all but announced he was transforming his presidential campaign into a one-man crusade to exact maximum vengeance on Romney, whose super PAC allies had crushed Gingrich’s December surge with a barrage of negative attacks. Gingrich then suffered through a predictably miserable week in New Hampshire before moving to friendlier turf in South Carolina, where he completed one of the more improbable turnarounds in modern presidential campaign history on Saturday night with a startlingly lopsided victory over Romney.

The outcome severely complicates – and potentially imperils – Romney’s march to the Republican nomination. As the week began, he seemed positioned to post his third victory in as many contests in South Carolina, a feat that no previous GOP candidate had achieved and that would have essentially ended the race on the spot. But with his defeat, which came after some of Romney’s most problematic general election baggage was exposed, Romney’s standing in national GOP polls and in the next primary state – Florida, which votes on Jan. 31 – figures to plummet. Questions about his appeal to the Republican base and his vulnerabilities in the fall will invite new and intense scrutiny.

The good news for Romney is that he can probably make most of his troubles – not to mention Gingrich himself – go away with a solid win in Florida. The bad news is that Florida will look infinitely more imposing to him at the start of this coming week than it did at the start of this past one, when polls showed Romney opening a lead of more than 20 points. But the poll numbers in Florida, as elsewhere, have been absurdly volatile; it was just over a month ago that Gingrich enjoyed a 27-point lead over Romney. So the race in the Sunshine State should tighten dramatically in the days ahead, if it hasn’t already.

What’s more, Florida proved itself in the 2010 elections to be particularly hospitable to the Tea Party strain of Republicanism that powered Gingrich’s South Carolina surge – and that has long been suspicious of Romney. In that year’s GOP gubernatorial primary, Rick Scott, a Tea Party-aligned outsider with a troubled past whose nomination state and national party leaders feared and strongly discouraged, defeated Bill McCollum, a well-credentialed political veteran with broad support from the party establishment. On the surface, at least, the dynamics of a Romney-Gingrich battle are rather similar.

Disrupting Romney’s easy glide to the nomination and forcing him into such a precarious position gives Gingrich at least a measure of the revenge he’s coveted. The question, though, is whether he can parlay his South Carolina moment into a serious push for the Republican nomination.

It’s anyone’s guess what will happen next, but four basic scenarios seem most plausible right now:

1. Mitt rights the ship: Romney did his best to project confidence and steadiness in his concession speech. What he seems to be counting on is that the GOP’s opinion-shaping class will respond to Gingrich’s win Saturday night the same way it responded to his surge in early December: with panic.

Much has been made of the role the pro-Romney super PAC played in undermining Gingrich last month, and for good reason. But his poll numbers didn’t just collapse in Iowa, where the ads aired; they fell everywhere. That points to the role played by many of the right’s leading voices, commentators, activists and elected officials who remember with horror Gingrich’s run as House speaker in the 1990s and who used their platforms to lash out against him. Their warnings trickled down to rank-and-file Republicans, who began to get cold feet.

That basic pattern, in fact, has played out multiple times during the GOP campaign, with nervous party elites helping to beat back surges from candidates they saw as unfit for the nomination. Romney clearly hopes the elites – and his super PAC buddies – will do some dirty work for him again now, arresting Gingrich’s post-South Carolina momentum and leaving Romney in position to score a Florida victory that would silence the doubts about his viability.

2. Newt supplants Mitt: On the strength of victories in Iowa* and New Hampshire that really weren’t that impressive, Romney’s national support practically doubled and he opened large leads in South Carolina and Florida. In the wake of South Carolina, though, he’ll experience the flip side of this, with his numbers tanking, just as Gingrich’s rise. So it can’t be ruled out that Gingrich will roll his sudden momentum into Florida, capitalize on the state’s Tea Party-friendliness, and engineer an equally impressive follow-up triumph – one that might lift Gingrich into a clear lead nationally and in the next wave of states.

3. The long slog: Or maybe the Florida result won’t prove much at all. The scenario is that South Carolina firmly establishes the GOP contest as a two-man race, with the Tea Party wing of the party largely uniting around Gingrich and everyone else siding with Romney. The two men would then trade wins and losses through a drawn-out, virtually momentum-less primary season – one reminiscent of Hillary/Obama 2008, Hart/Mondale 1984 and Reagan/Ford 1976. The wild card in this would be Ron Paul, whose strategy of targeting small and midsize February caucus states and gobbling up their delegates could make him much more relevant to the race than he’s been.

4. The chaos theory: This is the really fun one, and the least likely. But after Saturday night, it at least warrants a mention. The basics: What if Romney suffers such a bad loss in Florida that his campaign melts down completely and elite Republicans lose confidence in his ability to stop Gingrich? If they really are committed to stopping the former speaker, these elites would then be in need of a Plan B, leading to the “white knight” scenario – a new candidate drafted into the race who could qualify for the late big-state primaries and to prevent Gingrich from racking up the delegates he’d need for a first ballot nomination. There are many reasons to sniff at this possibility, not the least of which is that it’s unclear if the GOP has any candidate on the sidelines who’d be capable of this. But if Mitt can’t get the job done in Florida, expect to hear it mentioned a lot.