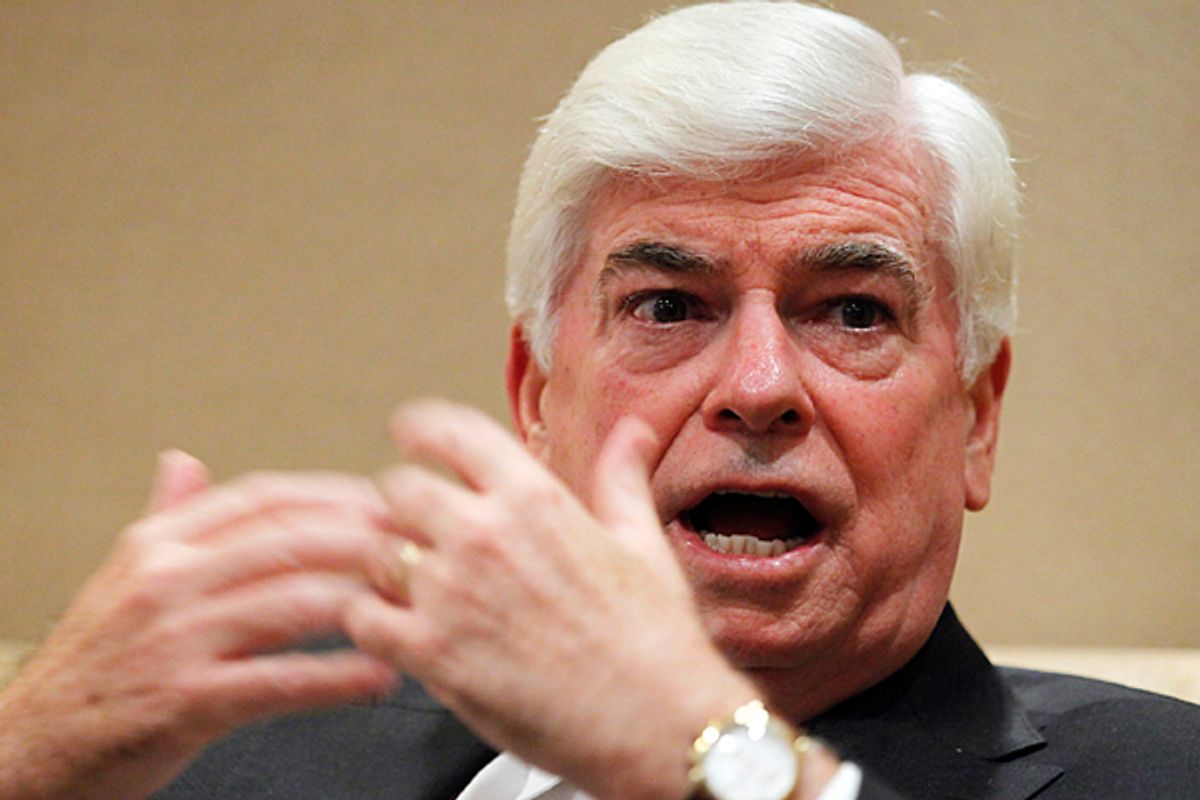 With the (at least temporary) shelving last week of the Stop Online Piracy Act (SOPA) and the Protect Intellectual Property Act (PIPA), Hollywood was dealt a defeat following a backlash led by Internet giants Google, Wikipedia and others.

Candidly, those who count on quote 'Hollywood' for support need to understand that this industry is watching very carefully who's going to stand up for them when their job is at stake. Don't ask me to write a check for you when you think your job is at risk and then don't pay any attention to me when my job is at stake. ...

I would caution people don't make the assumption that because the quote 'Hollywood community' has been historically supportive of Democrats, which they have, don't make the false assumptions this year that because we did it in years past, we will do it this year. These issues before us -- this is the only issue that goes right to the heart of this industry.

The premise of Dodd's comments is that campaign contributions are essentially transactional, and that Hollywood money comes with an implied -- or perhaps explicit -- quid pro quo. That's how one would expect watchdog or good government groups to talk about the world of campaign finance, but it's striking coming from Hollywood's top lobbyist, particularly a man who spent three decades in the U.S. Senate. Dodd is speaking from experience.

In response to his comments, a petition has been created on the White House website asking the Obama administration to investigate Dodd for "bribery." It has 17,000 signatures after two days.

An MPAA spokesman defended Dodd's comments, telling the Hollywood Reporter, "Senator Dodd was merely making the obvious point that people support politicians whose views coincide with their own. When politicians take positions that people disagree with, those people tend not to support those politicians."

But what about Dodd's core point, that Democrats might be risking their historical base of financial support in Hollywood?

As we explored last year, Hollywood executives like Jeffrey Katzenberg and Steve Bing are among the biggest donors to Democratic super PACs. And that money has apparently bought a measure of deep support. It was instructive last week that far more Republican senators than Democrats declared their opposition to PIPA amid the online protests against the bill.

That state of affairs has some GOP strategists already salivating at the idea of tapping Silicon Valley as a source of future campaign support. By the end of the 2012 campaign, we should have a better sense of how this dynamic is shaping up, and whether there will be a softening in Hollywood support for Democrats.