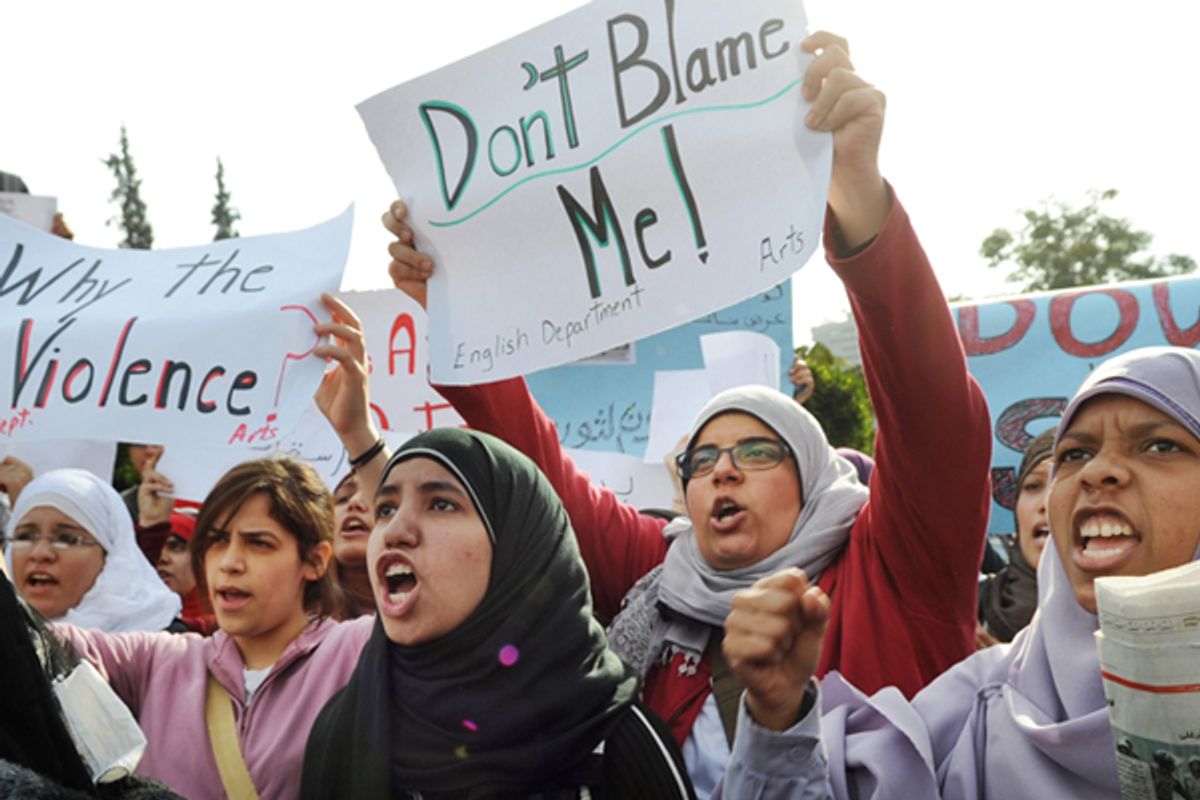 Half a world away from the Republican presidential primaries where candidates vie to outlaw birth control and promote abstinence, ban pornography and condemn the “sin” of homosexuality, Egypt’s first post-revolution parliamentary election was, thanks to the Islamists, dominated by similar issues.

As the first anniversary of the revolution approaches this week, Egypt is facing a spate of urgent political, social and economic issues, such as mass youth unemployment, a tanking economy and a cabal of die-hard generals who just refuse to call it quits.  But you wouldn’t know it from listening to the discourse of Islamists, particularly the hard-line Salafist Nour party, which has focused attention on issues of “morality,” including talk of banning booze, prohibiting or restricting bikinis and censoring “sex scenes” in Egypt’s vibrant film industry.

Although women from all walks of life have been at the forefront of the popular uprising and are treated as relative equals by the revolutionary youth movement that has orchestrated the revolution, the burden of this moralizing, as is often the case, has fallen on the shoulders of women. This has led Egypt’s secular, liberal women and feminists to look to the immediate future with a mixture of apprehension and worry.

“When Egyptian media spends hours and hours discussing bikinis and alcohol with presidential candidates, it tells you where women are going,” says Marwa Rakha, an Egyptian writer, broadcaster and blogger. “After the revolution, we saw women exposed to humiliating virginity tests, fired at, beaten up, arrested, molested and stripped naked by army officers. Why would I be optimistic?”

But why is Egypt’s Islamic right so obsessed with sex and women, and seems to view both as the root of all evil?

Rakha sees a cynical populist ploy. “They want attention, lights and media presence. How else will they get there unless they talk about women and their evil bodies?” she said.

“These are issues that people can relate to on a personal level,” explains Karima Abedeen, a secular British-Egyptian living in Cairo. “They are also vague and not quantifiable and most of the people who use these issues as their platform haven’t a clue about how to solve any of the other, more urgent social and political issues.”

On a more ideological plane, Muslim conservatives have successfully painted sexual liberty and gender equality as a Western import designed to weaken Egypt’s Islamic identity and corrupt Egyptians. The argument is that only by embracing Islamic traditions and morals wholeheartedly can Egyptians resist Western hegemony and recaputure their past glory.

“Focusing on issues of morality sends a message to the community that parties like the Muslim Brotherhood and the Salafis will protect our Islamic identity against the Western identity, which liberals try to promote,” observes Gihan Abou Zeid, an Egyptian activist and feminist who is working on a book about the women who took part in the revolution. “Many Egyptians believe that following Islamic orders would fix many of the current challenges that Egypt is facing.”

In this, Islamists and their supporters are confusing the symptoms with the disease.  The reason Egyptian society is failing its people is not because it has veered too far from tradition, but because it has not embraced secular modernity enough, resulting in the relative marginalization not only of women but of young people too.

Similar to America's Christian fundamentalists, Egypt's Islamists and other social conservatives are alarmed by the corrosion of the traditional patriarchal order caused by the increasing emancipation of women. The loss of centuries of male privilege, especially in the public sphere, that this entails fuels the panicky public obsession with what should be private issues, such as virginity and promiscuity. In this worldview, strong, independent women are regarded with suspicion, as if they are carrying a volatile sex bomb that will explode upon contact with freedom and shred the fabric of society in its wake.

But despite the clear similarities between social conservatives in Egypt and America, the social context in which they operate is quite different. Egyptians on the whole may not necessarily be more religious than Americans, who seem far less inclined to abandon their faith than Europeans, but Egyptians interpret their faith far more traditionally.

Secularization has progressed much further in America than in Egypt, where it has been partially discredited through its association both with Western neo-imperialism and the corruption and failure of Egypt’s secular dictatorships. American Christian fundamentalism is a movement founded on freedom and imperial swagger, whereas Egyptian Islamism is a reaction to weakness and decline. The people who have been stripped of power in society for decades are focusing on those few areas on which they have been able to exercise control, i.e., “morality.”

Whereas religion is a fairly flexible and personal affair in America, in Egypt, religion, or tradition, is more often than not about conformity. And those who challenge this hegemonic view often suffer for their “indiscretion,” as witnessed by the massive overreaction by Egyptian society pretty much in its entirety to the decision by a bold art student, Aliaa Elmahdy, to post naked images of herself on her blog to protest the growing Islamization of society and to demand freedom of expression.

This traditionalist mind-set also partly explains the paradox that, although millions of Egyptian women have entered academia and the workforce, often outdoing and outperforming men, they have not become sexually freer but have had to compromise by stressing their “virtue” through adoption of the hijab. As men lose control of women in the public sphere, they try harder to control them in the family, suggests Abou Zeid.

Even Egypt's secularists, although they view women more as their equals, share the Islamists' objectification of the female form. “The secularists and the conservatives are two faces of the same coin when it comes to women,” concludes Rakha. “Most of the politicians in both currents objectify women; one side wants to cover us and lock us up, while the other wants to strip us naked and show us off.”

That said, there are significant differences between the right-of-center and heterogeneous Muslim Brotherhood’s Freedom and Justice Party (FJP) and the Salafis. For example, Abou Zeid points to the fact that the Brotherhood is not against women working, albeit within limits, but the Salafis want them to “return” to the home.

The Salafis, she also adds, want to force women to cover their faces, as demonstrated by their vigilante “morality police,” who have been roaming rural areas of Egypt, though, fortunately, Egyptian women have been fighting back.

In addition to the likelihood that the FJP will align itself to liberal, albeit economically conservative parties, the wind is not yet out of the sails of the secular revolutionaries who have so far spearheaded change in Egypt, as illustrated by the defiant “Revolution Continues” movement.

One consequence of the revolution is that it has empowered the previously marginalized, namely the young and women, and made them believe that they can be agents of their own destiny. “Attitudes toward women are better among the young generation, particularly the middle class, to which most of the politically active women belong,” notes Abou Zeid.

Abedeen also believes that once Egyptians see what the Islamists are like in power, they will soon fall out of love with them.

“I am trying to stay positive and tell myself that it is natural that people should gravitate toward a more conservative option, hoping that these people will not be corrupt,” she says. “I am hoping, down the road, that people will realize that is not the way forward for Egypt.”

It will be largely up to Egyptian women to carve out their rightful place in society.

“Looking at Egypt now, I see a lot of courageous defiant women, but I also see millions who realize how oppressed they are, yet do nothing about it,” says Rakha. “It is up to each woman on her own, in her house, at her desk, in her car, on her way to and from places. This is an individual fight whose collective gains and losses will reflect on the status of Egyptian women.”