The Wall Streeters Obama loves most

The president may call them "fat cats" in public, but far too many of his closest advisors are former bankers 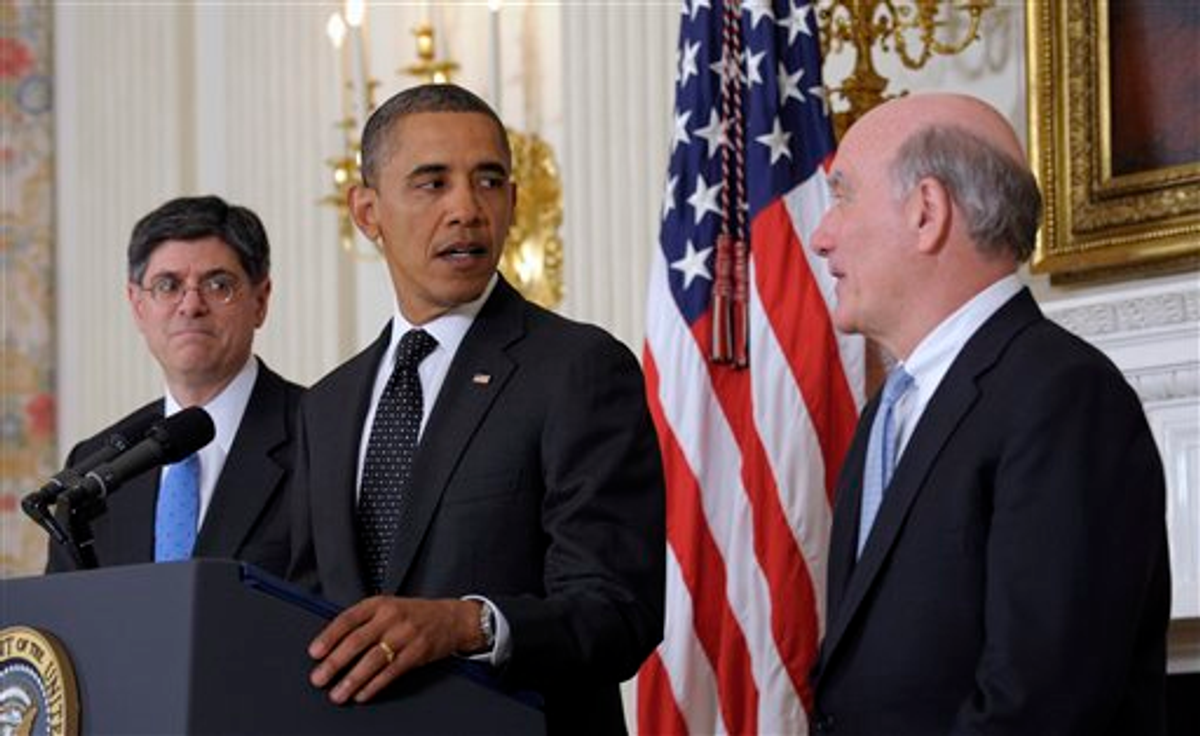 We’ve already made our choice for the best headline of the year, so far:

When we saw it on the website Gawker.com we had to smile -- but the smile didn’t last long.  There’s simply too much truth in that headline; it says a lot about how Wall Street and Washington have colluded to create the winner-take-all economy that rewards the very few at the expense of everyone else.

The story behind it is that Jack Lew is President Obama’s new chief of staff -- arguably the most powerful office in the White House that isn’t shaped like an oval. He used to work for the giant banking conglomerate Citigroup. His predecessor as chief of staff is Bill Daley, who used to work at the giant banking conglomerate JPMorgan Chase, where he was maestro of the bank’s global lobbying and chief liaison to the White House.

Daley replaced Obama’s first chief of staff, Rahm Emanuel, who once worked  as a rainmaker for the investment bank now known as Wasserstein & Company, where in less than three years he was paid a reported eighteen and a half million dollars.

The new guy, Jack Lew – said by those who know to be a skilled and principled public servant – ran hedge funds and private equity at Citigroup, which means he’s a member of the Wall Street gang, too.  His last job was as head of President Obama’s Office of Management and Budget, where he replaced Peter Orzag, who now works as vice chairman for global banking at – hold onto your deposit slip -- Citigroup.

Still with us? It’s startling the number of high-ranking Obama officials who have spun through the revolving door between the White House and the sacred halls of investment banking. Sure, you can argue that it makes sense that the chief executive of the nation would look to other executives for the expertise you need to build back from the disastrous collapse of the banks in the final year of the Bush Administration.

Remember -- it was Bush and Cheney with their cronies in big business who helped walk us right into the blast furnace of financial meltdown, then rushed to save the banks with taxpayer money. That little fact seems to have been overlooked in the current primaries.

All this brings back memories of Hank Paulson, doesn’t it? Hank Paulson, the $700-million man who became secretary of the treasury for President Bush. Paulson had been head of Goldman Sachs, the rich investment bank.  As his successor at Goldman Sachs, Paulson chose Lloyd Blankfein. Several times, according to Bloomberg News, Rolling Stone,and Paulson’s own memoir, the treasury secretary made sure Blankfein and Goldman got privileged inside information.

But Bush and Cheney aren’t the only ones to have a soft spot for financiers. President Obama may call bankers “fat cats” and stir the rabble against them with populist rhetoric when it serves his interest, but after the fiscal fiasco, he allowed the culprits to escape virtually scot-free. When he’s in New York he dines with them frequently and eagerly accepts their big contributions.  Like his predecessors, his administration also has provided them with billions of taxpayer dollars – low-cost money that they used for high-yielding investments to make big profits. The largest banks are bigger than they were when he took office and earned more in the first two-and-a-half years of his term than they did during the entire eight years of the Bush administration. That’s confirmed by industry data.

And get this. It turns out, according to The New York Times, that as President Obama’s inner circle has been shrinking, his “rare new best friend” is Robert Wolf. They play basketball, golf and talk economics when Wolf is not raising money for the president’s campaign.

Robert Wolf runs the U.S. branch of the giant Swiss bank UBS, which participated in schemes to help rich Americans evade their taxes. During hearings in 2009, Michigan’s Senator Carl Levin, chairman of the permanent subcommittee on investigations, described some of the tricks used by UBS: “Swiss bankers aided and abetted violations of U.S. tax law by traveling to this country with client code names, encrypted computers, counter- surveillance training, and all the rest of it, to enable U.S. residents to hide assets and money in Swiss accounts.

“The bankers then returned to Switzerland and treated their conduct as blameless since Swiss law says tax evasion is no crime. The Swiss bank before us deliberately entered United States, actively sought U.S. clients and secretly helped those U.S. clients defraud the United States of America.”

And so it goes, the revolving door between government service and big money in the private sector spinning so fast it becomes an irresistible force hurling politics and high finance together so completely it’s impossible to tell one from the other.