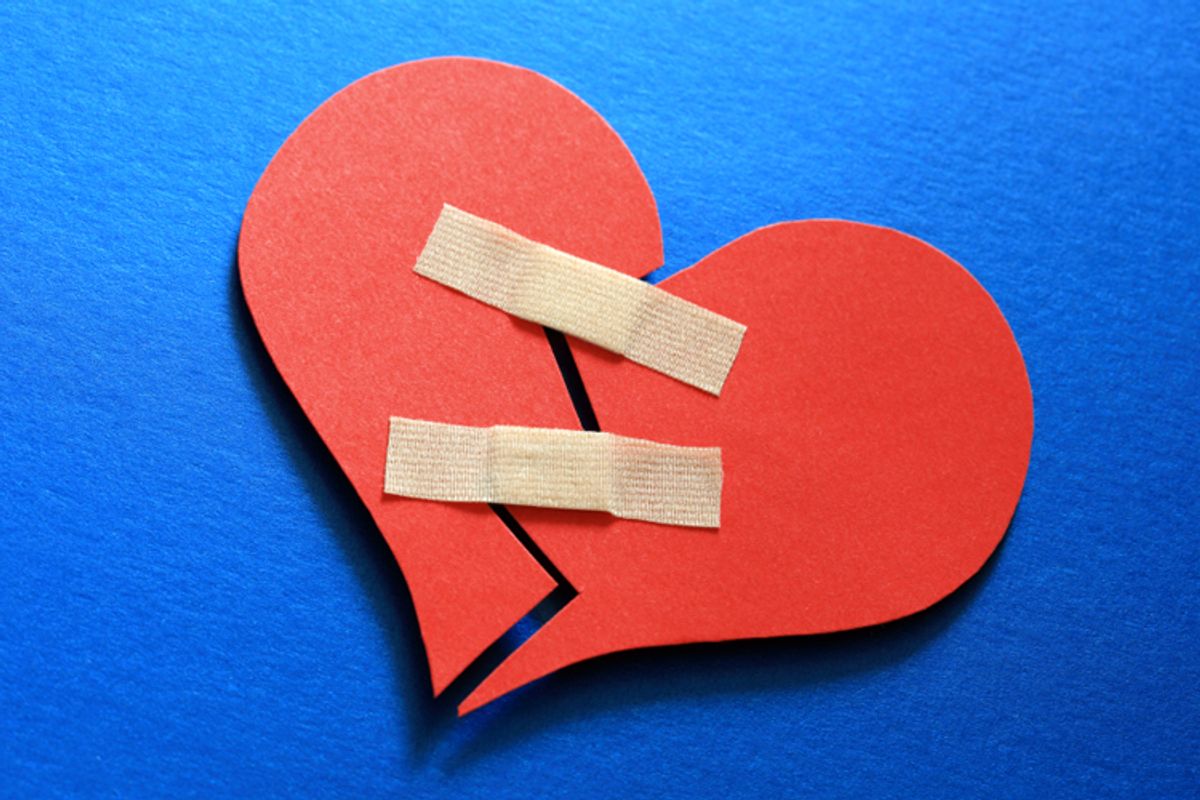 It brought them closer, opened new lines of communication and made for the hottest sex of their life. This life-changing "it" wasn't a miracle advice book or sexy new lingerie, but an affair. "Honestly, it may sound crazy, but I recommend what happened for every marriage," says Carissa, a 30-year-old stay-at-home mom from New Jersey. "Well, maybe not exactly infidelity, but you never know how strong you are as individuals and as a couple until you hit rock bottom and you are forced to give up or fight."

The specter of cheating looms large these days – both in terms of high-profile cheating scandals and disheartening real-world statistics. It's led some, myself included, to reconsider just how realistic lifelong monogamy really is and whether a better alternative exists. But there's another story here that deserves telling -- that of couples who experience an infidelity and recover from it.

I'm not talking about people who simply stay together for the kids, resenting each other the whole way. I mean partners that come together after an affair and manage to restore the relationship to its previous -- and sometimes even better -- working condition. As the immensely quotable author of the advice column Dear Sugar once wrote, "Sometimes the thing you fear the most in your relationship turns out to be the thing that brings you and your partner to a deeper place of understanding and intimacy."

It's near impossible to say just how often this actually happens. Even numbers on the percentage of couples who stay together after an affair is revealed is sketchy (let alone how many actually get to a better place): Estimates range from 35 to 75 percent. (There is a similarly yawning range of estimates of how many marriages experience infidelity.) But, as many couples' counselors tell it, it comes as a shock to many that it ever happens.

The story leading up to Dan's affair is a familiar one: They had both become so bogged down by financial stresses and caring for their two kids that they didn't have time for each other anymore. Out of desperation, Dan took a seven-day-a-week job overhauling a flooded mall. His absence wore on Carissa, who was then eight months into a painful pregnancy. Whenever she asked him to spend more time at home, he assumed that she just wanted a break from the kids. They had become so distant from one another that, as he told me, "I thought our marriage was over."

Around this time, an ex-girlfriend got back in touch with him and after some back-and-forth, they met up, twice, he says. The second time, they were hanging out at her house when, without much fanfare, she leaned over, unbuttoned his pants and gave him a blow job.

Carissa was devastated when she found out about his cheating -- as a result, she says she barely even remembers the first months of her son's life. Just over a year later, though, things could not be more different: She says their marriage is better than it ever was.

Unbelievable as it sounds, Esther Perel, a therapist and author of "Mating in Captivity," has seen this unexpectedly positive post-infidelity transformation before -- although it often takes a lot of work and a lot of time.

Curious about how those who attempt to stay together fare "once out of the therapist's benevolent gaze," she spent years interviewing couples whom she previously treated. "I already knew the marriages I was tracing in these follow-up interviews had survived; now I wanted to assess the quality of that survival," she wrote in an article for the Psychotherapy Networker. Plenty manage to stay together without ever transcending the affair – some "never really get past the affair" or "they pull themselves up by the bootstraps and let it go." For a third group, though, "the affair becomes a transformational experience and catalyst for renewal and change."

Perel wrote of one such couple, Claire and Julian: She was often stressed and rarely in the mood for sex; his overtures were turned down more often than not. "With so many no's ringing in his ears, Julian welcomed the resounding yes from Emma, whom he met on a business trip and continued to sleep with for a year and a half," says Perel. "It wasn't just that he wanted more sex: he wanted to recapture the feeling of playfulness and freedom that sex used to allow him."

Claire was distraught when she discovered the affair, but she also didn't want to lose him. "So she reached out to him, and they talked with each other as they hadn't done in years, sharing feelings and thoughts that had long been tucked away," writes Perel. "As the conversations evolved and they began to narrow the distance between them, they felt awakened into a new experience of connection, in which they felt both great pain and excitement, as they never had before." Five years later, things are looking up: "The affair was a shock that forced us to get unstuck," Julian told her.

One of the crucial characteristics common to couples who manage to leave the affair in their dust is that they look at it in terms of "what it meant for me, what it did to you and what it will be for us," she told me by phone. "It becomes a story of 'us.' They do not stay stuck in the language of 'perpetrator' and 'victim.'" Instead, as she explains in her article, "Each one takes appropriate responsibility for the deterioration of the relationship, focusing not only on mending the breach produced by the affair, but on rebuilding the emotional foundation of the marriage," she says. "Such couples tend to identify the affair as one event -- but not the definitive event -- in their history together."

Perel says that it's vital for both partners to engage in this introspection -- it isn't just the cheater's responsibility. "People who've been able to see that maybe there were other kinds of betrayal that were not just about the affair -- there was neglect or indifference or contempt or sexual blockage," she says. "They are able to look at how an affair can be a betrayal for one person and at the same time an expansive experience for the other."

Janis Spring, a psychologist and author of "After the Affair: Healing the Pain and Rebuilding Trust When a Partner Has Been Unfaithful," says that understanding why it happened is crucial. "It could be an underlying resentment that 'you've never been gracious to my family' or 'you've always made me feel less than you,'" she says. "Maybe one person felt ignored and lonely in the marriage and never spoke up about that or maybe his wife has never really taken his grievances seriously." By understanding the "why" of the affair they can learn where their vulnerabilities lie and help prevent it from happening again.

Sarah, co-founder of the online support group Survive Infidelity, says that she rarely sees couples recover from an affair unless there's "virtually full disclosure within two to three conversations" -- no fibs to protect the other's feelings, or one's own image. But Perel emphasizes that "trust isn't knowing all the details." Sometimes, in fact, it means "living with what you'll never know." She says, "It's the people who are able to switch from a detective mode to an investigative mode who are successful. It's not, 'What did you do, where did you go, what bed did you sleep in, how often did you fuck him and what position?' but more, 'What did it mean for you? What did you find there? Why did you think you were able to experience that there and not here?"

When Carissa found out about her husband's lying -- by searching through his phone bill -- she got on her knees and, through her tears, begged him to tell her everything. Dumbfounded by her pain, he told her, "I had no idea you felt that way"; he thought she only valued him as a provider and father. Carissa tells me in awe, "He really didn't, he didn't know how much I cared."

Throughout a year of emotional excavation in couples' therapy, Dan revealed trauma in his past that he had never told anyone about. Now Carissa feels like she understands her husband better than ever and, actually, Dan feels like he understands himself better, too: Before the affair, he never quite believed that his wife loved him -- or understood his own tendency to feel unworthy of love.

The experience was personally transformational for Carissa, too: Now that her biggest fear has happened, and she survived, she has more confidence in her own strength. "I told him last night, 'I don’t need you, but I want you," she says. "I don't need anyone's validation anymore. I'm more aware and less angry at the world."

Of course, things aren't perfect. Dan still struggles with communicating his feelings, and the affair happened too recently to be entirely left in the past. "We're not 20 years in," says Carissa. "But the point we're at now? It's way better than it ever was before this."

Theirs is a happy antidote to the scores of relationships destroyed by infidelity -- it's one of the leading causes of divorce -- but the sad truth is that even when couples do manage to stay together, they often have trouble moving beyond the indiscretion. Either they go back to their pre-affair ways, simply happy to have survived it, or "their whole relationship fossilizes around this one event and there is no core anymore," says Perel. "And it's often a living hell."

But it isn't always, and it doesn't have to be.