Aisle Hogs '12: Changing of the guard 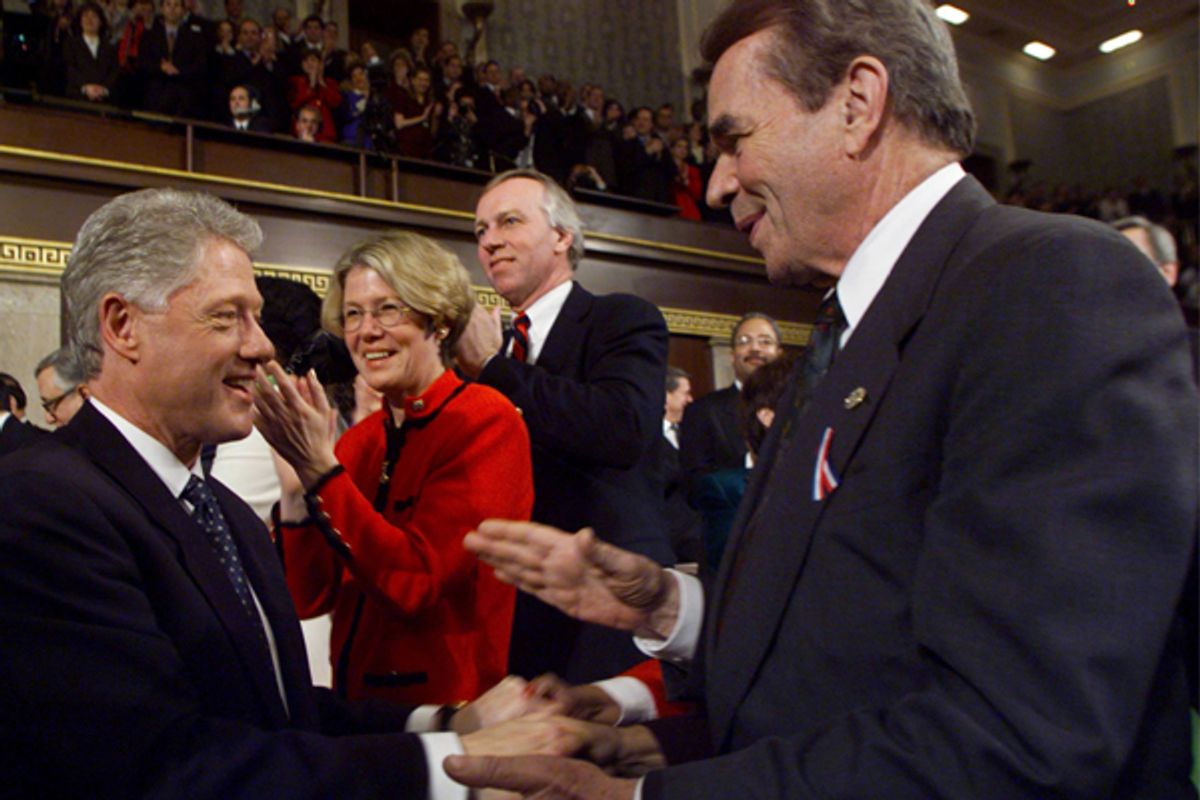 As soon as the sergeant-at-arms announces Barack Obama's arrival in the House chamber Tuesday night, you might want to pay extra-close attention to your television screen: It will probably be your last chance to catch the dean of the Aisle Hogs in action.

Rep. Dale Kildee, an 82-year-old Michigan Democrat who has represented the Flint area since 1976, is retiring from the House at the end of this year, making this the final State of the Union address he'll attend. There's a good chance you've never heard of him, but if you're a regular State of the Union viewer, then you've probably seen him -- or at least the back of his head. Every year, without fail, Kildee arrives early -- very, very early -- to claim a choice spot along the center aisle, putting himself in position to greet the president as he makes his way to the front of the chamber.

Kildee is hardly the only House member to take advantage of the first-come, first-served seating policy for presidential speeches, but as best we can tell he's been at it longer than any of his colleagues. In advance of last year's State of the Union, Salon came up with a name for this peculiar subspecies of congressperson: Aisle Hogs.

Our idea was to identify the members who are most dogged about grabbing a nationally televised second of the president's time on what is one of biggest nights of the year in politics. The process was thoroughly and admittedly unscientific. We looked back through C-Span's online archive of the 10 previous State of the Unions and were entirely at the mercy of the random camera shots that were used for each year's presidential entrance. Frequent cutaways to the first lady in the balcony or to the House speaker and vice president on the dais surely allowed an Aisle Hog or two to escape detection. Still, we felt confident that the five Aisle Hogs we settled on were all worthy of the title: Kildee, Sheila Jackson Lee of Texas, Ohio's Dennis Kucinich, New York's Eliot Engel and Jesse Jackson Jr. of Illinois.

Sure enough, when Barack Obama stepped onto the center aisle last January, he was almost immediately greeted by Kucinich -- and then Kildee, and then Engel and then Jackson Lee. So as we sat down to prepare our new Aisle Hog list for the 2012 State of the Union, their spots were secure. But we didn't spot Jesse Jackson Jr. last year, and while it's possible he was hiding along the aisle in plain sight, competition for Aisle Hog status is intense. So Jackson is off the new list and replace by (drumroll) ... Rep. Todd Platts of Pennsylvania.

A moderate Republican now serving his sixth term, Platts is an accomplished Aisle Hog, a fact that was brought to our attention by his local newspaper, the York Daily Record, after our 2011 list appeared. Platts actually wasn't on the aisle last year, but a review of the C-Span archive finds that he was there just about every year before then. He told the Record's Mike Argento last year that he would secure his spot by leaving a folder on an aisle seat early in the day. Platts recently announced that he won't seek reelection this year, and because of his past contributions to the form, we're happy to announce that he'll spend his final year in office as an official Salon Aisle Hog.

We also have our eye on a possible successor to Platts for next year: Republican Rep. Jean Schmidt of Ohio, who won her seat in a 2005 special election and who has been on the aisle for at least the past four State of the Unions. If she's there again on Tuesday night, her candidacy to replace Platts will be a virtual slam dunk.

And then there's the matter of Kildee, who will ride off into the sunset -- and to a near-certain first ballot induction into the Aisle Hog Hall of Fame -- at the end of the year. We asked his office if he had any parting words, but didn't hear back.

Kildee's exit means the Aisle Hogs will have a new dean in 2013, and it will probably be Engel, a 64-year-old New Yorker who came to the House in 1993. Barring a redistricting surprise in his home state, Engel, who is easily recognizable with his glasses and mustache (which Stephen Colbert once asked for the honor of combing), will have no trouble winning reelection this fall. When he appeared on last year's list, the New York Observer asked Engel for his reaction. “Now what’s happening is that people look for me,” he told the paper. “If I wasn’t there people would think I was sick or something. I want my constituents to know that I am well.”

And with that, we present the official Salon list of Congress's top five Aisle Hogs for 2012:

And here's the video we produced last year showing the Aisle Hog class of '11 in action: