Losing my husband, 140 characters at a time

After Kevin got cancer, all my rage and isolation went onto Twitter. Was I embarrassing myself, or rescuing myself? 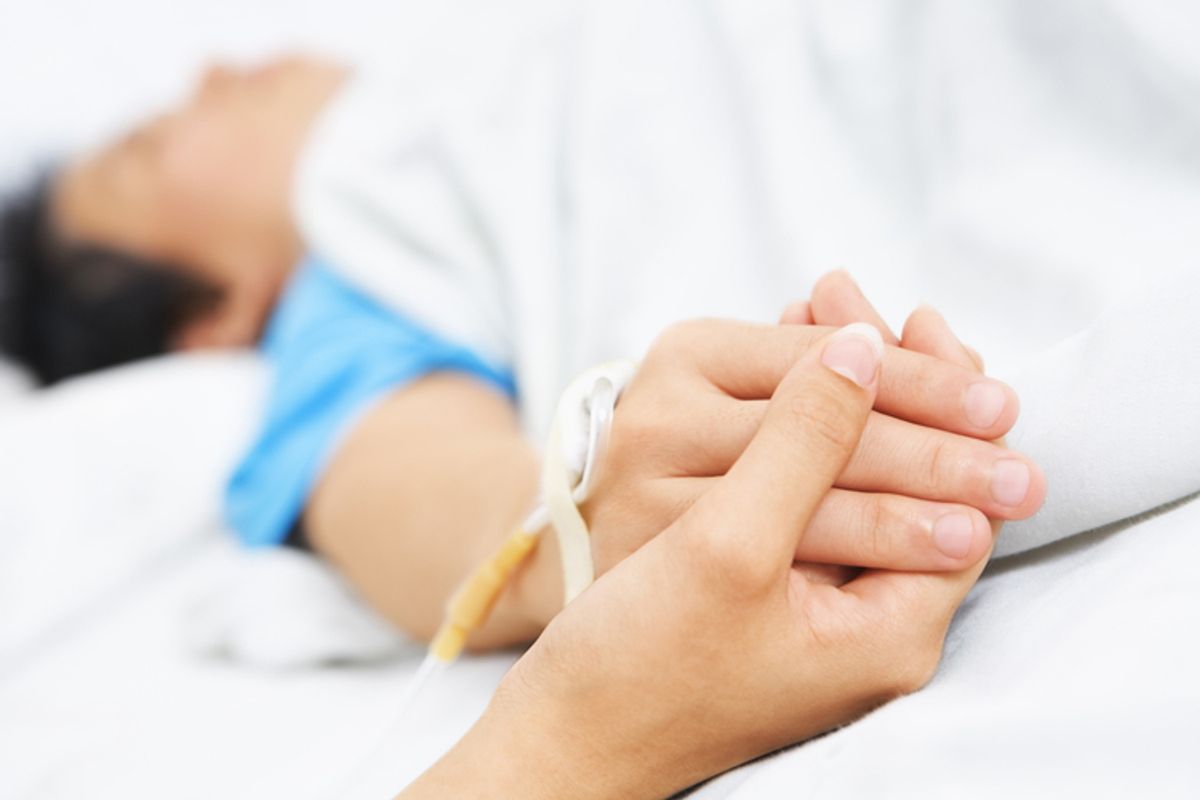 There was a time when I kept private journals, chronicling stories of time with my husband as if words could nail down a life and build strong, warm walls around us. That was before cancer. A kind you’ve hopefully never heard of, a sure, slow killer. Once we’d slogged through a couple of years there, I logged into Twitter and didn’t grapple with whether or why. Rather than holding us together now, I was a spectacle of flying apart. Twitter unleashed my inner ranting-woman-on-the-subway. You know the one — no inhibitions, breaking the code of civilized silence.

Obsessed with idea of being alone in a room w/old unwanted glassware & crockery, obliterating things till satiated, then someone else sweeps 7:25 AM Aug 3rd, 2009 from web

Consider the supermarket sagas. It was a place I spent a lot of time, both because I had young children to feed and because that’s where the pharmacy was. I would wait in line to pick up the narcotics and antiemetics, trying not to look at the varied pleasure-enhancing condoms. If my husband Kevin hadn’t “followed” me, I would have whipped out my phone to share some bitter thoughts about ribbed strawberry rubbers. But when I wheeled my cart away after begging for one or two pills to get him through a Sunday night, I did tweet:

HE, unlike me, would be a more diligent caretaker of his loved one. He basically said this. 4:41 PM Jun 14th, 2009 from mobile web

With a bit of distance I see my tweets as a record of how stress and trauma affected me. Most times in my life, I surely would have headed to the car at any early sign of impending tears. But I just didn’t care. I needed juice boxes and cat litter.

When Kevin and I met, we uprooted each other. He was all Berkeley and blue eyes with lightning wit, crazy intellect, consuming passions — books, politics, computers, for some reason, me, even if I had to kiss him the first time, sitting on a beach in winter as a cold wind came off the Pacific.

But we lived on opposite coasts. I was seven years older. It was improbable and romantic, but he quit a good job, packed his belongings — with a bit of the grad student’s soul still — into a two-door Honda Civic and drove to my house in northern Vermont. Kevin missed his friends and the rhythm of the city, but we got a Newfie and we cooked, and when his favorite Latino band came from L.A., I danced like never before. Through it all I made notes of the absurd and the beautiful. The idea of tweeting that time would have felt as substantial as blowing bubbles into the sky through a child’s plastic bubble wand.

Yet soon enough we had both the child and the requisite plastic wand. Kevin would blow hundreds of bubbles — the signal that bath time really was over — to the sound of riotous laughter as they popped over sweet soaped toddler skin. I can still hear the giggles.

We had eight years together, a son and a daughter before cancer turned vibrant life fragile. It was mostly Kevin who fought to make the time count, even when it was hard, but I would try. Between rants I told some lighter stories on Twitter.

When taking a hot bath to relieve an aching back, allowing a 5 yr-old in is approx. as therapeutic as tubbing with a dolphin. Cheerful tho. 5:16 PM Jun 20th, 2009 from web

What’s most apparent, however, looking back over my tweets, is the isolation and the anger. No one in the supermarket ever asked if I might need help, at the hospital it was worse.

Why do people say things like "you don't look too happy" to a woman standing alone outside surgery waiting room? 4:56 PM Aug 14th, 2009 from mobile web

I was almost always alone in hospitals, waiting for news from the operating room, waiting at Kevin’s side in the E.R. or by his hospital bed, often watching agonizing pain and struggle for breath. He had epithelioid sarcoma that originated in his pelvis then made its way through the lymph system to his lungs causing repeated collapse on both sides. The cancer itself was inoperable, but its side effects, along with radiation and various experimental chemotherapies, kept the specialists and the baby sitters busy.

Our social circles were small, our families far away. We were our own closest friends, content together, somewhat to our detriment I recognize now. Still, we were introverts not hermits. People are busy, I know. Medical drama is scary. But the ache and fatigue of relentless crisis gets etched in deep. I now view these dispatches as a defiant cry to be seen, to testify, bearing witness to suffering in 140 characters or less.

Kevin out. Surgeon-shoes splattered red-said it was hard but successful. Says he left him with two large tubes, minus couple cups of blood. 4:38 PM Aug 19th, 2009 from web

The surgeon had put in chest tubes to reinflate the lung, a procedure that gets trickier with repetition, we were told, as the penetrated skin grows thick and crinkly. Finally they let me into the post-anesthesia care unit to sit with him where the nurse drifts close as he slowly shakes off the bliss of unconsciousness.

Obvious I guess but hospitals r so gory. In PACU, neighbor dramatically swallowing blood. Then he laughs & wonders how the other guy (K) is. 6:37 PM Aug 19th, 2009 from web

Never did this become routine for me. I couldn’t read or surf the Net. I sat rigid with anxiety and sorrow, my eyes traveling from the beeping electronic monitors to the tubing that snaked from multiple parts of Kevin’s body to the strong arched cheekbones in his faraway face.

"The other guy" much more peaceful, tho im watching his blood gurgle disconcertingly thru tube. Thankful no twitter while I was giving birth 7:09 PM Aug 19th, 2009 from web

Dismissed to a room on the oncology floor, everything changes. Anesthesia is over. In less than two hours:

There were friends and even loving daycare teachers who did take stints with our little ones, 5 and 2 when it all started. But I suppose I was hoping for more of a reaction from my tweets, maybe a SWAT team, though someone said that following me was like watching a distant train wreck through binoculars. What we got was a flurry of casseroles and “How can we help?” queries at the beginning and at the end of a nearly four-year ordeal. One person asked if we’d like bagels. Probably someone showing up with an assortment of poppy, pumpernickel and plain would have felt nice. We didn’t need bagels; we needed people. I didn’t know how to answer, and bagels never came.

I guess "tweeting" is too gentle, like a birdsong rising into the skies. Is there a shouting social network? 9:57 AM Sep 11th, 2009 from mobile web

Panic in the E.R. came in two forms. There was whatever-was-happening-to-Kevin, and there’s me, frantically walking from his curtained cubby to somewhere I could get cell reception, piecing together, while the battery lasted, a complicated plan to get the kids from daycare and school (at times in different towns) and through the evening until I felt OK leaving him. In the order of things, that had to be first. But just once, so early they hadn’t yet diagnosed the problem as cancer, Kevin was having a scary surgery on a Sunday night when the waiting room was ghostly quiet. A friend called. She’d made a plan with the other buddy in our triad. They showed up with knitting and a bottle of wine that we drank surreptitiously from paper cups. I actually laughed through the fear.

Hard being invited to a party, location: casa bon vivancy. People SHOULD celebrate life. But in casa de cancer, you're living on an island. 9:51 PM Aug 6th, 2009 from web

I put us all in a shop window, and I didn’t make it easy to follow me.

Sometimes I ask myself if I regret the raw edge of this display. I read mocking reviews of “yet another cancer memoir,” and I wonder if the writer has walked those particular library stacks (that’s how we did it, pre-Amazon, back when I was 28 and my dad was dying of cancer) or paced those hospital floors.

Maybe I did get something I needed from Twitter. With no one’s permission, I gave myself a voice. Sometimes tender, furious or frantic, sometimes quivering with fear from bed in the middle of the night, listening to the too-labored breathing beside me. I needed to say these things and imagine some heart in the Twittersphere absorbing my crazed reality. My tweets may have merited the discreet, embarrassed looking away that we give the seemingly unreachable ranting woman on the train. I’m OK with that.

Since the first surreal days and weeks after Kevin died, my tweets have tapered to barely a trickle, though if I thought he would DM me I would tweet all day.

The first time his birthday came without him, I did post:

Kids and I just launched balloons into the night with glow sticks attached, green light disappearing into the sky. We love you Kevin. 9:22 PM Sep 28, 2010 from web

Lee Ann Cox is a writer whose work has appeared in the New York Times and other national publications. She is working on a memoir weaving her Tweets and excerpts from Card Blue, her late husband’s blog, into a tale of love and cancer, online and off. Follow her on Twitter @leeanncox.