The American middle class might not be making iPads and iPhones, but they sure are buying a lot of them 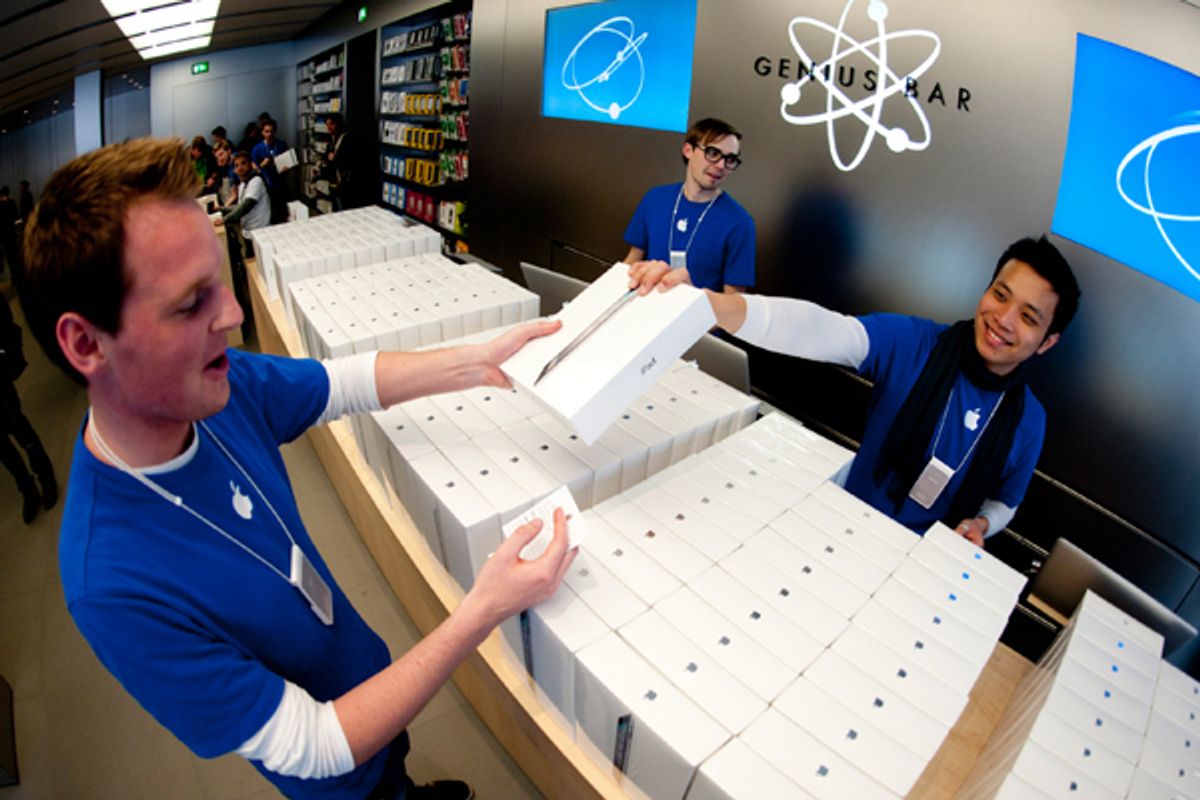 Apple's blowout quarter defies description. What can one do but gape at the news that the company had one of the very best quarters any company has ever had, primarily based on the sales of products -- iPhones and iPads -- that did not even exist five years ago? Not long ago, supposedly knowledgeable business insiders were declaring the iPhone dead in the water. But in 2011, Apple sold more iPhones than in 2007, 2008, 2009 and 2010, combined. Apple is also now sitting on nearly $100 billion in cash; the company has never been in better financial shape. (Disclaimer: I contributed.)

But what about the context? The earnings release came just two days after a terrific New York Times article, "How the U.S. Lost Out on iPhone Work," made it abundantly clear that what's good for Apple isn't necessarily good for the American worker. And it came just hours before a State of the Union speech at which Steve Jobs' wife, Laurene, was a guest in Michelle Obama's box, and in which the president called for the "insourcing" of American manufacturing. In short, the most successful, profitable company in the world right now is pursuing a manufacturing strategy that is the direct opposite of what the president is advocating.

So is just about everybody else, of course. You can pick your own villain to explain the shift of the global supply chain for consumer electronic manufacturing to China. Apple blames a lack of qualified workers in the U.S. Others point to China's manipulation of exchange rates. Paul Krugman underlines the self-perpetuating power of "agglomeration" -- once a modern supply chain becomes physically entrenched, it is extremely difficult to dislodge it or reinvent it elsewhere. The emergence of Foxconn -- a manufacturer capable of mobilizing hundreds of thousands of workers on the highest-tech assembly lines in the world -- is a product of a particular time and place. There is no Foxconn model for the U.S. and there never will be, again.

It's unfair to blame Apple as solely responsible for this state of events. American electronics companies started outsourcing the production of radio parts to Taiwan as far back as the 1950s. Since then, the shift of supply chains to East Asia has been an increasingly inexorable global phenomenon. Apple has simply taken advantage of the new realities of globalization with more efficiency, at bigger scale, and with far better products than anyone else. (Ironically, back when Apple was manufacturing its computers in the United States, the company was seen as irrelevant to the future of the computing business -- a has-been that made overpriced, underpowered devices for hipster elitists.)

And what about the product? There's a question that is getting lost in all the focus on manufacturing strategy and earnings results: Does society benefit from the iPhone and the iPad? It's not an exaggeration to say that the iPhone revolutionized the phone business; the iPad is similarly reshaping the computer business. We are moving into a the Golden Age of Wireless, a world where nearly everyone will have an Internet-connected computer in their pocket. Are we better off because of this? Are we doing things with these devices that compensate for the decline of manufacturing in the United States?

If we aren't, we should be. Because the U.S. cannot compete with China or India on terms of cheap labor or industrial scale. But there's no reason why we shouldn't be able to compete with our brains. The software that's inside the iPhone is one prominent example of that thesis. Using our smartphones to build a better world should be another.