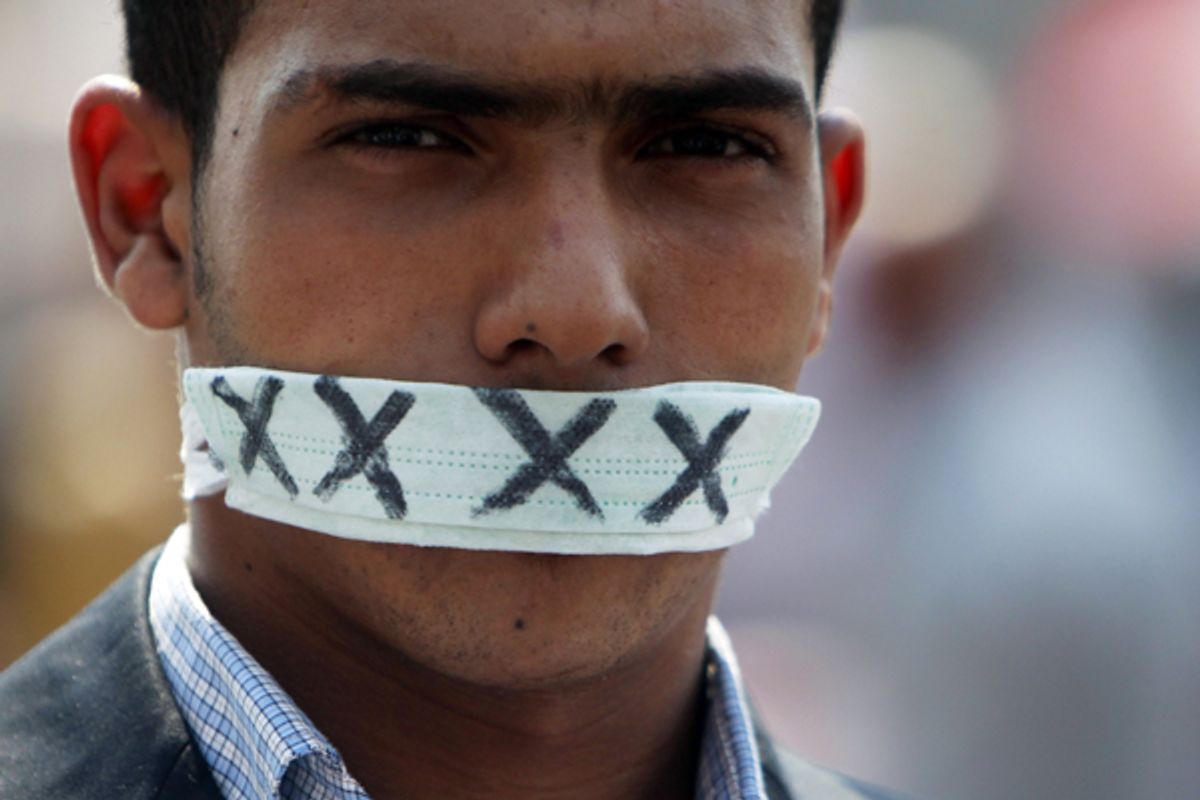 CAIRO – When massive crowds filled Egypt’s Tahrir Square one year ago chanting for the downfall of former President Hosni Mubarak, observers immediately tagged the movement “the revolution of the youth.” Organizers in their 20s and 30s had encouraged their compatriots to take to the streets and stand up for “bread, freedom, and social justice,” and they played a central role in leading the demonstrations up until the dictator’s demise.

As Egyptians plan to rally and march Wednesday to mark the one-year anniversary of the start of their revolution, nearly a dozen youths from across the political and socioeconomic spectrum told me Egypt had fundamentally changed, although not all agreed that transformation had been for the better. From increased political freedoms to fewer economic opportunities, the uprising has led to both expected and unexpected consequences for Egypt’s youth, who make up 25 percent of the country’s population.

Most young people I spoke with  said the revolution has generally been positive for them, but all agreed that improvements have been slow to occur, from stalled police reform to the military’s continued grip on power. But nearly all also agreed that it had altered the way Egyptians think. Young people here no longer see themselves as pawns of the system. They feel connected to the future of their country, even as they disagree significantly on where Egypt is today and where it should go.

Millions of Egyptians young and old cast ballots in parliamentary elections spanning the last couple of months, and observers praised the relatively free and fair vote. It was the first time many youths had directly participated in the political process, having grown up with rigged elections under Mubarak.

“I voted for a sheikh,” said Baha Saama, 21, a salesman at a souvenir shop who voted for the first time. “It was a beautiful thing.”

Many have not just voted but have become politically active over the past year.

Saleh Fekry, 25, has watched his life transform in a matter of months. Fekry had for years been politically apathetic, but the revolution whet his appetite for activism. He attended demonstrations, joined Twitter and started to frequent socialist and liberal circles. In November, police beat and briefly detained him during clashes with protesters.

“I was almost dead before the revolution," said Fekry, who studied to become a chemical engineer but who now works as a safety officer at a German oil and gas company.  "It’s like opening a door and light comes through.”

Muhammad Elgeba, 27, took his political engagement a bit further, running for parliament in his native Damietta, in the Nile Delta region. A member of the Muslim Brotherhood for 12 years, Elgeba broke with the Brotherhood in May feeling that youth reformists did not have a strong enough voice in the organization.

After helping form a new political party, the Egyptian Current, Elgeba decided to run for parliament on the list of the Brotherhood’s Freedom and Justice Party; while he did not become a part of the Brotherhood again, he says he still agrees with the movement’s ideology. But 10 days before the elections in November, he pulled out because of the new bloodshed he witnessed in Tahrir Square. If he had stayed in the race, he most likely would have become a member of parliament.

He remains happier than ever, though. He’s currently trying to form a youth movement that harnesses the strategy and way of thinking he witnessed during his days in Tahrir last year. He hopes the army relinquishes power soon, but he says his movement remains open to those with demands across the political spectrum.

“The youth, they are the factor that will help achieve this,” he said.

Many  told me they were largely disappointed with the pace of progress. Thousands of civilians languish in military prisons, substantive police reform has yet to materialize, and the ruling Supreme Council of the Armed Forces (SCAF) has repeatedly extended its rule despite promises to step down.

“I thought that the revolution would take care of all these things,” Fekry said. “I was very, very naive.”

Ramy Saad, a 28-year-old who sells Egyptian products online, said that when the Mubarak regime was still in power a plainclothes policeman once stopped him as he walked home from work near Cairo’s famed Khan al-Khalili market. The policeman led him to the local precinct and kept him there for two hours as he checked his identification card for seemingly no reason. Such intimidation occurred at random under Mubarak, when police and army officers ruled the streets, Saad said.

Now, the harassment is less, “but I’m worried because it’s the same people,” he said. Still, Saad believes the revolution was “definitely” positive for Egypt. He happily participated in parliamentary elections — he voted for the Muslim Brotherhood’s Freedom and Justice Party — but has become disenchanted by political bickering.

In the months since the initial uprising last January and February, young liberals have become increasingly exasperated with and surprised at their dwindling support among the general population. Islamists won more than two-thirds of seats in the parliamentary elections, and the military has increasingly portrayed the protesters in a negative light.

The ruling military council has continued many of the practices of the old regime, earning the ire of many young people.

“We had confidence in the military council,” said Akram Samy, 23, a diplomatic reporter for the independent newspaper Youm7. He said that while the SCAF has moved forward with two main demands of the protesters — holding elections and putting Mubarak on trial — Egyptians have yet to achieve the dignity and justice they long for. Young Egyptians sometimes compare their country to Tunisia, where post-revolutionary change has moved much more rapidly.

Meanwhile, the press in Egypt has not become any freer, Samy said. While new media outlets have proliferated, the same red lines still exist, albeit slightly shifted: Instead of limits on directly criticizing Mubarak, journalists now largely stop short of directly attacking the military council.

In the end, Samy is glad the revolution took place. "I think Egypt has improved and is better,” he said.

Many young Egyptians say they did not expect the political instability in their country to cause Egypt’s economy to crash, with foreign investment and tourism drying up, wages dropping and unemployment on the rise.

That’s particularly true for young people working at the famous Khan el-Khalili market, hawking everything from silver and gold to plastic pyramids and papyrus.

Saama, the souvenir salesman who voted for the first time, stood in his shop on Monday watching one or two tourists trickle by every couple of minutes. Before the revolution, he sold upward of $35 of products a day. Now, he’s lucky if one or two people spend a few dollars at his stall, a tough reality for the 21-year-old from the working-class neighborhood of Gamalia.

Large hookah pipes and colorful trinkets adorned Ahmed Adel’s shop just up the street. Adel, 32, went to nursing school but became a full-time souvenir salesman before the revolution to support his young children. Now, fewer foreign visitors have led him to work as a nurse on the side to make ends meet.

“I wish it had never happened,” he said of the revolution.

Hostel owner Dina Abouelsoud, 36, disagreed. Normally, she’s overbooked this time of year; now, her hostel is at 10 or 20 percent capacity. But Dina is happy the revolution occurred. Like others, the upheaval lifted her from political apathy and thrust her to the forefront of political organizing; she focuses on making sure young women are represented in the liberal activists’ decision-making process.

“The main thing is just to empower women’s political life and life” in general, she said. She abhors recent political developments and believes the Egyptian people have been tricked into supporting an illegitimate parliament, which held its first session on Monday.

Coptic Christians are perhaps one of the most visible constituencies who have suffered after Mubarak’s downfall. While many were glad to see Mubarak go, some young Christians have become disenchanted by prominent incidents of sectarian strife and the Islamists’ overwhelming electoral victory.

“I’m not a political person,” said Rasha Fayez, a 25-year-old Coptic Christian from the working-class neighborhood of Shubra. But she wishes Mubarak was still in power. “He was Muslim, but he was a political man” who maintained strong foreign policy and kept Egypt peaceful domestically.

Now, Fayez worries that an Islamist will become president and force Islamic law on all Egyptians, maybe even making all women cover their hair with a headscarf.

George Kalliny, a 23-year-old Coptic Christian, thinks most Christians agree with Fayez, although he believes that over time governing the country will force the Muslim Brotherhood and the ultraconservative Salafists to moderate their views. In the end, he said, liberals like himself will gain more power.

“Until we find a generation that is not scared to fight for their rights,” the revolution will not realize its goals, said Shayma Kamel, 31, an artist. Sitting among her mixed-media collages at Cairo’s Mashrabia Gallery only minutes from Tahrir Square, Kamel said she was glad the revolution occurred but insisted the fight against corruption and oppression still had decades to go. Before the revolution, Kamel’s art dealt primarily with women’s issues, but her current exhibition derides the relationships politicians have with their people.

“We should keep pushing,” she said.

Saad, the online merchant, said, “Right now, the revolution is not complete. We’re only at 10 percent … or maybe less.”

Fekry, the liberal activist, said he has learned from months of political back-and-forth that revolutions take time. “You always have to take a step back to jump ahead.”