There was plenty of mush in his State of the Union, but also an unmistakably combative and populist tone 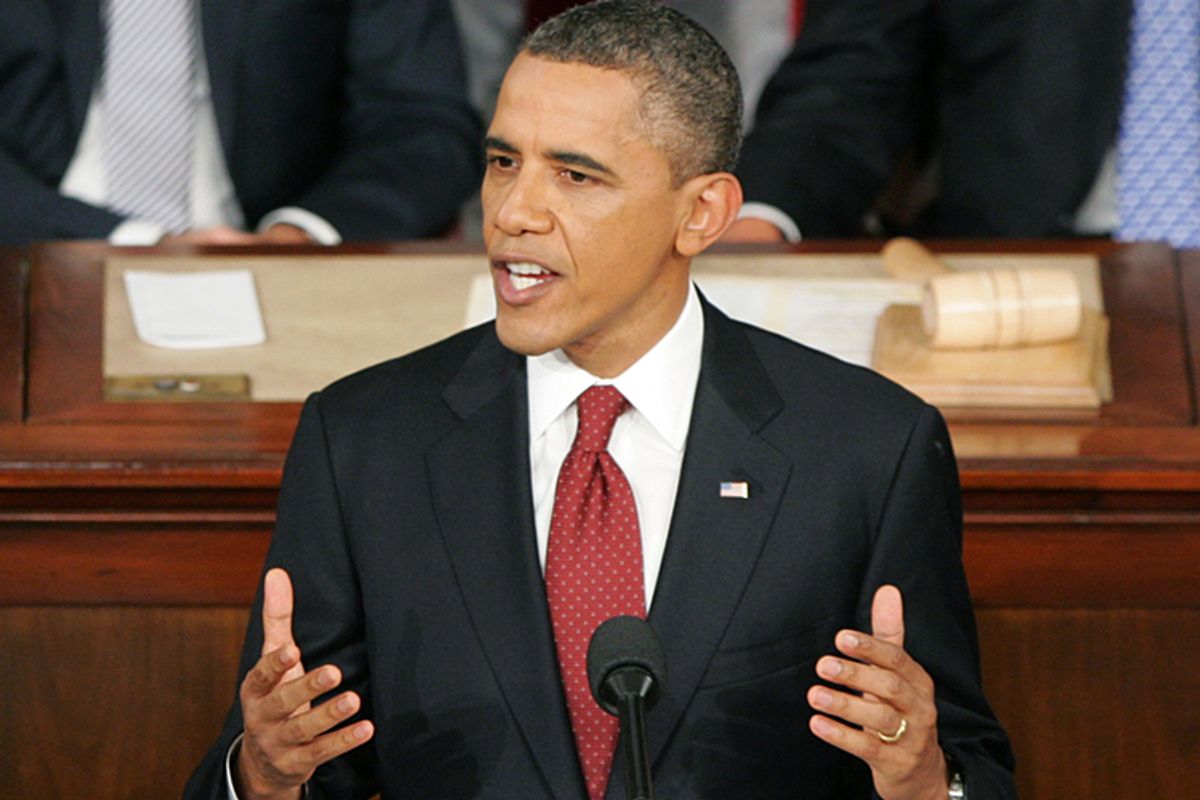 Before Tuesday night, it had been 16 years since a Democratic president gave a State of the Union address in his reelection year.

And in some ways, the speech that Barack Obama delivered was very similar to the one that Bill Clinton offered back in 1996. But if you put aside all of the platitudes, mushy rhetoric and feel-good proposals, the heart of Obama’s remarks demonstrated that he’s intent on pursuing a far more combative and populist path to a second term than the one Clinton followed.

It was during his Jan. 23, 1996, State of the Union that Clinton uttered the signature line of his presidency. “The era of big government is over,” he told a joint session of Congress that night. The line captured the essence of an election year message that largely conceded the broad themes of the Reagan revolution while offering the incumbent as a more compassionate implementer of them than his Republican opponents.

Obama’s address included no shortage of appeals to unity, bipartisanship and overriding national purpose, and he articulated plenty of vague, popular-sounding policy goals, much as Clinton did during his ’96 campaign. But his central message stressed a sharp and basic philosophical contrast with his partisan opponents – one he clearly plans to make the centerpiece of his reelection effort.

Specifically, the fight Obama wants to have is over income inequality and tax fairness, with the aim of exposing today’s Republican Party as the chief protector of a super-affluent elite that has grown even wealthier as the rest of America has struggled. For decades, Republicans have scored points accusing Democrats of “class warfare,” but the White House’s bet is that in post-meltdown America the “99 percent” message has resonance with blue-collar voters who have in the past embraced the GOP’s individualist pitch.

In his speech, Obama offered a forceful and comprehensive rebuttal to the class warfare charge, one we’ll surely be hearing again and again these next nine months. He made a case for letting the Bush tax cuts for the wealthy expire and for imposing the “Buffett rule” – doing away with tax rules that allow millionaires who make their money from investments to pay an income tax rate that’s lower than the one paid by people who earn a fraction of their income. He made the case in moral terms, as a way to affirm a social contract that’s been violated by the policy-making of the past three decades:

Now, you can call this class warfare all you want.  But asking a billionaire to pay at least as much as his secretary in taxes?  Most Americans would call that common sense.

When Americans talk about folks like me paying my fair share of taxes, it’s not because they envy the rich.  It’s because they understand that when I get tax breaks I don’t need and the country can’t afford, it either adds to the deficit, or somebody else has to make up the difference – like a senior on a fixed income; or a student trying to get through school; or a family trying to make ends meet.  That’s not right.  Americans know it’s not right.  They know that this generation’s success is only possible because past generations felt a responsibility to each other, and to their country’s future, and they know our way of life will only endure if we feel that same sense of shared responsibility.  That’s how we’ll reduce our deficit.  That’s an America built to last.

Obviously, this is a message that could be particularly effective if Obama’s opponent is Mitt Romney, the private equity veteran whose tax records indicate that he paid a 14 percent effective federal rate thanks to the current rules on investment income. But it’s one Obama will stress no matter who his opponent is. After all, Newt Gingrich, Romney’s chief rival for the GOP nomination, is actually proposing that the capital gains tax be eliminated altogether – a move that would drop the effective tax rate of Romney and others like him close to zero.

“We can either settle for a country where a shrinking number of people do really well, while a growing number of Americans barely get by,” Obama said early in his speech, “or we can restore an economy where everyone gets a fair shot, everyone does their fair share, and everyone plays by the same set of rules.”

He’s embracing the idea that there is fundamental philosophical divide between the parties on the most important economic questions facing the country. That’s a very different message than the one he delivered in his State of the Union last year, when he was coming off a midterm election drubbing and he believed that his best bet for reelection was in following the Clinton ’96 model.

But a massively frustrating spring and summer of 2011, which culminated in the GOP’s rejection of his debt ceiling “grand bargain” and a public relations disaster, finally convinced the White House that meaningful compromise with Tea Party-era Republicans simply isn’t possible – and that pretending otherwise was politically suicidal. Since then, Obama has made it his mission to call out Republicans for their obstructionism and to shine a light on who is protected by their obstructionism. His State of the Union on Tuesday night laid the groundwork for a reelection campaign that will be defined by that theme.