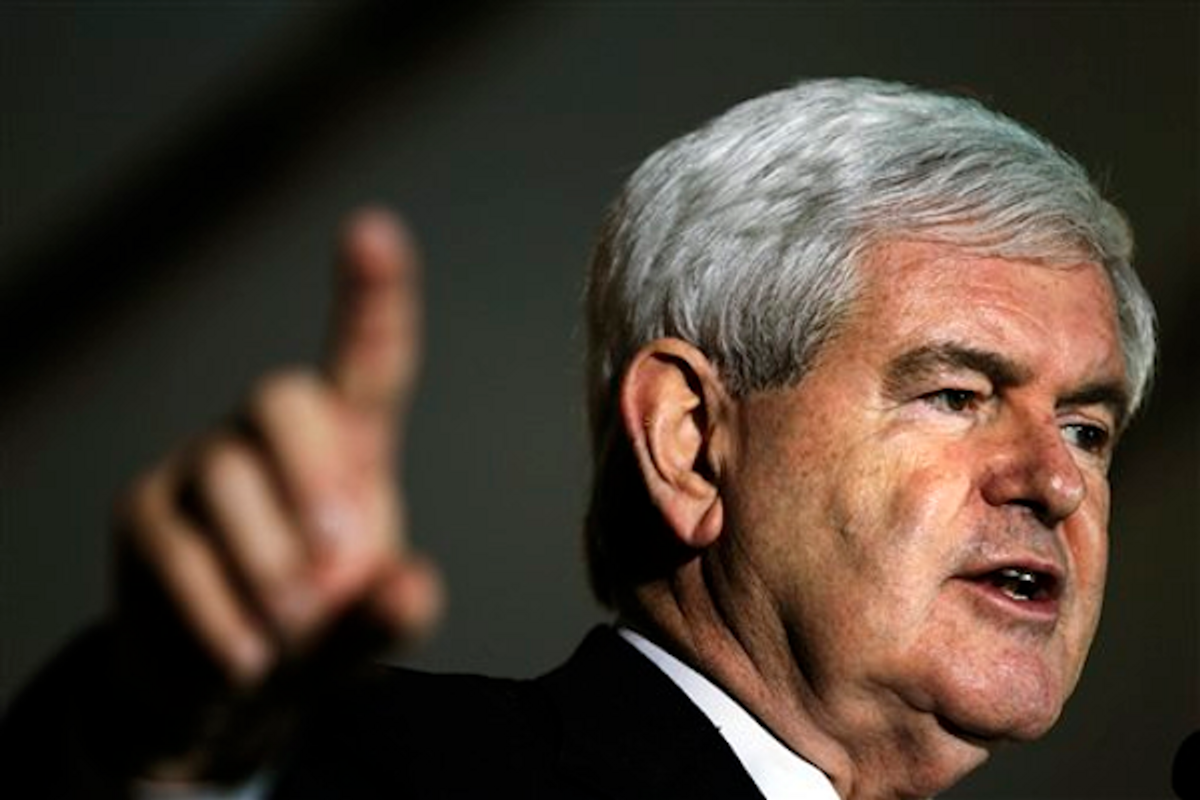 Look, nobody’s third wife is going to be first lady. In the privacy of the voting booth, American women won’t stand for it. Regardless of how flawlessly the bejeweled Callista enacts the role of pious matron, she remains the embodiment of the Trophy Wife — younger, more adoring, unencumbered by children, a climber on the make. In effect, a successful Monica Lewinsky, although unlike Bill Clinton’s paramour, Callista was no kid.

Even Ann Coulter knows that. Having placed an early bet on Mitt Romney, the GOP’s vestal virgin pronounced herself shocked to hear South Carolina Republicans accepting “Democratic” arguments excusing Newt Gingrich’s serial adultery. On “Fox & Friends,” Coulter said, “I promise you, if Mitt Romney or Rick Santorum had cheated on two wives — that we know, the ‘open marriage’ thing is the only thing he contests, we know he cheated on two wives — I wouldn’t support Mitt Romney.”

Ah, but there were deeper passions at play in South Carolina. So let’s switch metaphors. Judging by the whooping and hollering of the CNN debate audience, the GOP’s neo-Confederate wing wishes for nothing less than an electoral replay of Pickett’s charge — the doomed infantry attack at Gettysburg most historians believe marked the beginning of the end of the Civil War. A sizable proportion of South Carolinians have yearned for a rematch ever since.

And they don’t think they’re going to get it with Mitt Romney, a Yankee’s Yankee who goes around babbling passionless truisms like this gem unearthed from his standard stump speech by the National Review’s Mark Steyn:

Do what? (That’s Southern for what the hell?)

Romney’s not only a dead ringer for Sesame Street’s puppet anchorman Guy Smiley, but could probably have switched places with CNN’s John King without missing a beat. To Gingrich supporters, Steyn observes, he comes across as “a synthetic, stage-managed hollow man of no fixed beliefs.”

There’s little sign of anger in his personality. But then why would there be? The son of a failed candidate, Romney gives every indication of wanting to be president simply because, well, he deserves to be president.

To a GOP base bombarded with Manichaean propaganda depicting President Obama as a veritable antichrist, that may not be good enough. They don’t simply want to prevent Obama’s reelection. They want to see him obliterated, humiliated and shamed. Watching Gingrich verbally pummel Fox’s Juan Williams and CNN’s King — antagonists who, by definition, can’t fight back — sharpened their appetite to see him take on Obama.

Republican debate audiences that have boisterously cheered Texas’ use of the death penalty, booed a gay soldier serving in Iraq, hooted at Fox News’ Williams for asking about racially stereotyping food stamp recipients, and even applauded torture, appear to find Gingrich’s surliness and ill-concealed personal resentments a perfect match for their own. Newt’s ability to channel their anger resembles Richard M. Nixon’s, albeit without Nixon’s self-discipline.

Fox News’ Steve Doocy spoke for them all, predicting that, if nominated, “Newt is going to take off the head of the president” (lovely metaphor) in debates. Many actually believe that Newt’s a brilliant extemporaneous thinker like Rush Limbaugh, while Obama’s an affirmative action hire who’s helpless without his teleprompter.

Meanwhile, back in reality, the saner kinds of Republicans are running scared. The Washington Post’s George Will empathizes with GOP candidates who could find themselves “running next autumn with Gingrich — whose current approval rating nationally in a Jan. 12-14 Fox News and Opinion Dynamics poll was 27 percent favorable, 56 percent unfavorable — atop the ticket.”

The very decorous Ms. Coulter laments that “South Carolinians would rather have the emotional satisfaction of a snotty remark toward the president than to beat Obama in the fall.” The scholarly author of “Demonic: How the Liberal Mob Is Endangering America” explains that the GOP nominee can’t win over independent voters simply by calling the president bad names. Now she tells us.

Conservative talk show host Michael Medved cautions that “for swing voters and independents, Gingrich’s reference to ‘Obama’s secular-socialist machine’… may sound extreme and irresponsible; few of them would agree with his conclusion that the current president represents a greater threat to the nation than Nazism or Soviet communism.” He adds that “the current craving for an intense and impassioned candidate” would likely backfire in the general election.

You know things are crazy when Ann Coulter starts making sense. I think even the perception that Newt could get under Obama’s skin is badly mistaken. In a presidential debate, the guy sweating and glowering is the guy losing. The sorehead right, however, won’t believe it until they’ve lost the visceral confrontation they so crave.

In that sense, a Gingrich nomination could end up being very good for the country.