Agnieszka Holland, director of the Holocaust drama "In Darkness," says you can't ever expect people to do right 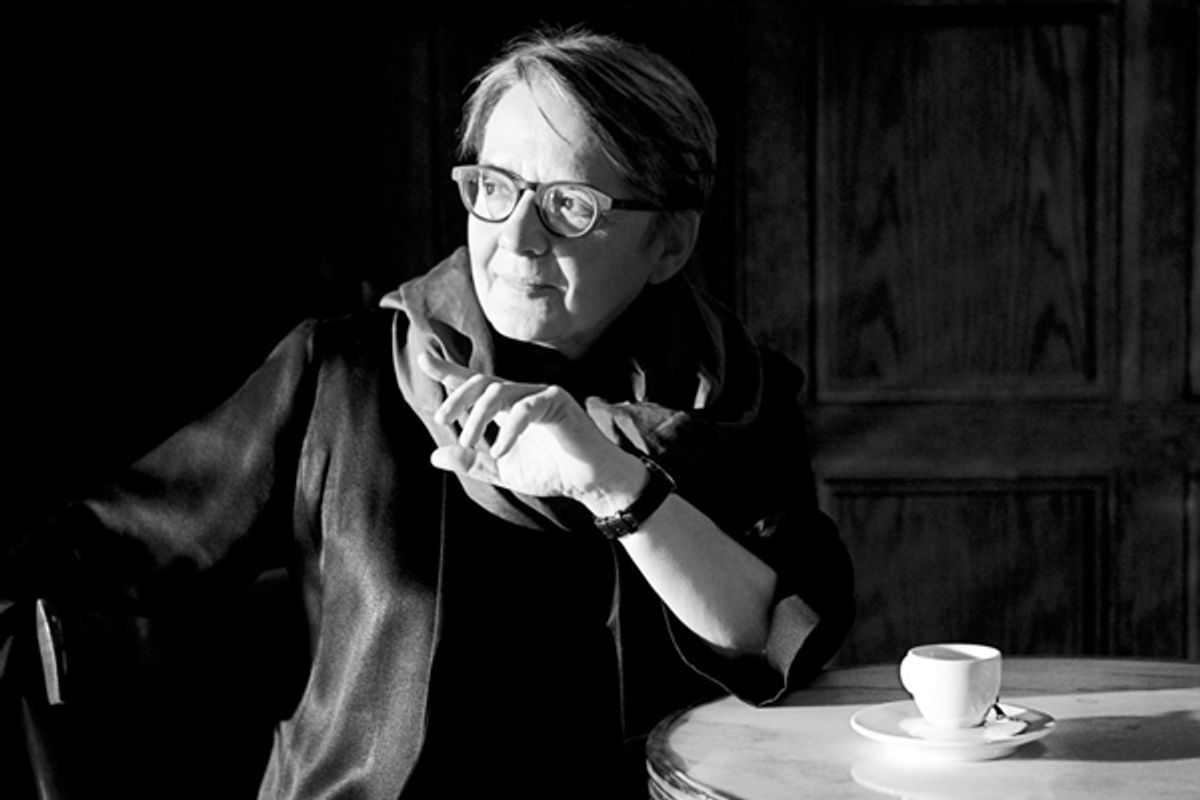 Agnieszka Holland’s "In Darkness," an Oscar nominee for best foreign film, tells the story of a Polish thief and workingman who protects a group of Jews seeking refuge in the sewers of Lwow, Poland, during the Nazi occupation. Based on a true story that’s been told in two nonfiction books, the story examines the conscience of Leopold Socha (played by Robert Wickiewicz), a casual anti-Semite motivated by a mixture of greed, fear, anger and altruism.

Holland -- whose remarkably diverse career includes two earlier Holocaust themes ("Europa, Europa," "Bitter Harvest"), a Henry James novel ("Washington Square"), "The Secret Garden" and three episodes of David Simon’s "The Wire" --  first turned down the film because its principal backers demanded that the actors speak English. She wanted the languages to reproduce the polyglot Babel of Lwow, then a Polish city and now a center of Ukrainian nationalism.

We spoke with Holland last week, ahead of the Oscar nominations, in Washington, D.C., where "In Darkness" was screened at the U.S. Holocaust Museum.

Many of us approach the Holocaust with a mixture of horror and wonder, it’s so inexplicable. Do you keep returning to it in film because it’s unsolvable, or because you’re trying to understand something about it?

About the Holocaust, no. About human nature, yes. In these borderline experiences of humanity you see suddenly how fragile and how strong and how miserable human nature is. Sometimes you have little sparks of greatness -- but you can’t really count on them.

Your father was a Jew in the Warsaw ghetto, your mother a gentile who helped Jews as a girl. It’s a personal story for you, but you weren’t there. Do you view the Holocaust in a different way than, say, an American of your age?

I have quite a particular connection to the Holocaust; maybe it’s a mystical thing. When I hear the stories of the Holocaust, it very rarely seems new to me — it’s as if I dreamed it already. With this script, it was as if I had dreamed it already before I read about it. [Polish filmmaker Andrzej] Wajda, my friend and mentor, lived through the Holocaust as a Polish partisan. His view of the war experience is very different from the Jewish perspective. And some Jews have been very unhappy with the vision in his wartime films ("Kanal," "Korczak," "Samson"). His films were accurate but they were from the perspective of young Polish underground fighters.

My perspective is closer to the perspective of the Jewish survivor in some way. When I show survivors my movies or talk about their experiences, the communication is very easy. They accept my vision and I understand very well what they went through. My mother was Polish, helping Jews as a young girl. I have those two things in myself, which sometimes is very uncomfortable but at the same time gives me a more objective view. And I don’t feel any guilt.

Why did you insist that "In Darkness" be in the original languages? Does the cacophony of different languages --  where the Jews are divided among those speaking Yiddish and German, the Poles speak dialect – telling you something about a vanished world?

Right. Especially I wanted the use of Yiddish and Balak (the working-class dialect of the city of Lwow, now Lviv) to reflect that diversity. Some of the characters – Socha and his partner Szczepek, and Socha’s wife and daughter – speak Lwow dialect.

What’s different about that dialect, to a Polish ear? And how hard is it to find people who still use it?

It has many differences from the classical Polish in terms of the accent and vocabulary. It was spoken by the lower classes, sort of what Cockney, or northern dialect is to English; it became the language of comedies and songs and cabaret before the war. There was a famous 1930s Lwow radio program by two guys, Szczepko and Tonko – a Jew and a Pole -- they also did several movies.

Balak has different connotations to a Polish speaker. It tells you something about class, about time and place. It has some Ukrainian in it, some Czech and German and Hungarian and Yiddish. This was Galicia, once part of the Austro-Hungarian empire, and the influences were very mixed. The language only exists today in these recordings and movies. No one speaks it anymore; it died with the generation that grew up in the war. After World War II, the Polish people left Lwow [Stalin expelled them] and it became part of the Soviet Ukraine. Today Polish people don’t understand Balak, even half of it. I had to subtitle the dialogues in Polish.

We found one person who was a really good coach, a specialist in this dialect. He made recordings for the actors, and they watched the old movies. They had to do their homework, and with the Yiddish as well. Many of the Jewish characters speak German -- many Lwow Jews of this generation attended university in Lwow or Vienna or Berlin, and the upper class spoke correct literary German. And the mixture of Ukrainian and Polish was a kind of lingua franca in Lwow.

It was a pleasure to try to re-create this environment. For Americans it doesn’t make so much difference, but for Polish audiences this has been one of the great attractions of the film. People say it’s fantastic to hear all of those languages again. The richness of these languages that reminds them of how it was.

Does the city of Lwow mean anything special to you?

I come from central Poland, from Warsaw. But Lwow for many people in Poland is like the lost Arcadia. Their attachment to the city was very strong. Even in the second and third generation if someone is from Lwow he feels he’s from this special place that was taken away from us. It has this nostalgic and mythological quality. When I read the story I thought it would be great to try to create a taste of Lwow, even without showing the city -- to show its spirit. We wanted to film in Lviv, but it was more expensive than Poland, and besides we had to spend our money in the places that gave us subsidies. I planned to go there for two or three days at the end, but we ran out of money.

There’s a scene where Socha, the hero, says to Mr. Chiger, “Here you are bargaining for your life. Always a Jew.” Someone might call that anti-Semitic. But Jews in places like Lwow were traders, hagglers, so in a sense, it’s a completely natural statement.

Stereotypes are always based on realities. Polish peasants learned the expression, “Give a Jew your finger, he’ll take your entire hand.” If you ask the same peasant if he hated Jews, he’d say, "No, not at all." But of course it’s very dangerous, because in situations like this it had consequences. The Germans used those stereotypes to reinforce the feeling that Jews were not human. Stereotypes are dangerous. But that is how they existed.

The Jews in the film regard the Poles as a constant danger. And they despise Socha, the “dumb Polak.” The mistrust was reciprocal. It wasn’t something that would have spread to genocide. Of course there were pogroms against Polish Jews before the wars. But it’s same thing in the former Yugoslavia; people live together for centuries, nothing major is wrong. Suddenly one little match and everything is on fire.

At the end, Socha shouts, “Look, my Jews!” This is embarrassing and yet he’s right, in a sense.

It’s a little pathetic but poignant. The audience is laughing and at the same time crying.

The film has done very well in Poland. What do Poles of our generation or younger take from a film like this compared to Americans?

They’ve been surprisingly responsive. They take its human dimension very strongly. I think the depictions are easier to accept than to show all the Jews as angelic and the Poles as petty criminals and murderers, or as heroes, any kind of stereotypical presentation. We tried to make the film as subjective as possible. And young people love it for this reason. Audiences feel they can identify with it, with the people on both sides.

Are there any characters in "The Wire" who remind you of Polish characters you’ve worked with?

No, but I love all the characters. Bunk and McNulty, Omar of course. .. I liked Snoop, this girl. She was real – a real criminal who’d spent years in prison. It was some kind of redemption for her to be in the series. But she recently was arrested again.

I’m amazed you can go between these two worlds. Did you feel like a stranger when you were filming "The Wire"?

No, not after a while. The world of fiction is my natural world. It can be Victorian England, it can be Baltimore of today , it can be the Second World War. Of course, some settings are closer to my interest and sensitivities, and sometimes the real, you know, stories are more exciting than fantasy. I never wanted to do fantasy or science fiction. I went to New Orleans and shot "‘Treme" and after a few days I felt so close to that story. It’s very rewarding; it makes your life richer.