Obama's adroit handling of threats from Iran raises the question: What would Newt have done? 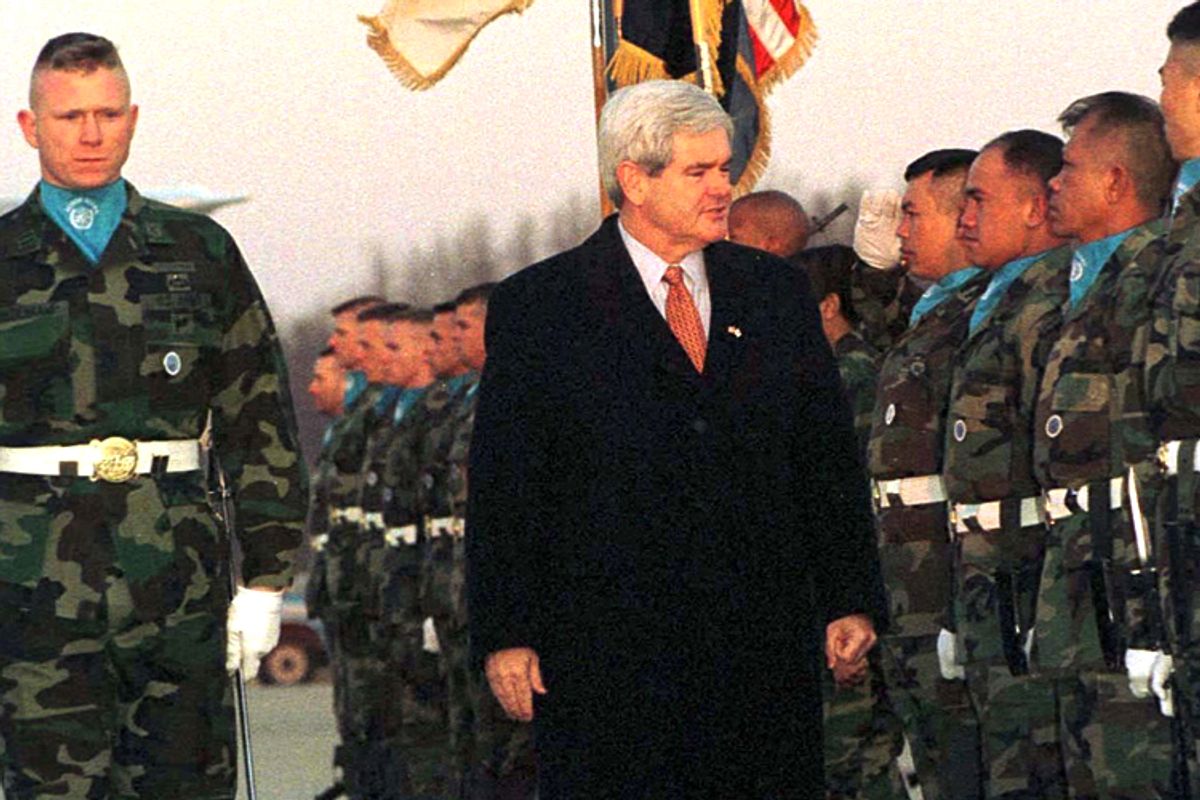 Presidential campaigns offer an opportunity to compare what the candidates say on the trail with what the job requires in the White House. With regard to foreign policy in 2012, the issue of Iran offers a case in point. In recent weeks, the United States and the Islamic Republic have once again clashed publicly while still seeking to negotiate privately over Iran's nuclear program. The responses of President Obama and of the candidates who hope to succeed him illuminated the fundamental foreign policy choice facing voters who will choose a commander in chief next November.

On Sunday, the aircraft carrier USS Abraham Lincoln moved through the Strait of Hormuz, the world’s most heavily trafficked oil export route, on schedule and without incident. While the carrier had transited the strait numerous times before, it did so on Sunday amid a series of threats from members of the Iranian government in response to a tightening of international sanctions against Iran’s oil exports.

"If Iran oil is banned, not a single drop of oil will pass through Hormuz Strait," Iran's First Vice President Mohammad Reza Rahimi said on Dec. 27.  Four days later, President Obama signed the latest, and toughest, congressional sanctions yet, mandating penalties on companies that do business with Iran’s central bank.

On Jan. 3, after the aircraft carrier USS John C. Stennis had departed the gulf, the Iranian regime raised the stakes. "Iran will not repeat its warning,” said Iranian Army commander Ataollah Salehi, “I recommend and emphasize to the American carrier not to return to the Persian Gulf ... we are not in the habit of warning more than once.”

Whether or not the Iranians would actually follow through on the threat to close the Strait of Hormuz (an act that would probably do more than any other to unite the world against it) the dire implications of such an action make it worth taking seriously. In 2011, almost 17 million barrels of oil a day passed through the strait, nearly 20 percent of the global oil trade. A disruption of traffic through the strait, even a temporary one, could have a considerable, and immediate, impact on the global economy.

“No one in this government seeks confrontation over the Strait of Hormuz,” Pentagon spokesman George Little said in response to the Iranian saber-rattling. “It’s important to lower the temperature.”

Appearing on CBS’ "Face the Nation" the following Sunday, Secretary of Defense Leon Panetta said that the U.S. would “not tolerate” the blocking of the strait, calling it a “red line for us” and stating that “we will respond” if the Iranians attempted to block it.

Appearing alongside Secretary Panetta, chairman of the Joint Chiefs of Staff Gen. Martin Dempsey added that the U.S. would be able to turn back any attempt to deny access to the Strait. “They've invested in capabilities that could, in fact, for a period of time block the Straits of Hormuz. We've invested in capabilities to ensure that if that happens, we can defeat that,” he said. “We've described that as an intolerable act. And it's not just intolerable for us, it's intolerable to the world. But we would take action and reopen the Straits.”

President Obama, of course, went ahead and signed the sanctions anyway.  And when the USS Abraham Lincoln carrier group, accompanied by a British Royal Navy frigate and a French vessel, returned to the Persian Gulf, the Iranian response was … muted.

"U.S. warships and military forces have been in the Persian Gulf and the Middle East region for many years,” Revolutionary Guard Deputy Commander Hossein Salami told the official IRNA news agency, “and their decision in relation to the dispatch of a new warship is not a new issue and it should be interpreted as part of their permanent presence.”

In response to the new sanctions, which the EU has since followed up on, Iranian government also sounded conciliatory notes. “Consensus can only be reached through serious negotiations based on a cooperative approach and not via the wrong path of sanctions,” an Iranian Foreign Ministry spokesman told the official Islamic Republic News Agency.

The Obama administration was wise not to trumpet the Iranians’ humiliating climb down, but it was certainly not lost on either the international audience or those watching inside Iran. The sanctions had gone forward, the ships had traversed the strait, yet Iran leveled no consequences.  Tensions are, for the moment, down from extremely high to their usual level of high, thanks to a steady, firm response from the Obama administration.

“It definitely could have gotten out of control, because the new set of sanctions were interpreted by Iran as a major escalation, close to an act of war,” says Vali Nasr, author of several books about Iran who previously served in the Obama administration with the late Richard Holbrooke. “The Iranians decided that the best way of reacting was through toughness, trying to find ways of deterring the U.S., so they made provocative statements about closing the strait, and threats against our aircraft carrier.”

The assassination of Iranian nuclear scientist Mostafa Ahmadi-Roshan on Jan. 11 also heightened tensions, but Nasr stresses the U.S. reaction. “The U.S. made clear that as tough as the new sanctions were, that was all the U.S. was undertaking. The U.S. disowned the killing of the scientist, but also made warnings about the closing of the strait.” Importantly, Nasr notes, the U.S. “also encourage the Iranians to come to talk” over its nuclear program, demonstrating once again that the U.S. is not the recalcitrant party.

Yet, to watch the Republican debate on Monday night, you’d have thought that President Obama had been the one to climb down, and that America had been humiliated. Mitt Romney continued his pattern of castigating Obama while strenuously articulating the exact same policy. "We want to show Iran" that closing the Strait, or any similar action, Romney said, "will be considered an act of war, an act of terror and America is going to keep the sea lanes open."

Newt Gingrich responded, “I would say that the most dangerous thing -- which, by the way, Barack Obama just did -- the Iranians are practicing closing the Strait of Hormuz, actively taunting us, so he cancels a military exercise with the Israelis so as not to be provocative?

“Dictatorships respond to strength, they don’t respond to weakness,” Gingrich continued, “and I think there’s very grave danger that the Iranians think this president is so weak that they could close the Strait of Hormuz and not suffer substantial consequences.”

While Gingrich’s claim about the U.S.-Israeli exercise was false (“On the record, officials have said it was a joint decision,” wrote Ron Kampeas of the Jewish Telegraphic Agency, “and I have been told point blank by Israeli and U.S. officials, on background, that it was initiated by Ehud Barak, the defense minister"), it’s useful to imagine how a President Newt Gingrich might have reacted to a similar situation – would he have similarly de-escalated, or would his version of “showing strength” have led to a serious crisis? It’s quite possible, given that Gingrich’s view of “strength” apparently involves asserting America’s prerogatives in the most aggressive and obnoxious way possible.

And if you’re inclined to chalk up his bellicosity to campaigning, and think that Gingrich would be steadier once in office and surrounded by more sober-minded advisors, consider that he has already announced that he would ask John Bolton to be his secretary of state. An advocate of bombing Iran from way back, Bolton recently dismissed the assassinations of Iranian scientists and the new sanctions -- the most severe that Iran has ever faced -- as “half-measures.”

As to what impact crazy statements from Republican candidates have on Iran's calculations, Nasr is measured. “Iranians are very well aware that it's election year and there is pressure to be tough on Iran,” he says. “But the danger of this kind of talk is that the Iranians [could] conclude that American foreign policy is driven by the dynamics of the campaign, and it doesn’t matter whether they come to talks or not.” While Nasr says it’s difficult to see how talks would actually resolve the issue, “the campaign makes it very difficult to maneuver. The Republicans are not making any room to craft talks that could actually be successful. Talks may not produce results in the first meeting, they could be indecisive, but if the administration is under so much scrutiny from Republicans, that makes it more difficult to have successful negotiation.”

Then, Nasr concluded, “There’s the fact that Iran is in a [parliamentary] election year, so a similar dynamic is in play there.”

Even in the absence of the tension like we’ve seen in the past week, Iran presents an extraordinarily complex challenge. But while counterfactuals are always iffy, it’s very much worth recognizing that this is a crisis that did not escalate. It could have, if the current administration confused strength with belligerence.