Salman Rushdie, back on trial 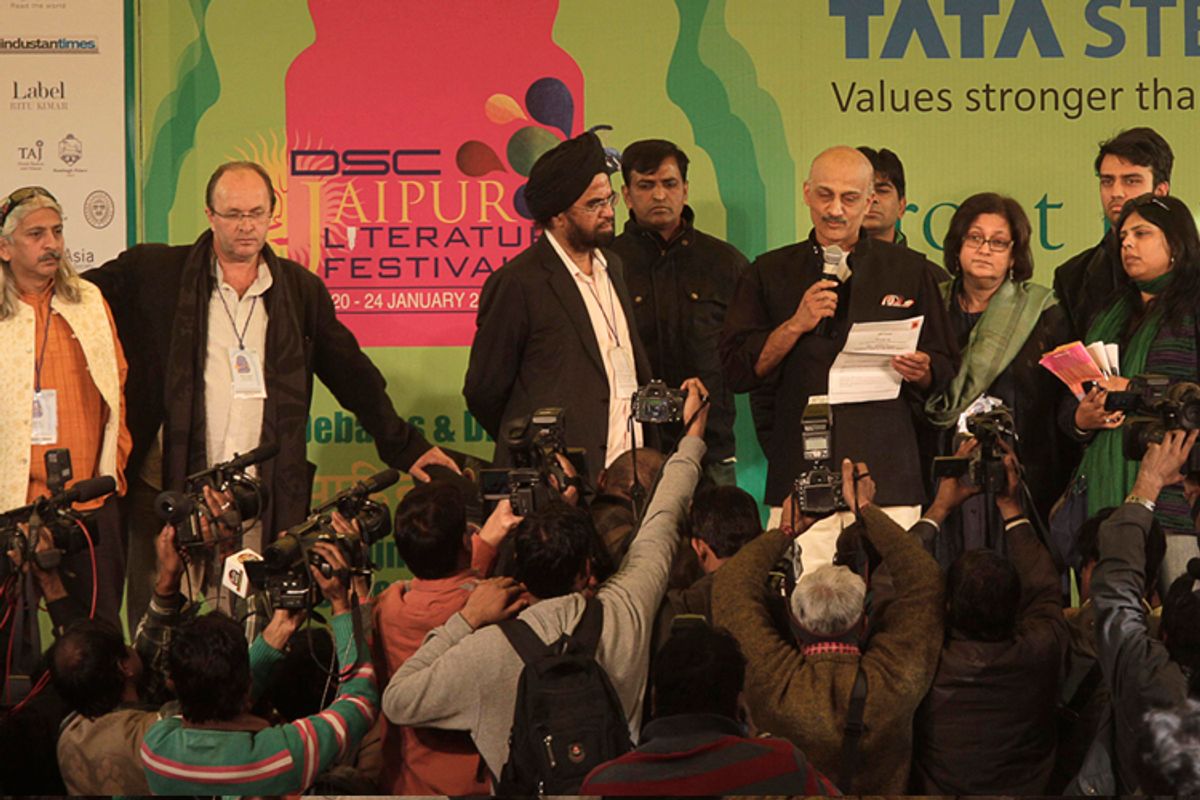 The Jaipur Literature Festival is a remarkable thing. It calls itself “the greatest literary show on earth.” In many ways, it is. Over 70,000 people show up. It’s organized by writers, not event managers. It’s free. Great crocodiles of school children in winter blazers crowd its sessions. Turbaned men with splendidly curled mustaches ladle out steaming hot chai into clay cups for the attendees. Parrots squawk in the trees. Chipmunks chase each other up and down the branches while Nobel laureates and Booker winners hold forth on the lawns. Indian grandmothers and blonde European expats trample over each other, fiercely fighting for seats. (The grandmothers tend to win.) It is a literature festival. But it’s more of a boisterous Indian mela – a fairground where anyone can come.

“We wanted it to be a place where you could meet Salman Rushdie, not just read him. Before Jaipur, you might only have been able to see him at some British Council event,” said William Dalrymple, the festival’s genial host. That was just about a month ago.

This week, the festival became a place where you could neither see nor read Rushdie. You were not allowed to even see his image on a video screen. And four writers had to leave town for the “crime” of reading from Rushdie's novel "The Satanic Verses," which is still banned in India.

Salman Rushdie would have been the biggest literary celebrity at Jaipur this year. But in his absence, he hovered over the festival like Banquo’s ghost. It was hard to find a session that didn’t mention the man. Even the posters lining the entrance seemed reminders of the guest who did not come to dinner. One quoted Lyndon B. Johnson: “A book is the best weapon against intolerance and ignorance.”

In the end, a government and a festival that provided VIP security for Oprah Winfrey was unable to even show a video link interview with Salman Rushdie. The teeming crowds on the front lawns were told that hordes of angry Muslims were marching upon the festival. Some were even inside the grounds. “We feel personally disgraced that after three weeks of struggle we had to give in to those who wish to suppress free speech,” the organizers said in a statement.

The next day the leading English language newspaper in my hometown of Kolkata carried a front-page image of a darkened television screen with the words “Sorry, no transmission because of weak spine” written across it. In a television interview broadcast later, Rushdie did not mince words. “It’s about time we understood, that if this is allowed to go on, that India will cease to be a free country, and that is something, which I think most Indians will greatly regret.” Of course, more people tuned into that interview across the country because of the protesters who shut down its broadcast in Jaipur.

The Rushdie affair unfolded, as he described it, as “a black farce.” It was as if two festivals happened at Jaipur.  On one hand there was a Jaipur Literature Festival with almost 300 writers, talking about everything from atheism to the young Stalin, from Shakespeare to Africa. It included the likes of Richard Dawkins, Michael Ondaatje, Jamaica Kincaid and Tom Stoppard. Rushdie might have called it the Festival of Gup (talk and debate). The other festival was the Festival of Chup (silence). It featured the chimera of Mumbai mafia hit men, silenced writers, an aborted video link and about two dozen protesters performing namaaz inside Diggi Palace, the festival venue.

Now it seems that the paid assassins who were allegedly on their way to kill Rushdie, had he come, were fabricated. It’s not even clear if reading from the "Satanic Verses" is really a criminal offense. (Some lawyers claimed that the book is banned under the Customs Act, which only prohibits its import into the country, not its reading.) Dalrymple says he was told that an 1867 statute made reading from a banned book a criminal offense. The festival could have been shut down. “The police turned up within an hour of the reading. Authors were going to be arrested. We thought we were going to spend the night in jail,” he said. Since then at least half a dozen complaints have been filed against the festival in different cities across India, complaints which could entangle everyone in cases for months to come.

Literary critic Nilanjana Roy quickly circulated a petition asking Prime Minister Manmohan Singh to consider revoking the 1988 ban on the novel, pointing out that the book has never incited violence anywhere. But given that the ruling Congress and the opposition Bharatiya Janata Party (BJP), were pretty much on the same side of the issue, it’s unlikely the prime minister is going to pay much attention. Even though his minister for human resources development, Kapil Sibal, was at the Jaipur festival reading from his own book of poems.

“Cherished freedoms must not be lost,” the minister recited from one of his poems, without any visible trace of irony.

In the aftermath of the Rushdie affair, some of those “cherished freedoms” seem to be endangered, if not lost. An editorial by Praveen Swami in The Hindu called what happened in Jaipur “a milestone that marked the slow motion disintegration of India's secular state.” Rushdie might have become its cause celebre, but he is by no means the first victim, as Salil Tripathi points out in Index of Censorship. Nonagenarian painter M. F. Husain died in exile last year because his paintings offended the Hindu right wing.  A disabled gay painter was assaulted in Delhi this month because his work dealt with homosexual themes. Mumbai University withdrew Rohinton Mistry’s novel "Such a Long Journey" from its syllabus because some Marathi speakers thought their community wasn’t shown in a good light. Films about any remotely sensitive subject are routinely threatened with bans.

“But even if you can ban a film, can you ban the director?” asked Javed Akhtar, an eminent poet and Bollywood scriptwriter. Pakr Farooq, one of the protesters standing on the lawn, could not understand the difference.

“He has written the book,” he said stubbornly. “We cannot prosecute the book. He is the person liable. We do not even want to see his face. Directly or indirectly by video link.”

Farooq was staring at the giant screen as he spoke, his eyes fixed on it, as if waiting for Rushdie to materialize like a djinn.

Farooq’s “victory” could embolden many others like him, of all religious stripes, who know they can hold the state  hostage with just the threat of violence. And the state, whether it’s pusillanimous or pandering, is only too happy to succumb. “Free speech liberals literally don’t count in our democracy,” wrote my colleague Lakshmi Chaudhry on Firstpost. “There are simply not enough of us to matter to politicians on Election Day. There is no ‘liberal vote’ to be courted or appeased.”

“This is a wake up call for a class that wants to keep its hands clean all the time. They don’t understand India is a contested country. You have to roll up your sleeves and jump into the gutter,” journalist and editor Tarun Tejpal told the crowd.

He was met with resounding applause. I looked at Pakr Farooq and his friends. Their faces were impassive. They stood there with Jaipur Literature Festival day passes around their necks. It was a free festival. Everyone could attend, even those who threatened to shut it down. Every protester had his pass. On the way out, each one would turn it in to a khaki-clad security men, his day’s work done. But for now they stood there holding their ground in a sea of people who had turned up to listen to Salman Rushdie, thousands of people upset, angry and frustrated with them.

Impolitic as it was, I had to feel a sneaking sense of admiration.

I don’t know if I could have done the same if the situation had been reversed.

This essay is based on reporting conducted for Firstpost.com, an online site for news, views and analysis on India.