When we adopted Jake at 7, we waited years before letting a psychologist label him. Others haven\'t been so kind 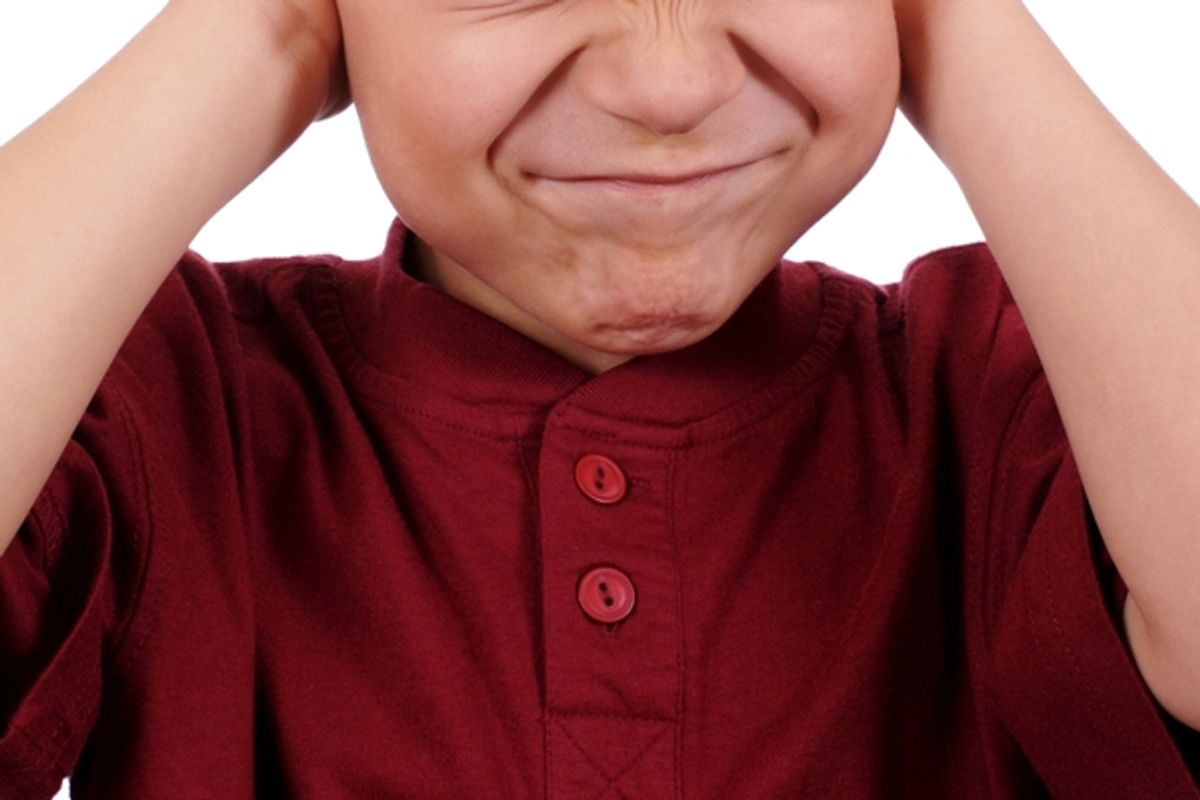 “Sounds like your son has Asperger’s syndrome,” she said. “Have you ever thought of that?”

I looked back at my son, hanging upside down on the monkey bars. “Sounds like you have Asshole syndrome,” I said. “Have you ever thought of that?”

In my head, I said that. What I said out loud was something like, “We think he’s just Jake, and that’s good enough for us.”

“Well, he might have Asperger’s,” she pursued. "And you should have him tested.”

My actual words were, “We’re not interested in labeling him at this point.”

I was standing under a tree with a woman from our home-school play group when this dreaded “developmental milestones conversation” occurred. Her son had all his multiplication facts memorized; mine still hadn’t memorized addition facts. Her son was complimented for being polite; mine often ignored other children's personal space. Her son was reading three grade levels ahead; mine was reading three below.

Well-meaning folks, I discovered, were happy to share their unsolicited pop psychology diagnosis of my son, certain I’d be grateful for the 15 seconds of thought they put into it. In modern American culture, we are quick to participate in the labeling melee. Someone's “ADD is kicking in,” and another is “so OCD,” and their boss is “obviously bipolar.” It’s common lingo. So why not label a kid who seems a bit different?

But it was this labeling issue that smacked me in the face when I became a parent.

In 2002, my husband, John, and I traveled to Ukraine to adopt our son. Jake was 7 ½, weighing 35 pounds and speaking rapid Russian, he raced into our lives like a little tornado. The adoption process prepared us for disabilities. We were told Jake had “psycho-motor delay,” a common catch-all meaning “he might be slightly behind.” He couldn’t read or write, not even his own name.

The typical route for most parents adopting older children from a foreign country is to have their kids evaluated as soon as they return to the States. We hesitated. “Of course he's going to have delays," John said. "He’s lived in an orphanage his whole life and he’s the size of a 4-year-old.” Before a professional informed us what was wrong with Jake, we wanted to let Jake show us who he was on his own.

The first weeks at home were thrilling and exhausting. Jake explored everything. He played with our two German shepherds, he flipped light switches off and on and off and on. He opened the front door and ran into the street with the dogs. He touched everything and sniffed everything else. He hugged anyone who showed him kindness, including the baggers at the grocery store.

He was curious, joyful and supremely energetic. He pounded trees with sticks, broke branches off the bushes to use as play swords, did flips off his bed, tried to do pull-ups off the bathroom towel bar. He enchanted and amazed us.

But he was also fidgety. As I began working with him on numbers or letters in brief sessions, our son demonstrated the attention span of a flea.

“He might have ADHD,” I told John. “He just can’t focus on anything — unless it’s something he really wants to do, like build with Legos.”

John could relate. As an adult he self-diagnosed his ADHD and understood what it was to grow up unfocused. With Jake’s 12-word English vocabulary and overabundance of energy, we decided to home-school him, at least until he caught up.

That first year was glorious. We went to the zoo every two weeks as part of animal study. We caught bugs in the backyard and took nature hikes. We cooked. We sang. We danced. We worked on letters, numbers and sounds. Jake thrived, and we kept going.

But after two and a half years, we hit a plateau. Jake was stuck. And I couldn’t figure out how to unstick him. John and I began to believe a diagnosis might help now, if only because it would help us figure out how to help him.

His assessment was no surprise. It included ADHD, dyslexia, dyscalculia and auditory processing disorder. Overwhelmed but determined, I hoarded books from the library, talked to specialists and surfed the Web for techniques and curricula that would match his multiple diagnoses -- and the boy I knew.

And a new question arose: What do we tell Jake?

I’ve talked to many parents, of both adopted and biological children, who’ve struggled with the same dilemma. Our kids usually know they’re different, but they often don’t understand it.

Some parents bust out the clinical terms and explain each: ADD, OCD, SID, ADHD, Asperger’s, autism. The alphabet soup of the multi-diagnosis becomes part of the family’s regular dialogue. Others take a less scientific approach, focusing on their child’s gifts and differences rather than deficits. We wanted to celebrate those differences, but also understand and work around his deficits, making certain he sees there’s a place for him in the world. Where was that line between cold analysis and sugarcoated truth?

John and I tried to find a middle road that explained his diagnoses but focused on his uniqueness. So ADHD became: “You have a turbo-charged jet engine that likes to move fast.” Dyslexia was: “Your eyes sometimes flip words around like a carnival ride, which makes it hard for you to see what’s actually on the page.” And auditory processing disorder was: “Sometimes things float in the shallow end of your mind for a while before they go in deep so your brain can make sense of them.”

I think these gave Jake a sense of peace. But that didn’t mean we didn't have problems. A few months later, mid-morning of an early fall day, the kitchen table was stacked with school books and laptops, mugs of hot tea, and plates scattered with pumpkin muffin crumbs— and Jake was in the throes of a full-scale math meltdown.

“There’s something missing in my brain,” Jake wailed. “I’m missing a wire somewhere that ruins my thinking. I think God made a mistake on my brain.”

“Jake,” I said his name clearly and firmly, and as lovingly as possible, “there is nothing wrong with you, and God does not make mistakes.”

We pushed math aside for the day and took the dogs for a walk. Outside, I told Jake a piece of his story, our story. A story he’d heard before.

“On the day we met you,” I said, “your dad and I were amazed by your joyfulness. Here you were, abused and practically starving, yet you decided you would find joy in life. Now your dad and I are here to help you remember the Jakeness deep inside you — and to help you work on everything else. You don’t have to survive on your own anymore. You have a mom and dad — and five dogs who love you. And you know how much those dogs love you!”

The smile returned to Jake’s face, and we talked about happier things. In the weeks following, I consulted with experts, researched new curriculum, and tried to focus on what was right about Jake rather than what was wrong about Jake.

Friends helped in ways they couldn’t possibly understand. Every few weeks, someone shared a story about Jake’s happy spirit -- how he’d walked all the way across the room to say hello to them or told another kid not to make fun of someone, and I stored these nuggets as precious jewels, never knowing when we'd need affirmation that other people saw the specialness in our son, too.

About a year later I turned a corner in our home-school co-op just in time to see Jake scamper down the hallway, peek into a classroom, pound on the door and run away. “Jake!” I whisper-shouted.

“Oh, that’s your son,” a voice said from behind me.

One of the co-op board members gazed at me down the hallway. “Yes,” I said, “that’s Jake.”

“He’s completely out of control,” she declared.

My skin prickled. “He has boundary issues,” I said, “but he’s not completely out of control.”

“No, he’s completely out of control,” she said. “I know exactly what he needs.”

“I bet I can tell you exactly what you need,” I declared, in my head. Instead, she rattled on while I entertained thoughts of stuffing her into a supply closet.

Aloud, I mumbled, “Thanks so much.”

I retracted my claws and headed toward the multi-purpose room to reprimand my son. I found him helping a harried mom of seven with her unruly toddler. There would be ample time to scold, but just at that moment, it was time to appreciate what my son was doing right.

Debra Hanlon is a former high school English teacher and community college composition and literature instructor, now a home-school mom. She lives in northern Illinois with her husband, her son and their five German shepherds. Her occasional blog is LifeItIs.org—Insights and Incidents.