Why the GOP race could be irrelevant

While the Mitt and Newt show rolls on, Obama is enjoying some of the best news and best poll numbers of his term 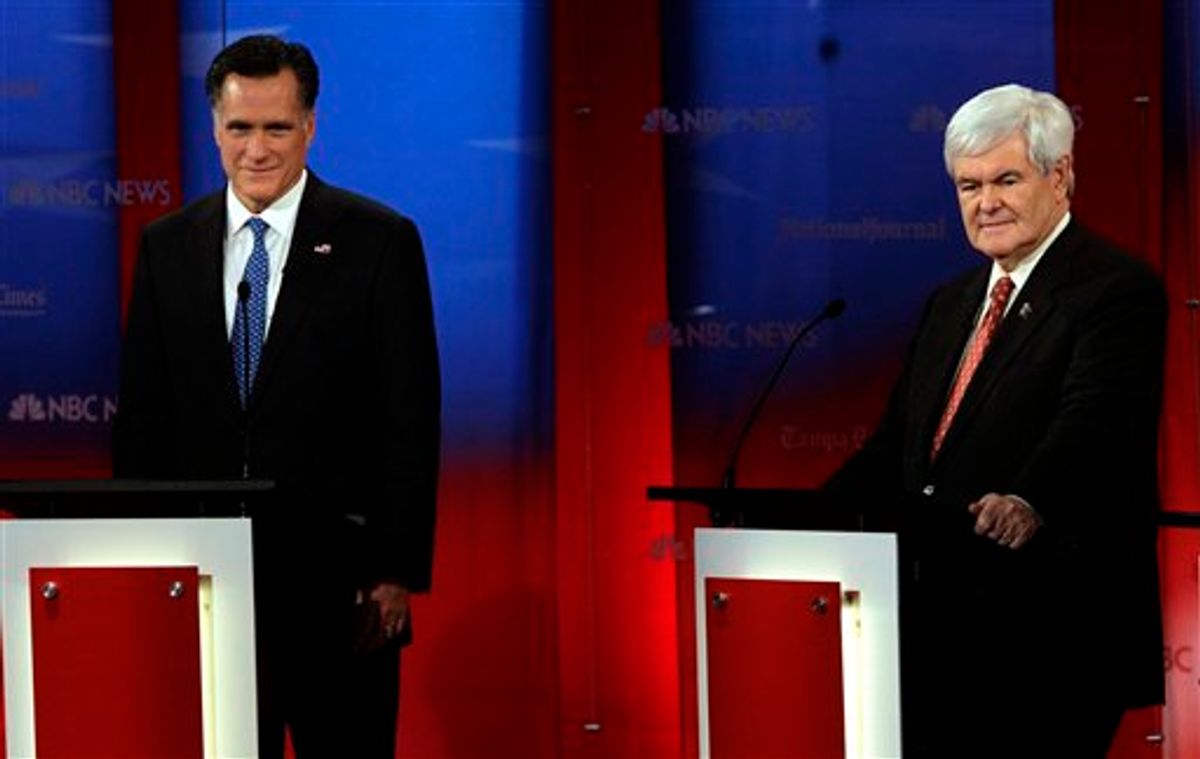 Republican presidential candidates have devoted months, if not years, of their lives to chasing their party’s nomination, they’ve raised and spent (along with their super PAC allies) tens of millions of dollars, and they’ve participated in more than a dozen debates – each of which has attracted a massive television audience.

But a startling new poll underscores what has got to be a maddening possibility for Republicans: It could all be for naught – and there may be nothing they can do about it. The NBC News/Wall Street Journal survey points to a measurable uptick in optimism about the country’s economic direction, and in the public’s assessment of President Obama’s performance.

By a 37 to 17 percent margin, respondents said they expect the economy to improve in the next year; back in October, they thought it would get worse by a 32-21 margin. And the number of Americans who believe the country is heading in the right direction now stands at 30 percent – hardly a huge number, but a clear jump from the 17 percent who said so in the fall. Overall, Obama’s approval rating is at 48 percent, the highest it’s been in an NBC/WSJ poll since June, when he was still basking in the afterglow of Osama bin Laden’s demise.

The numbers are a reminder that a president’s reelection fate is ultimately more dependent on the state of the economy than on what strategy the opposition party employs and which candidate it nominates. If economic anxiety and pessimism are rampant, then winning a second term is a profoundly uphill slog, even if the opposition fields a supposedly weak nominee. But if the public widely believes that conditions are healthy or at least improving, then credit – deserved or undeserved – invariably goes to the White House occupant.

More than anything else, this is why Obama, for all of his (perfectly valid) reminders that the economy he inherited was in free fall and that the 2008 meltdown had occurred on his Republican predecessor’s watch, enjoyed such a brief polling honeymoon at the start of his presidency and why he’s been saddled with mostly meager numbers since then. The overriding tendency of swing voters is to find reasons to express displeasure with the president when times are tough, and to look the other way when they’re not.

But the past few months have brought some of the most encouraging economic news of the Obama presidency. The most recent jobs report, released at the start of this month, pegged the unemployment rate at 8.5 percent, the lowest it’s been in three years and showed the economy adding 200,000 jobs in December. As Salon’s Andrew Leonard put it when the report came out:

With good economic news in the headlines, it’s hardly surprising that we’re now seeing real signs of public optimism, with a corresponding improvement in Obama’s own political standing.

To be sure, the NBC/WSJ numbers are tenuous; the progress that Obama has made these past few months can easily be erased in the next few if the recovery falters or regresses. The example of the last one-term president, George H.W. Bush, looms large here. He actually seemed in decent shape to win reelection in the early months of 1992, but in the middle months of the year, the bottom seemed to fall out of the economy, at which point he fell behind Bill Clinton in polling and never regained the lead the rest of the way.

But it can work the other way too. You’d never know it from the hagiography that has set in, but at the halfway mark of his first term, Ronald Reagan was largely seen as a failed president. This was the result of a nasty recession that took hold about eight months into his presidency and that ultimately pushed the jobless rate to over 10 percent. His party suffered a drubbing in the 1982 midterms, his approval fell to the 30s, and polls showed his most likely Democratic opponents running well ahead of him.

But by the time the 1984 Democratic race, which turned into a months-long battle between Walter Mondale and Gary Hart, wrapped up, the economy was growing at a rapid rate, with unemployment falling, public confidence swelling, and Reagan’s approval rating surging. It rendered the Democratic race practically meaningless; Americans wanted to reelect Reagan, and they did by an 18-point margin.

Obama is obviously not on course for that kind of landslide. The scale of this recovery is not nearly as dramatic as that of the mid-'80s. But if it endures, so will Obama’s polling comeback. And if that happens, there won’t be nearly as many sympathetic ears this fall for the Republican argument against him.