As other parts of the nation recover, certain communities from Dodge City to Durango remain in persistent decline 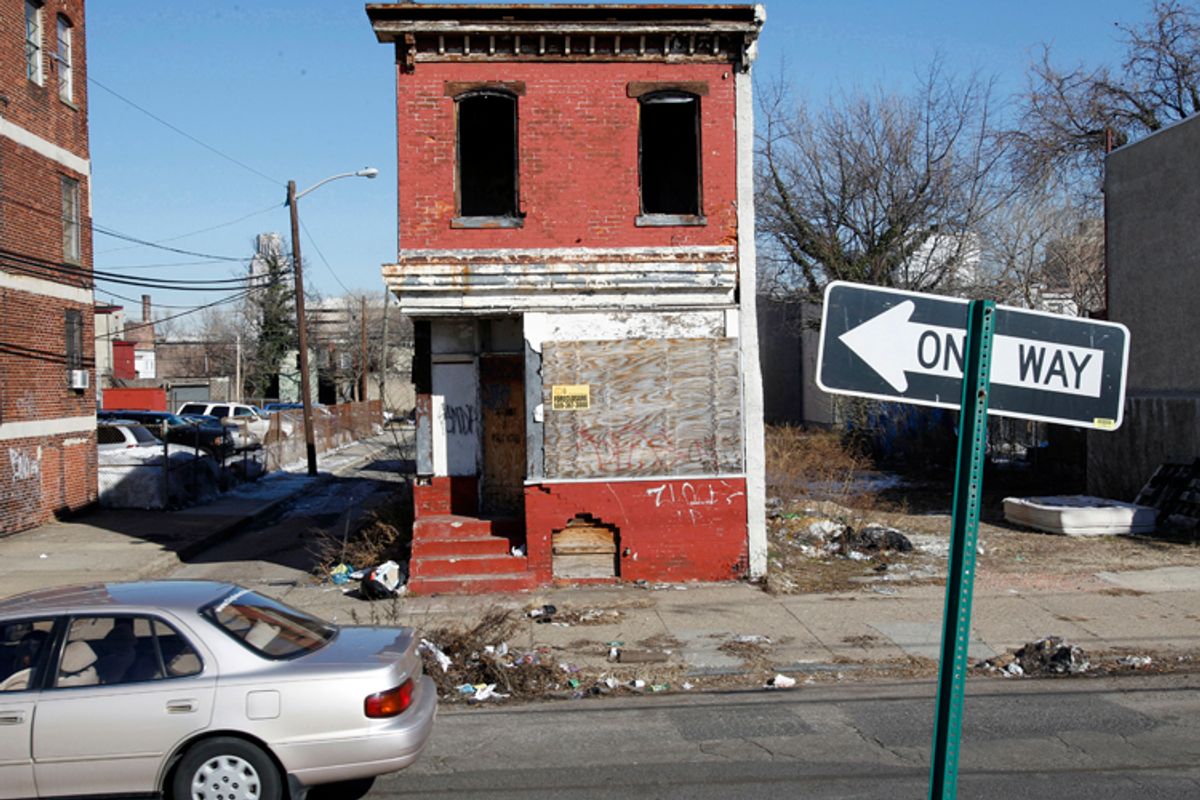 Recent headlines of a brighter economic picture have given many people hope that the economy is not in another free fall. GDP growth did tick upward in the last quarter. But for many communities the picture is enduringly dark, because unemployment rates have lagged far behind the national average for years and will likely continue to do so.

While the president is putting forth a plan to help students pay off their student loans, more and more educated students are unable to find employment. Contrary to popular belief, an educated workforce doesn't really make a difference (areas with many college grads are actually doing worse than areas with fewer) and a diversified economy does not always mean a more thriving economy.

A Place Near You?

There are 216 defined metropolitan (metro) and micropolitan (micro) areas — with populations ranging from 10,000 to 4 million — that have had unemployment rates at least two percentage points higher than the national average for either 20, 10 or 5 years (see tables 1, 2, 3 at the end of this article). These are America’s dead zones. Here employment growth is stagnant or non-existent and high levels of joblessness dominate. Some areas were once prosperous while others have recently experienced economic distress. In these communities paid work is hard to find for those who have not given up looking, and widespread involuntary idleness is the norm.

Poor employment prospects are not related to periods of recession or prosperity; these communities have not had substantial and sustainable increases in employment for lengthy stretches. America’s dead zones can not be described as containing “weak labor markets” because many have had long term unemployment problems that are more than weak and not temporary. Even in zones with only five years of high unemployment, the prior years were hardly marked by robust job growth.

These dead zones include both rural and urban areas. Though each area is different, there are some trends. The Northwest dead zones (Oregon, Washington and Northern California) historically had large numbers of jobs in the timber and fishing industries. Because of overfishing, many coastal communities saw jobs vanish. In addition, when the Spotted Owl was placed on the endangered species list in 1982, it forced the shuttering of many timber yards because of encroachment on newly protected forestland. Along with general overharvesting, the timber industry has been flagging ever since. Many dead zones in the Northwest now rely upon tourism and retirement as their major industries, both of which are seasonal and sensitive to fluctuations in the broader economy.

The Southwest dead zones (Southern California, New Mexico and Texas) industries historically employed substantial labor forces either working on farms or in trade with Mexico. In both cases, employment tended to rely on the large scale movements of temporary workers. This huge amount of seasonal work has created the highest metropolitan unemployment rates in the U.S.

Employment in the Deep South has never fully recovered from the decline of the cotton industry and mechanization. Since then southern dead zones have experienced considerable emigration, and many areas have not made progress towards the development of alternative industries.

Dead zones along the Appalachia and Atlantic Coast (Kentucky, West Virginia, North Carolina and Tennessee) have relied either on coal or timber industries, both of which suffered steep declines in the 1970s and have yet to fully recover.

The Rust Belt’s dead zones were all once dependent on various manufacturing industries, usually but not always in the automotive. The growth of outsourcing and the decline of the American auto industry throughout the 80s and 90s left few other avenues for employment.

The picture is very different in America’s prosperous zones, where unemployment has been at least two percentage points below the national average for at least five years (see table 4 at the end of this article). These communities tend to be less populous than dead zones, and here employment is growing and sustainable. The wide variation in rates of unemployment between prosperous and dead zones is displayed below (click on the image to enlarge):

Most of the nation’s prosperous zones are dominated by one successful industry, such soy farming in Kansas or scientific research in New Mexico, oil and gas in Texas and places where major research institutions and universities exist. Agricultural prosperous zones grow corn, wheat and soy and, unlike the Southwest, are not totally reliant on migrant labor.

Few prosperous areas are based on broad and diverse industries. Almost all of the areas — both prosperous and dead zones — are or were based on one or another major industry. Tens of millions of Americans live in dead zone areas that have experienced a steady decline in their industrial base and have not developed new sources of employment, while prosperous zones rely heavily on one or two dominant industries to maintain high levels of employment.

The map below presents a visual representation of dead and prosperous zones (click on image to enlarge). It shows, for example, that dead zones have existed in the South dating as far back as two decades. Furthermore, the last five years of data show almost no development of prosperous areas. The unevenness of the current national recovery is starker in dead zones, where unemployment rates have been high for longer periods of time.

Dead zones areas are evenly distributed throughout the entire contiguous US except for the Upper Midwest and New England. Prosperous zones are almost entirely comprised of the Upper Midwest down to Northern Texas and New Mexico. The surprisingly low levels of unemployment in the Upper Midwest can partially be explained by low population levels, and therefore a low supply in the labor market. There is considerable anecdotal evidence suggesting dead zones exist in certain areas of the upper Midwest (Indiana, Ohio, Illinois, Michigan, etc), but the way data is collected in these states makes it hard to identify these areas.

The numbers capture only part of the story. Metro and micro areas are defined as encompassing one or more cities as well as adjoining areas. In some cases, one large city may be lumped together with two smaller communities for the purpose of describing an area; one city’s chronically high unemployment might be masked by the lower figures of its neighboring communities. Thus America’s dead zones are not limited to areas listed in the tables. Other areas, many larger than 600,000, some smaller than 50,000, contain sections (if not whole cities) that could be classified as dead zones and where high unemployment rates are common.

While different methods of gathering government data make it harder to assess the unemployment picture in New England, long-term dead zones exist in former manufacturing and mill towns such as Lawrence and Fall River, Mass., Waterbury, New Britain and New Haven, Conn., and Providence and Central Falls, R.I. These cities have characteristics similar to dead zones. In more and more American cities the lack of opportunities and poor job prospects point to the existence of more areas that have not been, but should be, recognized as emerging dead zones.

Conventional wisdom suggests that areas of high unemployment would benefit if resident populations had higher education achievement-rates, that is, more college graduates and fewer high school dropouts. While this may be true in certain situations, it is not necessarily the case in either prosperous or dead zones. In fact there is a very weak correlation between low unemployment and educational-attainment rates (defined here as the percentage of the population over 25 with a high school degree or less and the percentage of the population over 25 with a Bachelor’s degree or higher).

There are large numbers of dead zones with a highly educated populace (for example, Hood River, Ore., Ocean Pines, Md., and Santa Cruz, Calif.). On the other hand, there are many prosperous areas with low education rates (Dumas, Texas, Lexington, Neb. and Storm Lake, Iowa). Since education is only one factor in determining labor quality, and labor quality itself is only one factor determining where a business will base its operations, this relatively weak correlation should come as no surprise.

While newspaper headlines note high unemployment rates in Camden and Newark in New Jersey and Los Angles in California, America’s dead zones remain outside the arena of discussion. Few are aware of the troubling trends that make solving the nation’s unemployment problem more difficult than imaginable. Restoring recovery and reversing employment trends in America’s dead zones will not be easy and will take time.

Can more jobs be created in dead zone areas? Not if the solutions offered focus only on the short term. Creating employment opportunities that last cannot be accomplished by just increasing federal grant money for infrastructure or raising budgets for tourism advertising (as suggested by the U.S. mayors association report). While these remedies provide temporary employment, a good thing, they don’t deal with the hundreds of communities that have one-dimensional economies. These communities, even after the temporary solution, are still overexposed to fluctuations in the industry they rely on — so when the funds disappear, unemployment spikes once again.

In dead zones, most people are unwilling or unable to move to other areas with better employment prospects even up to a generation after economic decline sets in. Therefore the only effective solution is to bring jobs to these communities by making them more attractive to a diversified number of industries that require workers with various skill levels. (That is, avoid having communities that can be Apple-ized).

We need to think differently about where we live and work. Too often communities across the nation are given blanket treatment as if their problems are interchangeable. But that is not the case. Each metro/micro area has its own particular geography, resources, population characteristics, etc. that make it hard to generalize about solutions to unemployment. Local governments may be best positioned to understand the needs of their respective areas — and, of course, they may need federal and state money to improve education, make long-term infrastructure changes and offer industries opportunities to expand. But if local governments continue to focus only on short-termism, dead zones will not fade away. What many proposed solutions ignore is how hard it is to imagine a business relocating or expanding operations — creating jobs — in dead zones that they view as deteriorating.