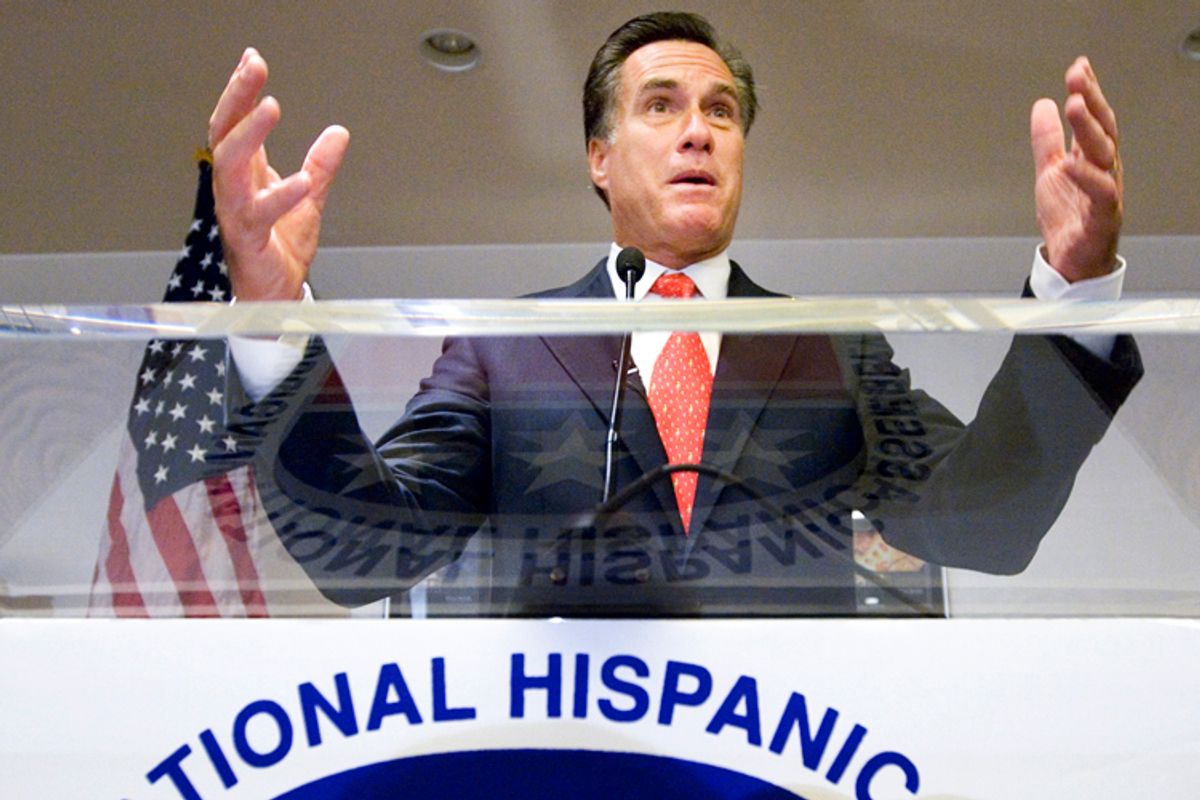 In the past 48 hours, immigration politics and the fight for the Latino vote hijacked the 2012 campaign. First came Wednesday’s tarmac dust-up between President Obama and Republican Gov. Jan Brewer during the first of three stops the president made this week to Southwestern states with significant Latino populations critical to his reelection. Later that night during an interview with Univision, Obama made headlines by lambasting the Republican Party for blocking passage of the DREAM Act.

On Thursday morning, former Florida Gov. Jeb Bush joined the conversation with a Washington Post Op-Ed in which he suggested four ways the GOP can lure back Latino voters, including a recommendation that the party cast immigration as “an economic issue, not just a border security issue.” That afternoon Michelle Obama raised the stakes in the electoral fight for Latino votes with a “Let’s Move” national fitness agenda stop at Tampa’s Goya food processing plant, where the first lady touted the USDA’s new “Mi Plato” program, lamented the shortage of supermarkets in Latino neighborhoods, and applauded the National Hispanic Medical Association, the National Council of La Raza, and the League of United Latin American Citizens for their community nutrition efforts.

So there was ample  anticipation heading into last night’s debate co-sponsored by the Hispanic Leadership Network in Jacksonville just four days before the crucial Florida primary. And once onstage at the University of North Florida, Mitt Romney and Newt Gingrich did not disappoint. The two top contenders went after each other with obvious, mutual disdain on immigration, the subject of the opening question and nearly the full first half-hour of the debate.

Romney began with a thoughtful answer to an audience member’s question by delineating the three classes of immigrants as he sees them: those already here, those being brought here under illegal and often abusive circumstances by so-called coyotes, and those waiting to come here legally. CNN moderator Wolf Blitzer stirred the pot by asking Gingrich to defend calling Romney the “most anti-immigrant” candidate in the field, and Gingrich obliged. Romney objected to Gingrich’s overblown rhetoric, cited Marco Rubio and his Mexican-born father in his own defense, stressed a belief in legal immigration, and mocked Gingrich for his “highly charged epithets.”

A chastised Gingrich retreated to his impassioned arguments against the “unrealistic” deportation of families, and grandmothers in particular, who have lived in the country for many years — a position that earned him plaudits during a November national security debate in Washington. But then Romney, in one of his best debate moments of the entire campaign, drew cheers by deftly retorting that “our problem is not 11 million grandmothers.” For Romney, who has struggled to demonstrate whether he is capable of being tough in person (his television ads are another matter), immigration gave him the chance to prove he, too, can display Gingrichian outrage and he did just that. To paraphrase Emily Dickinson, the South Carolina-wounded Romney leapt highest.

As for immigration, the GOP’s electoral dilemma persists: The candidates must appease xenophobes within their base during the primaries, but to win in November the Republican nominee will need to be reasonably competitive with Latino voters in swing states including Arizona, Colorado, Florida, Nevada and New Mexico. As a hedge, Republicans tend to emphasize the legal aspects of immigration: strengthening border security, prosecuting crimes committed by illegal immigrants and cracking down on employers who employ undocumented workers. This is how Santorum and especially Romney try to remain anti-immigration without sounding anti-immigrant.

Jeb Bush’s Op-Ed reflects the party’s strategy for trying to carefully lure back Latinos by emphasizing the economic aspects of immigration reform while downplaying talk of deportation and amnesty. “There is no doubt that immigration is an important issue to the Hispanic community and one that must be discussed because it is clear that our immigration system is broken,” Bettina Inclan, director of Hispanic outreach for the Republican National Committee, wrote to me by email. “However, poll after poll has shown that the top issues for Hispanics when making a decision in the voting booth are jobs and the economy.”

Meanwhile, Democrats are enjoying this fight. Immigration remains a great wedge issue for them. In his interview with Univision, the nation’s largest Spanish-speaking network, Obama specifically criticized the Republicans in Congress and “two presidential candidates” for, respectively, obstructing legislative passage and promising to veto the DREAM Act. Obama said he continues to seek a solution to comprehensive immigration reform, but “if we can’t do the whole package, at minimum let’s get the DREAM Act done.”

Romney is the first veto-pledging candidate. Facing criticism since 2008 for his social issue moderation, Romney gambled that a hard line on immigration might pacify wary conservatives. In a September speech to the National Republican Hispanic Assembly in Tampa, Romney promised to build a “high-tech fence,” crack down on employers who hire illegal immigrants, and eliminate the government “incentives” like in-state tuition. That last part was a thinly veiled attack on Rick Perry, who was already taking heat for his support for tuition benefits at Texas universities for the children of illegal immigrants. Not-so-thinly veiled was the devastatingly effective anti-immigrant ad Romney ran against the Texan.

“Romney’s words might not hurt him in Florida,” where Cubans are less supportive of immigration reform, Univision columnist Jordan Fabian predicted this week, adding that “reform that includes a pathway to citizenship for undocumented immigrants consistently ranks as a top issue for the broader Latino community.”

The second DREAM Act opponent is Rick Santorum, who has staked out the firmest immigration stance among the remaining contenders. “You know we want to be fair,” Santorum said last Sunday, adding that “the law is the law and we have to have a country that is respecting of all the law and if we don’t then we don’t have much of a country anymore.” The clear outlier in the GOP field is Gingrich, who supports applying the provisions of the DREAM Act to illegal immigrants who serve honorably in the U.S. military. (Despite the nearly 30 minutes in Jacksonville spent on immigration, the DREAM Act was not mentioned.)

While Republicans dodge the issue by reverting to legal arguments, Democrats consistently opt to frame immigration in highly personal terms. The Democratic National Committee lined up local politicians yesterday afternoon to fire preemptive shots at Romney. “I think we all understand how personal immigration issues can be to so many of our families. Even those of us who are documented may have a friend or a grandmother who is not,” said state Rep. Darren Soto, of Orlando, during a Thursday press call. “So when Romney says something like they should ‘self-deport,’ it’s personal.”

Last night’s debate was certainly personal for Romney, who needs to win Florida. For the first time in this campaign, the former Massachusetts governor faces the very real prospect of fumbling the nomination, no less to a man with the flaws and baggage of Newt Gingrich. Coming off the roughest fortnight of his campaign, Romney was prepared: on the talking points, sure, but also in his determination to beat back Gingrich, even if meant feigning a little anti-immigration outrage to do so.

He helped himself in the short-term, with a long-term cost to be determined.