The self-destruction of Newt Gingrich 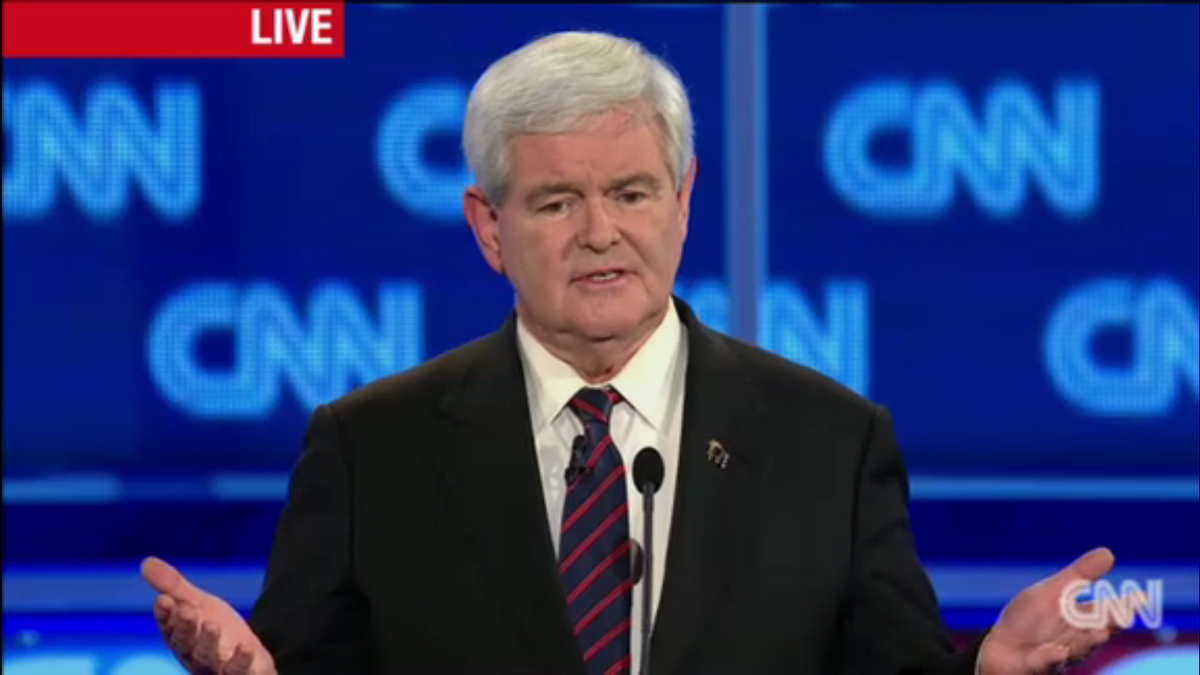 The fundamental problem, to use the sort of language he prefers, for Newt Gingrich at Thursday night’s debate was that his instincts were at odds with his main imperative.

Gingrich took the stage with his Florida prospects dimming by the minute. Polls earlier in the week had shown him opening a significant lead in the state over Mitt Romney, but by Thursday afternoon there was clear evidence that Romney – boosted by sharp attacks against Gingrich that have been amplified by many influential conservatives and by a massive television blitz – had reversed the tide. So Gingrich was in obvious need of one of his trademark debate moments, something to recapture the base’s excitement, dominate the free media and overcome the many powerful forces arrayed against him.

The problem was that Gingrich’s debate moments, which slowly elevated him to contender status last summer and fall and which helped revive his campaign in South Carolina last week, have had an organic quality to them. Certain ingredients – like rowdy, partisan audiences and clumsy moderators and media panelists – are helpful, if not essential. But as Gingrich himself recognized in a Newsweek interview back in December, there’s just no forcing the big, defining moments.

“You can’t do that, because you will look like you’re trying to hit a home run,” he said. “What you have to do is go in and look very stable, so you look competent. And you have to be very patient.”

This was the crux of Gingrich’s dilemma on Thursday night. Without a Big Moment, he’d be left with no way to steal back the momentum and regain the lead before next Tuesday. But unless he got lucky and the moment presented itself, he was going to have to break his own rule and try to force it.

And that’s exactly what he did about 30 minutes in – and the result was devastating. It was at the start of the second segment that moderator Wolf Blitzer brought up a comment Gingrich made at a forum in Miami earlier this week, where he belittled Romney for living in “a world of Swiss bank accounts and Cayman Island accounts and making $20 million for no work.” In his most effective debate moments, Gingrich has lashed out at moderators and rallied the partisan audience to his side. He called the same play here, deriding Blitzer’s question as “nonsense.”

“How about if the four of us agree for the rest of the evening we'll actually talk about issues that relate to governing America?" he asked.

Blitzer observed that Gingrich himself had made the comments about Romney – he was just asking about them.

"I did,” Gingrich replied. “And I'm perfectly happy to say that in an interview on some TV show. But this is a national debate where you have a chance to get the four of us to talk about a whole range of issues.”

It was here that Romney spotted an easy and effective opening. After Blitzer told Gingrich that “if you make a serious accusation against Governor Romney like that, you need to explain it,” Romney himself spoke up.

"Wouldn't it be nice,” he asked, “if people didn't make accusations somewhere else that they weren't willing to defend here?”

At that, the crowd went wild. It was the first time that the cheers at the end of a Gingrich confrontation with a moderator had come for a candidate besides Gingrich. Then, almost as if to taunt him, Blitzer told Gingrich that he was ready to move on to the sort of substantive topics that Gingrich was so eager to address if he was. But Gingrich couldn’t let Romney’s line go, and tried to offer a comeback. But it didn’t really matter. The moment was over and Gingrich had lost it – badly.

It wasn’t hard to see why Gingrich pulled such a clumsy, desperate stunt. It came after the debate’s first segment, in which Romney had practically wiped the floor with him in an extended debate over immigration. After Gingrich made the case for his “realistic” approach to deportation and told Blitzer that he considers Romney the most “anti-immigrant” candidate in the race, Romney raced for the moral high ground.

“That’s inexcusable,” he said of the characterization. “That’s simply inexcusable.” What followed was a crisp, confident lecture on civility in which Romney chastised Gingrich for his “repulsive” antics and for resorting to a “a kind of over-the-top rhetoric that has characterized American politics for too long.”

“Having a difference of opinion does not justify labeling people with highly charged epithets,” he declared. The audience was firmly on his side on this one, and why not: Romney was the more confident candidate arguing for a more conservative position and topping it all off with a hefty dose of moral righteousness. Gingrich’s defense, meanwhile, seemed flat and halfhearted – just like his performance in Monday’s debate.

Romney did not emerge from the debate unscathed. For instance, when Gingrich tried to tie Romney to Fannie Mae, Freddie Mac and Goldman Sachs through his investments, Romney replied: “First of all, my investments are not made by me. My investments for the last 10 years have been in a blind trust, managed by a trustee.” As Democrats were quick to point out, Romney’s Fannie and Freddie investments actually weren’t through a blind trust.

But given Gingrich’s dreadful performance on Thursday – the second time in as many debates that he’s undermined his central pitch to Republicans, that he’d be Barack Obama’s worst nightmare in a debate – this probably won’t matter much in Florida. The momentum that Romney had before the debate will probably accelerate now.