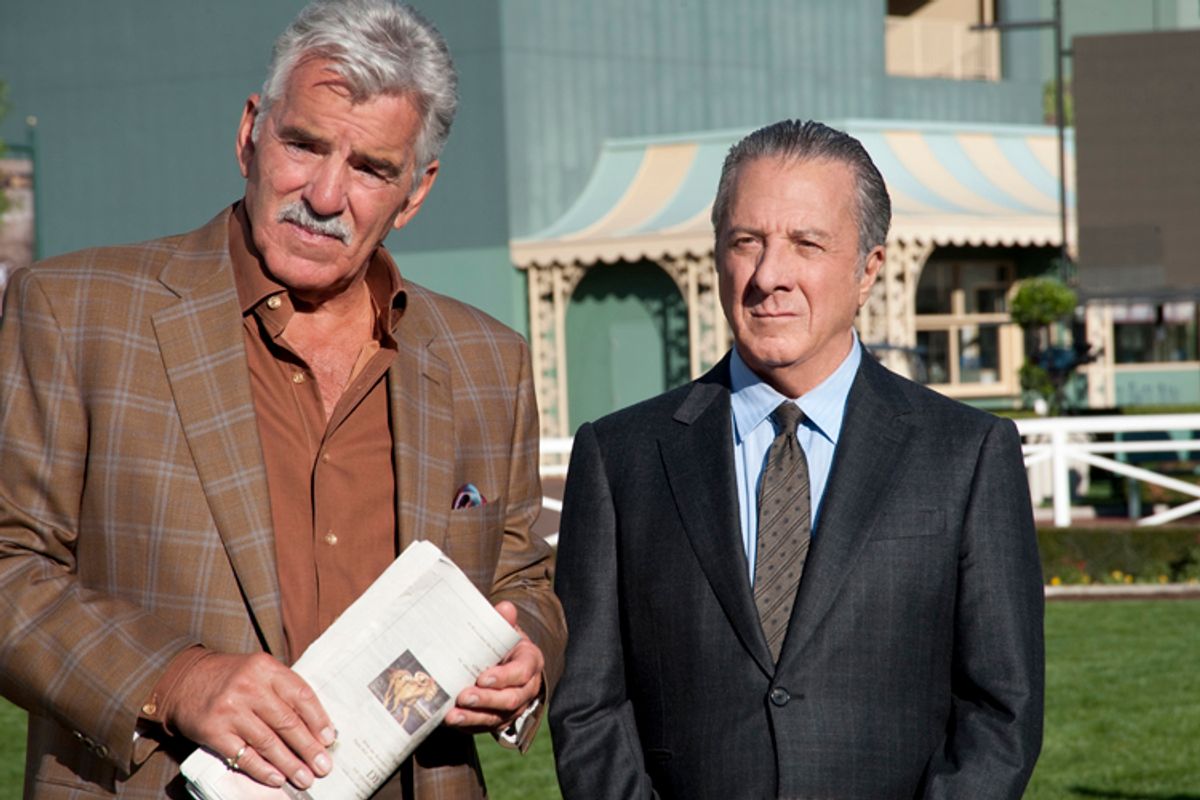 HBO has always been a good place for the literary-minded David Milch, the brainy former Yale lecturer. (Of course, the networks weren't bad either; Milch created “NYPD Blue” while still working on “Hill Street Blues.”)

Milch conceived the richly detailed retooled western “Deadwood,” with characters spouting the prosaic and profane. If "Deadwood" ultimately didn’t have an ending, Milch's next project, “John From Cincinnati,” almost didn’t have a beginning; the spiritual metaphor set in the underbelly of the surfing world lasted just a season.

With “Luck,” which begins Sunday on HBO, he’s got a better shot at longevity, while still creating groups of scruffy underdogs in seedy motels and grandiose, malevolent businessmen all buzzing around the same goal. In “Deadwood,” it was gold; in “John,” spiritual enlightenment. In “Luck,” it’s the hard-won riches and redemption captured through the majesty of horse racing.

Creating these various worlds means creating their own language and jargon, something Milch is especially adept at doing (or perhaps he’s so subsumed in the world of the track after his own years hanging out there, it’s second nature). All of these terms and vocal shorthand can be off-putting to audiences at first – especially when they’re mostly mumbled by the characters.

That makes “Luck” more difficult to penetrate for the uninitiated than his other work. To speed things along, HBO is making the second episode available online immediately after Sunday’s first. But it may have already fumbled its initial rollout; that hard-to-follow first episode, introducing nearly all of its mumbling, jargon-spewing characters, ran as a “sneak preview” with the “Boardwalk Empire” season finale in December, possibly managing to quickly turn off those who would have otherwise given it a chance. Call it getting tangled at the gate.

“Luck” shows a fairly insular world of desperate, middle-aged men with thinning hair, willing to throw it all on a last dream. Women are far on the periphery, even more than they were in “Deadwood.” And the Peruvian trainer at the center of two different story lines, played by John Ortiz, is as close to racial diversity as it gets (other than a casino foe drawn as if he were the Yellow Peril).

Still, “Luck” plays out like a last-ditch shot at the American dream in a dire economic time. One problem gambler recites “O beautiful for spacious skies” when his horse finally comes in; a limousine driver turned horse-owning front for a just-sprung felon keeps saying things like, “I love this country!”

And what better place than the racetrack to attract these slightly intersecting groups of characters. The comic heart of the series is a quartet of hardcore gamblers played by Kevin Dunn, Ian Hart, Ritchie Coster and Jason Gedrick, who throw in together to buy a horse and live in adjoining rooms of a motel like they’re the Four Stooges.

The marquee name for the series, of course, is Dustin Hoffman -- in his first television role -- as a man of some means just sprung from prison and looking to find his way back to the track and to casino-owning. He's aided by a loyal driver, played by the solid Dennis Farina. A lot of the story is banter between these two guys, usually before they turn in for the night in a swankier hotel than the Stooges. But Hoffman gets to go deep with his role, especially as the season plays on.

Nick Nolte plays a much more familiar character – the grizzled, horse-loving Kentuckian, a gruff-voiced man of few words who tries to find his own redemption in a fine new horse. Much of his acting comes in grunts and breaths as he mutters and swats himself with the racing form as the horses circle the track.

The jockeys, played by Kerry Condon, the most prominent woman in the cast, and Tom Payne, have their own stories – they're competing for mounts when they aren’t tangling with one another. Milch tries to add some authenticity by including a real-life jockey, Hall of Famer Gary Stevens, to the proceedings.

Among the hangers-on in this world is an agent, played by Richard Kind, with a speech impediment that’s as distracting to the audience as it is to his would-be clients. (But, again: colorful.) Still to come in upcoming episodes are Joan Allen as a horsey romantic interest, Sir Michael Gambon as a malevolent foe, and Mercedes Ruehl, in the finale, as one of the gamblers’ moms.

What keeps these threads tight and advances the action is the input of Michael Mann, who directed the pilot and set the tone for the rest of the nine-episode first season – with alluring neon-tinged looks at the photogenic Santa Anita track, the clouds of frigid air exhumed by horses in the early morning, and especially the killer footage of the racetrack action itself.

Nowhere in Hollywood's long history of horse films has action on the track looked so thundering, so close and so thoroughly involving. The action is so jarring that novices may suddenly -- finally -- understand the appeal of the races to generations.