Sorry, Republicans: It's too late for new presidential candidates 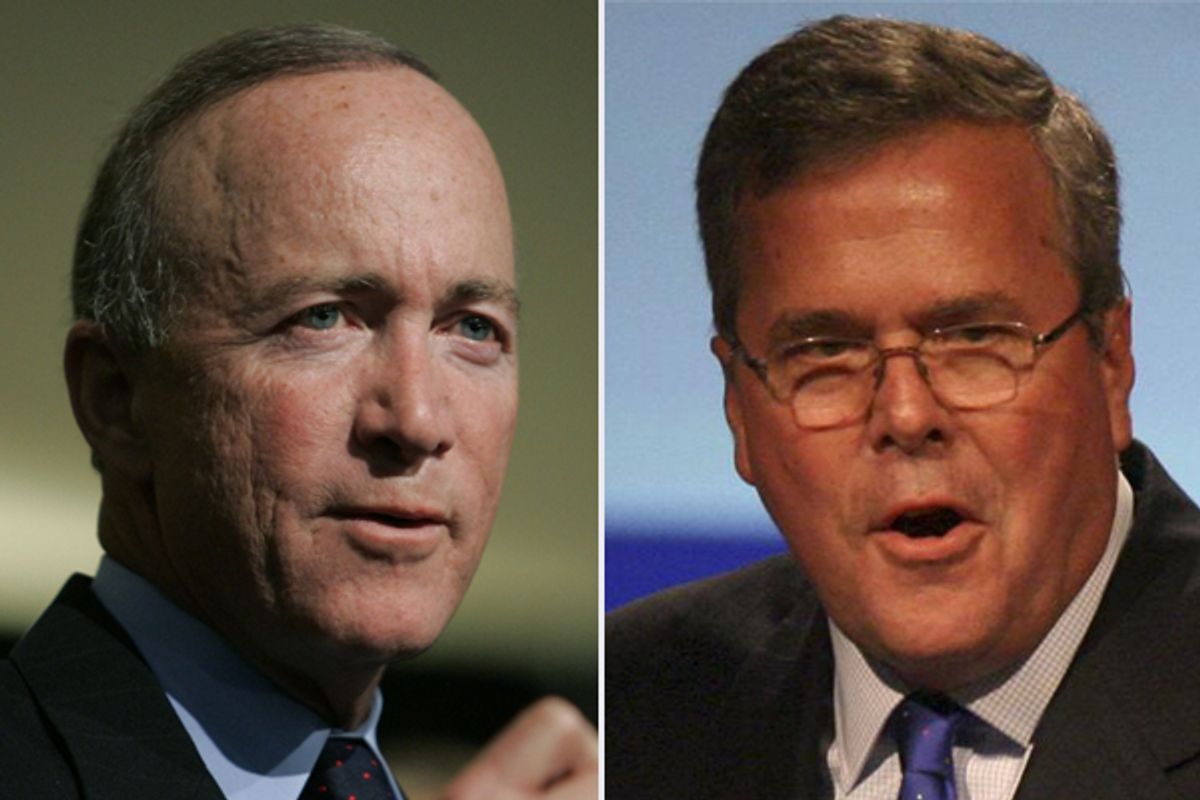 We all owe a great big thanks to political scientist Josh Putnam. Putnam actually went to the trouble of looking up the filing deadlines for all the coming primaries and caucuses in order to see whether it would be possible for a new candidate to enter the Republican presidential race and actually win the nomination. Short answer: Sure, if they entered today and won enough write-ins and uncommitted delegates. But by tomorrow, it would be effectively impossible to win the nomination before the convention.

If the list is constrained more simply to the states where filing deadlines have not passed, the total delegates open to a late entrant drops to 1157. After Tuesday, when Kentucky's (and Indiana's petition -- see footnote 17 above) deadlines pass that total will drop below 1144 to 1066.

A candidate needs 1,144 delegates to win the Republican presidential nomination.

Tomorrow, when Florida votes, the door for any magical new non-Romney (or non-Newt) candidate will have closed. No one will be able to show up and ride a wave of elite and base enthusiasm to the nomination, even if a character who generated that enthusiasm existed instead of being an idle George Will daydream. Mitch "Mr. Excitement" Daniels cannot possibly enter the race now and make it onto enough ballots to win the nomination without taking the fight all the way to the first Republican National Convention without a predetermined nominee since 1976. (A convention that would, as Jonathan Bernstein argues, be "deadlocked" and not "brokered," because there is not much "brokering" possible when each delegate is allowed to vote for whomever he or she likes rather than beholden to a boss.)

Please keep this in mind when you read (and you will read) pundits still imagining or praying for some current non-candidate to enter the race. It would only be possible to win, at this point, by specifically planning to turn the Republican National Convention into an unpredictable free-for-all, something I'm not sure even Ron Paul would be willing to do, let alone some staid figure like Daniels.

Or, for that matter, Jeb Bush, whom Fred Barnes theorizes could "emerge as an acceptable compromise nominee" at the convention, assuming Gingrich has enough delegates to deny Romney the nomination. (His other Bush theories: A VP nod or some sort of vague "kingmaker role" in which he instructs Republicans to select either Romney or Gingrich, and they listen to him, because he ... is a hypnotist? It's not clear.)

Imagine thousands of delegates, free to support whomever they choose at a wide-open convention, all magically coalescing around Jeb Bush as the Republican nominee -- in late August, following months of bruising battle between Newt Gingrich and Mitt Romney -- and then feel free to imagine the outfit you'll wear to Obama's second inauguration.

Newt Gingrich is doing everything in his power to ensure that Mitt Romney will have a difficult time winning the number of delegates necessary to ensure the nomination, but even if Gingrich manages to make good on his threat to drag this out, math has already effectively eliminated the possibility that someone else less insane could take advantage of his work. And the candidates credible enough to make a serious "deadlocked convention" play would be too sensible to attempt it, because the result of denying Romney the nomination would be utter chaos.

There's no white knight. Voters seem to be beginning to realize this, as Jamelle Bouie and Jonathan Chait have anecdotal evidence of conservatives making their peace with Mitt Romney. But even if Romney fails to seal the deal tomorrow, paid professional political analysts should not mislead people into thinking that some unknown person could still make a serious play for the nomination at this late date.