At an opulent annual blowout, bailed-out bankers haze newbies, mock OWS and show just how out of touch they are 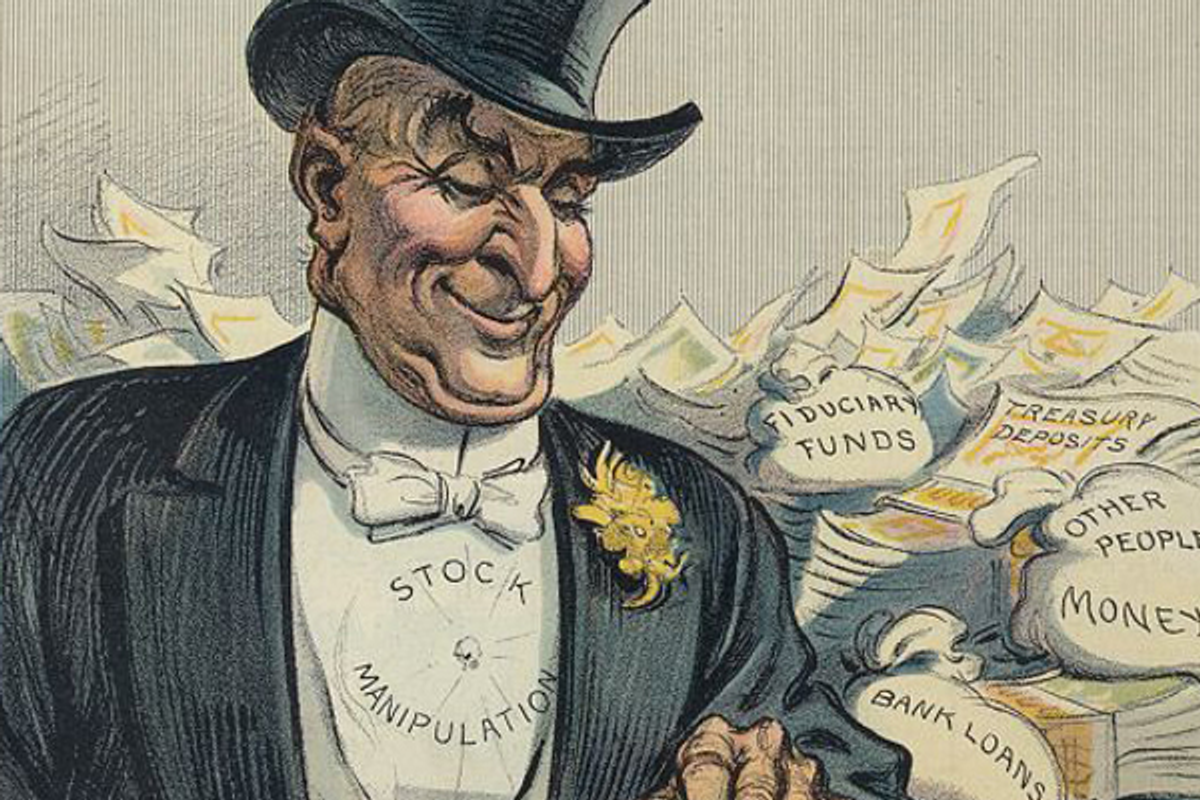 A week or so ago, we read in The New York Times about what in the Gilded Age of the Roman Empire was known as a bacchanal – a big blowout at which the imperial swells got together and whooped it up.

This one occurred here in Manhattan at the annual black-tie dinner and induction ceremony for Kappa Beta Phi.  That’s the very exclusive Wall Street fraternity of billionaire bankers, and private equity and hedge fund predators. People like Wilbur Ross, the  vulture capitalist; Robert Benmosche, the CEO of AIG, the insurance giant that received tens of billions in bailout money; and Alan “Ace” Greenberg, former chairman of Bear Stearns, the failed investment bank bought by JPMorgan Chase.

They got together at the St. Regis Hotel off Fifth Avenue to eat rack of lamb, drink and haze their newest members, who are made to dress in drag, sing and perform skits while braving the insults, wine-soaked napkins and petit fours – those fancy little frosted cakes -- hurled at them by the old guard. In other words, a gilt-edged Animal House, food fight and all.

This year, the butt of many a joke were the protesters of Occupy Wall Street. In one of the sketches, the bond specialist James Lebenthal scolded a demonstrator with a face tattoo, “Go home, wash that off your face and get back to work.” And in another, a member -- dressed like a protester – was told, “You’re pathetic, you liberal. You need a bath!”

Pretty hilarious stuff. The whole affair’s reminiscent of the wingdings the robber barons used to throw during America’s own Gilded Age a century and a half ago, when great wealth amassed at the top, far from the squalor and misery of working stiffs. Guests would arrive in the glittering mansions for costume balls that rivaled Versailles, reinforcing the sense of superiority and the virtue of a ruling class that depended on the toil and sweat of working people.

That’s consistent with the attitude expressed by several of these types after Occupy Wall Street sprung up; bankers told the Times on the record that they could understand the anger of the protesters camped on their doorstep;  but privately, a  hedge manager said, “Most… view [it] as ragtag group looking for sex, drugs, and rock ’n’ roll.”

So sayeth the winners in our winner-take all economy. The very guys who were celebrating at the St. Regis because they were too big to fail. Even when they fell flat on their faces, the government was there to dust them off, bail them out and send them back to fight the class war with nary a harsh word or punishment. Talk about a nanny welfare state.

None of this was by accident. The last three decades have witnessed a carefully calculated heist worthy of Robert Redford and Paul Newman in “The Sting” -- but on a massive scale. It was an inside job, politically engineered by Wall Street and Washington working hand-in-hand, sticky fingers with sticky fingers, to turn the legend of Robin Hood on its head – giving to the rich and taking from everybody else. Don’t take our word for it – it’s all on the record.

The biggest of the big boys was Citigroup, at one time the world’s largest financial institution. When the meltdown hit in 2008, the bank cut more than 50,000 jobs and you and other taxpayers shelled out more than $45 billion to save it. And how are Citigroup executives doing? Nicely, thank you. Last year, its CEO, Vikram Pandit, took home $1.75 million in base salary, and was awarded $3.7 million in deferred stock.

According to the Times, “Citigroup is expected to disclose the rest of his pay, cash, be it upfront or deferred, in March. In addition, while not necessarily for work performed in 2011, Mr. Pandit last year was awarded a $16.7 million retention bonus, plus stock options that could add $6.5 million to the package’s overall value.” Makes you want to cry out, “Retain me! Retain me!”

To be fair, Vikram Pandit was at the World Economic Summit in Davos, Switzerland last week, where he told Bloomberg News, “It’s important for the financial system to acknowledge that there’s a great deal of anger directed at it… Trust has been broken. Banks have to serve clients, not serve themselves.” What’s more, he has said that the “sentiments” expressed by Occupy Wall Street demonstrators were “completely understandable.”

This, in contrast to the financial industry official who told a reporter that the protesters’ issues were “a lot of sound and fury, signifying nothing.” Or, as they used to say while partying down at the court of Louis XVI and Marie Antoinette, let them eat petits fours.