How Obama became vulnerable on Iran

By downplaying his diplomacy, he undermines a peaceful solution and encourages the false charge of weakness 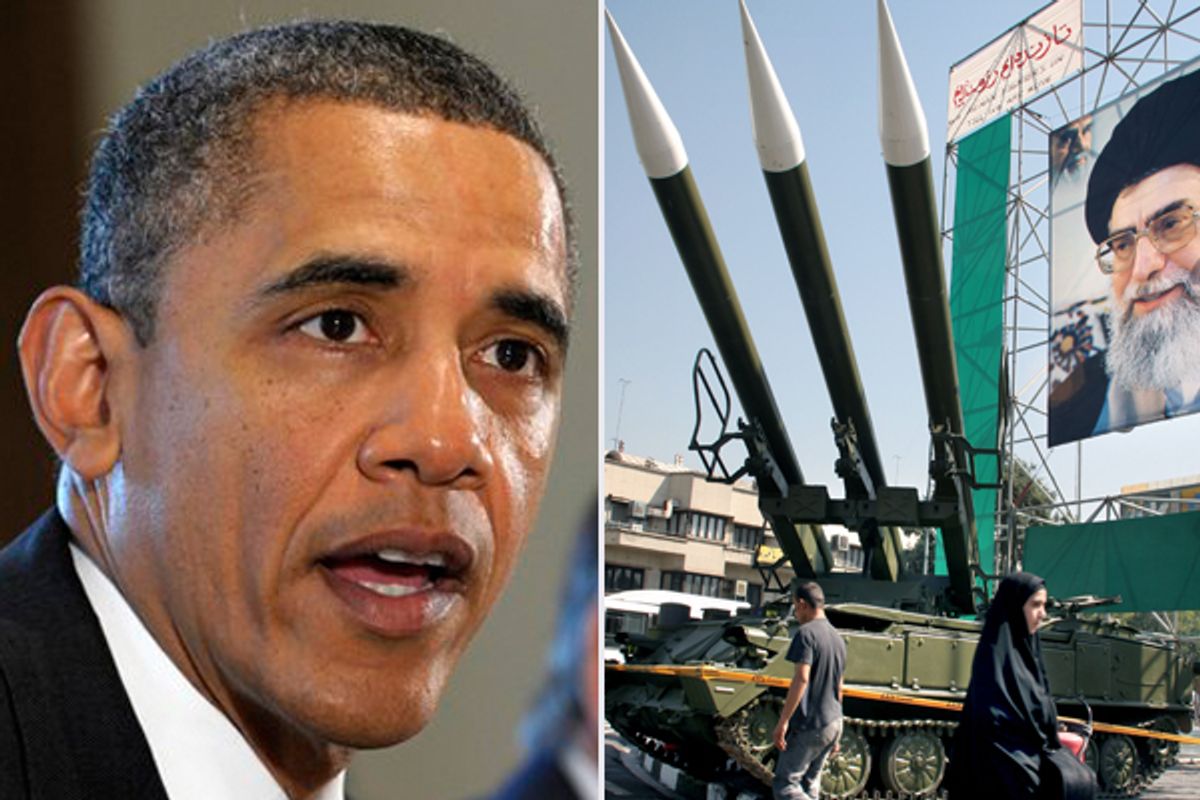 The Republican primary debates have revealed what was long suspected: The foreign policy issue that will dominate the general elections will be Iran. This is not surprising. Iran is the one issue the Republicans (except Ron Paul) can unite on, that enables them to portray President Barack Obama as insensitive to Israeli concerns, and that gives them an opportunity to cast Obama as weak.

Iran was fast expanding its influence in the region during the George W. Bush Presidency. “Iran was on a roll,” one Obama Administration official told me. But in the past three years, it has lost its regional momentum. Iran’s domestic political situation is much more unstable following the fraudulent 2009 elections, its source of soft power in the region has take a hit following the Arab uprisings, its economy is hurting under the crushing weight of government mismanagement and sanctions, and its ability to play the major powers against each other has been severely limited since Obama took office.

Yet, according to a recent Washington Post-ABC poll, Americans disapprove of the way Obama has handled the Iran issue by a 48 to 33 percent margin. This result is well below his overall job performance numbers and significantly worse than the approval ratings for his handling of terrorism and international affairs.

The numbers must have perplexed Democratic operatives. Efforts by the White House to showcase how tough Obama has been on Iran – including National Security Advisor Thomas Donilon’s triumphalist speech at the Brookings Institute in November 2011 – have failed to impress the public.

This can be explained partly by the fact that the Iranian nuclear program has progressed and the growing sense of crisis over Iran. After all, the pressure Obama has imposed on Iran has only brought the US and Iran closer to war and has not led to the resolution of even a single issue of concern.

But it is also because of the Obama administration permitted the Right to define the metrics of success on Iran. Obama has completely bought into the idea that a “strong” Iran policy is one that is tough, punishing and confrontational. As on so many other issues, Obama has permitted the debate to take place on the Right’s turf. In doing so, he has betrayed his own platform of pursuing “smart” rather than just “tough” policies.

The administration’s posture simply doesn’t convey confidence over its record and approach. Rather than standing behind the decision to try diplomacy after eight years of the Bush administration’s rejection of talks, the Obama White House has actively sought to downplay its diplomatic efforts. In spite of the fact that these talks likely would have succeeded in the assessment of many US and Western officials I interviewed had it not been for political infighting in Iran following the election scandal. “The bilateral outreach the Americans made fell victim to internal Iranian politics,” then-foreign secretary of the United Kingdom David Miliband told me.

The Obama administration does not stand up for diplomacy for its sound strategic rational or for the outcome that was sought. Instead, Obama has adopted a defensive posture and argued that his attempt at talking with Tehran failed to secure a nuclear deal but helped bring about unprecedented international backing for sanctions on Iran.

This argument, while technically correct, is the equivalent of defending one’s love for drinking wine, not because of its taste, but because one’s affection for the hang-over. Moreover, it is not compelling since pressure alone cannot make Iran change its behavior. That can only be brought about through diplomacy. Thus, arguing that diplomacy is only good to help bring about pressure only serves to undermine the message that there can be a peaceful resolution to the issue, and provides the appearance that the Administration is just trying to buy time rather than to solve the problem at hand. It’s a posture that doesn’t signal strength or confidence, but rather vulnerability and insecurity.

In fact, this lack of willingness to defend diplomacy or to create the necessary political space to allow the difficult process to succeed is a key reason as to why engagement was prematurely abandoned. As I describe in "A Single Roll of the Dice – Obama’s Diplomacy with Iran," Obama enjoyed unprecedented political maneuverability to pursue diplomacy with Iran when he entered office. But he knew that this window would not last forever. Iran’s nuclear advances and pressure from Congress, Israel and Saudi Arabia would ensure its eventual closure.

While there was initially an inclination to push back against the skeptics of engagement, much of that fighting spirit was lost after the fraudulent Iranian elections in the summer of 2009. The massive human rights abuses committed by the Iranian government shook the administration’s moral confidence and further closed Obama’s political space. “After the elections, skepticism in Congress against our strategy turned to outright hostility,” a senior Obama administration official told me.

Rather than seeking to expand his options and maneuverability, an apologetic approach to diplomacy was adopted based on adjusting to the shrinking political space. By the time negotiations finally could begin in October 2010, the policy had become a gamble on a single roll of the dice. It either had to work right away, or not at all. Once the October talks failed to win Iran’s acceptance for a nuclear fuel swap proposal, diplomacy was abandoned in all but name.

Compare Obama’s handling of the domestic political landscape in pursuit of diplomacy with George W. Bush’s effort to win political support for the invasion of Iraq. Between January 2002 and March 2003, Bush gave 16 major speeches spelling out the (flawed) strategic logic for invading Iraq, in an attempt to create political space and support for his war plans. Bush and Cheney also conducted 11 major interviews with key media to make the case.

Obama, in turn, mainly spelled out the strategic rational for diplomacy when he was a candidate. Once President, the White House’s strategy was to avoid a national debate on Iran. Even when senior Democratic lawmakers offered to provide him with political cover and space, the political circle around Obama advised against it. Though diplomacy had been a winning electoral card in 2008, the assessment in 2009 was that it would be too costly to re-make the case for diplomacy to the American public.

A similar political skittishness exists in Iran, where fear of looking soft on America is as paralyzing as the fear of looking weak on Iran is in Washington DC. Rarely has decades-long enmities been overcome through an approach that adjusts to the very political landscape that has created and perpetuated the enmity. Diplomacy takes time, courage, persistence, political capital and the will to spend it.

Decision-makers in Washington and Tehran should learn from Israel’s former Prime Minister Yitzhak Rabin. Once he was convinced that a peace-settlement with the Palestinians lied in Israel’s strategic interest, he pursued it with ferocity in spite of the domestic political cost (including his eventual assassination.) His rational was powerful and most importantly, unapologetic: "One does not make peace with one's friends. One makes peace with one's enemy."