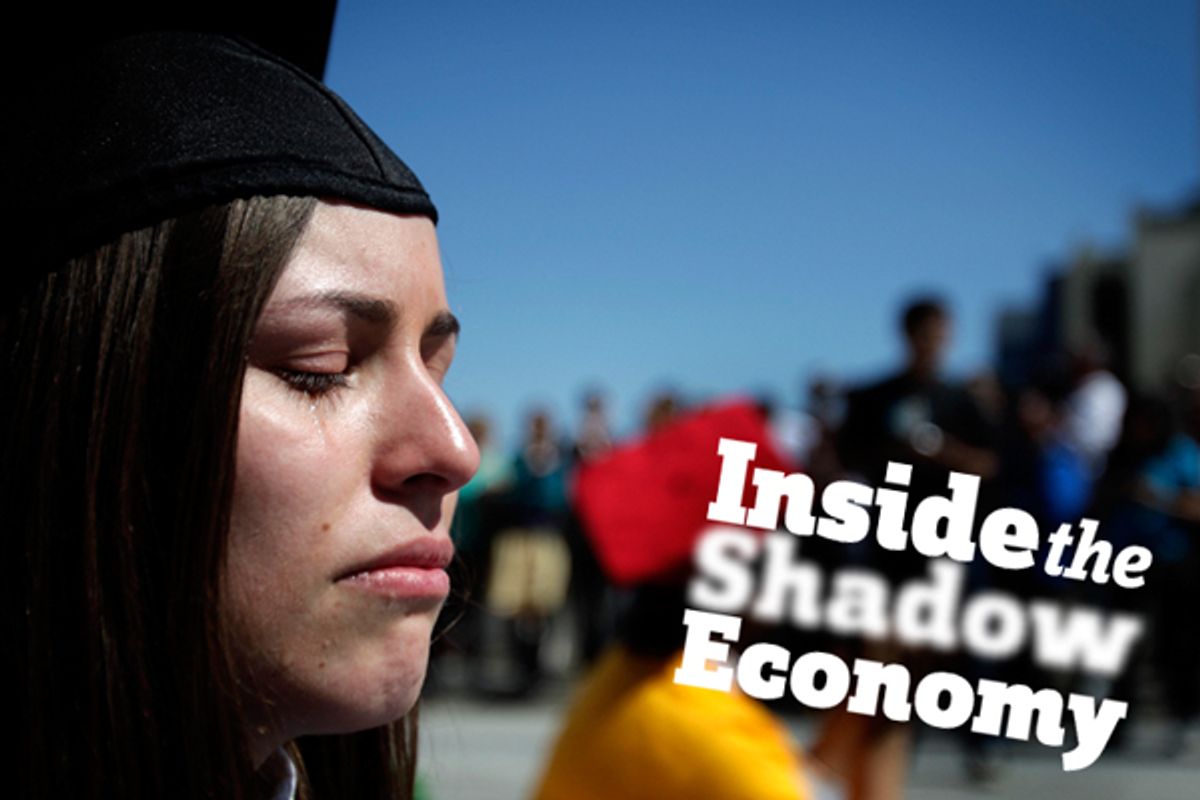 Chalk it up as one of the unexpected consequences of the intense media attention devoted to the Republican presidential nomination race. When Mitt Romney announced his support for the concept of "self-deportation" during a Florida debate last week, reporters instantly shone a bright spotlight on a strategy for removing illegal immigrants from the United States that had hitherto been mostly flying under the radar.

The word "self-deportation" has an agreeable, voluntary ring to it, suggesting that undocumented workers will happily decide of their own free will to return to their home countries, without the necessity for direct government action by ICE agents. The truth is something different: Self-deportation, as practiced today, is supposed to be the only choice left available to immigrants whose life has been made miserable by new, punitive laws put into place at the state level.

Of course, life in the United States is already extraordinarily difficult for undocumented workers. More often than not, non-citizen workers are the mainstay of the shadow economy, the off-the-books underground world where labor laws are frequently unenforced or ignored. In fact, one claim that proponents of self-deportation make is that by reducing the supply of labor willing to work under such conditions, self-deportation (or any other method of cracking down on illegal immigration) will cause the overall size of the underground economy to shrink, and thereby improve the quality of the U.S. labor market.

The limited data available on the impact of new anti-illegal immigration laws doesn't support that thesis. In fact, the opposite may be happening. By making it even more difficult for non-citizen laborers to work in the normal economy, the new laws are pushing some workers even further into the shadows. The harder the crackdown, the more people are going underground. Laws aimed at encouraging self-deportation are just ratcheting up the misery.

Here's what we know. Since the onset of the Great Recession, the number of undocumented workers in the United States has dropped sharply, from a peak of 12 million in 2007 to 11.2 million in 2010, according to the Pew Research Center. At the same time the flow of migrants across the Mexico-U.S. border has severely declined.

There are a number of intersecting explanations for the change in immigration dynamics. The economic downturn is the most obvious -- the demand for labor has plummeted. As Kent Wong, director of the UCLA Labor Center observes, "if you look at the history of migration, it has frequently been influenced by the ebbs and flows of the economy. When there is more economic demand for jobs there will be an increase in immigration patterns, and when there is a shortage of jobs there will be a decrease."

Improvements in the Mexican economy are also probably playing a role in decreasing flows across the border. The enormously stepped up number of deportations under the Obama administration -- around 400,000 annually since 2009 -- is another huge part of the puzzle.

And then there are the state laws passed in Arizona, Alabama and Georgia. Random identity checks, harsher oversight of employers, the creation of "chokepoints" at access points to services like public schools or medical care, are all combining to have a clear effect -- at least insofar as we can tell from such data points as farmers reporting difficulty in finding workers to pick their crops.

Whether those workers are simply going to other states, instead of their home countries, is impossible to know. But on a surface level this is exactly how self-deportation is supposed to work, as spelled out by Mark Krikorian, a longtime anti-immigrant activist,

What would a policy of attrition look like? It would combine an increase in conventional enforcement -- arrests, prosecutions, deportations, asset seizures, etc. -- with expanded use of verification of legal status at a variety of important points, to make it as difficult and unpleasant as possible to live here illegally.

The new laws in Georgia and Alabama are too recent to provide much in the way of hard data on immigration trends or self-deportation. But Arizona has long had a head start on everyone else. In 2007 the state passed the Legal Arizona Workers Act (LAWA). LAWA mandated the use of the national identity and work authorization verification system E-Verify, and imposed sanctions on employers who continue to hire "unauthorized" workers.

In March 2011, the Public Policy Institute of California published a study of the impact of the law. The authors came to two main conclusions: LAWA did achieve "the intended goal of reducing the number of unauthorized immigrants in the state. However, it also had the unintended consequence of shifting unauthorized workers into less formal work arrangements."

One of the authors of the report, Magnus Lofstrom, says that the data show that after the passage of LAWA, there was a substantial increase in the number of low-skilled Hispanic men categorizing themselves as "self-employed." No longer able to obtain jobs with regular wages or salaries, they were forced to hire out their labor on a more ad hoc basis.

"If we compare Arizona to states that had the same kind of employment patterns prior to the legislation passing," says Lofstrom, "we see that in Arizona, for this group of likely unauthorized low-skilled men, the self-employment rate almost doubled in a very short period of time. That is consistent with that concern that the law does push unauthorized immigrants into the informal sector.

"What we've created here with this kind of legislation," says Lofstrom, "is an incentive to shift the relationship between the employer and the employee."

The consequences are unpalatable for anyone worrying about the quality of life of the workers. A higher proportion of low-skilled non-citizen Hispanic men who declare themselves self-employed live in poverty, says Lofstrom, and "a much higher proportion lack health insurance."

Instead of shrinking the size of the underground economy, the combination of slow economic growth with laws aiming to encourage self-deportation is backing workers into a corner, says UCLA's Wong.