The trouble with having no friends

To fight back against Romney, Newt's going to need more than just Sarah Palin and Herman Cain making his case 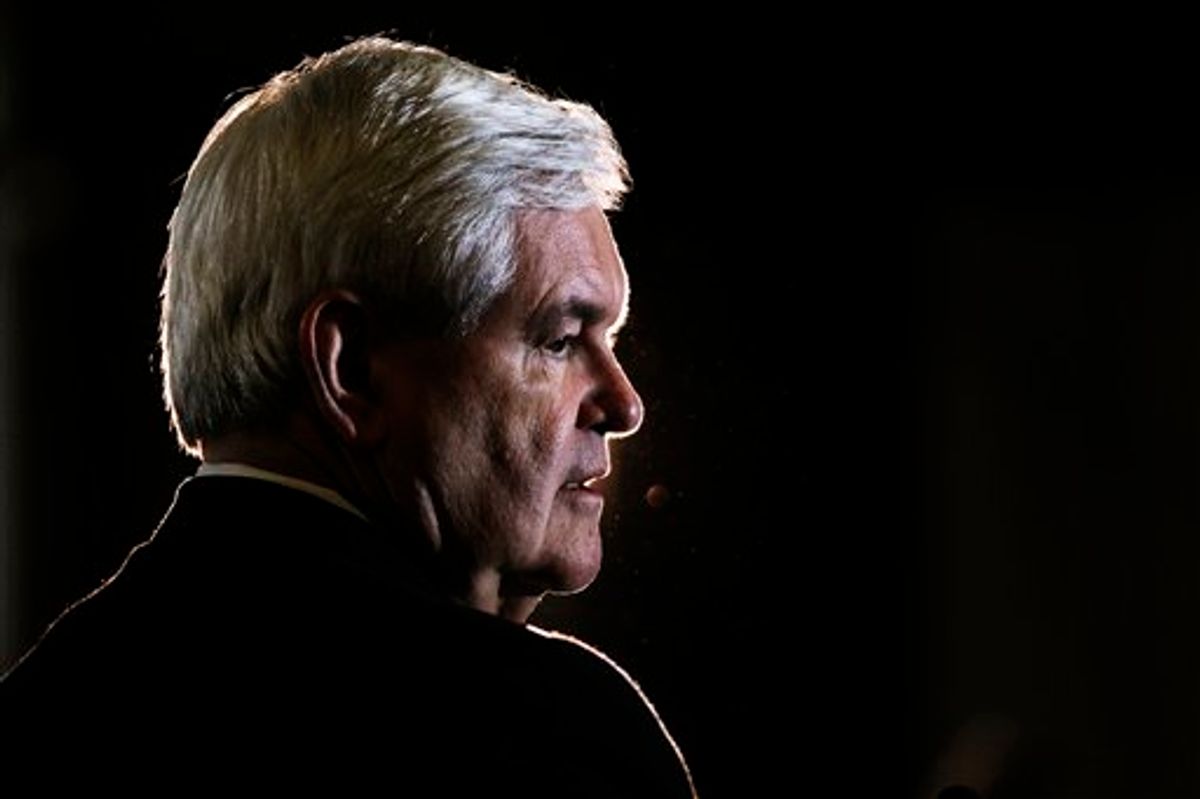 The defeat that Newt Gingrich is expected to suffer in Florida tonight is testament to the fact that, among the Republicans whose public voices matter the most in the party's presidential nominating contest, he just doesn't have enough friends.

As I wrote Monday, the story of Gingrich's Sunshine State demise has a little to do with self-inflicted damage, a lot to do with lavishly funded attacks from Mitt Romney and a pro-Romney super PAC, and even more to do with the readiness of the GOP's opinion-shaping class to echo Romney's assault -- or at least to sit on its hands and mind its own business as Gingrich got mugged. That last factor speaks to the fundamental flaw of Gingrich's candidacy: Too many top Republican voices are too frightened by the prospect of a Newt-led GOP ticket to do anything that might help his nomination prospects.

This is why Gingrich has struggled to attract endorsements from major elected officials, why he's supported by only a scattering of the Republican House members who served with him, and why many of his old colleagues have instead spoken out forcefully against him. It's also why so many of the GOP's opinion-shaping pundits and commentators, particularly those who remember what a political disaster his mid-'90s run as speaker was, have raised their voices to stop him, and why lots of Tea Party-friendly political newcomers -- who might seem like natural Gingrich allies in a race against Mitt Romney -- are keeping their distance.

All of this left the former speaker particularly vulnerable to the attacks he's faced for the past week. If he had an army of prominent, credible conservatives using their platforms to rebut accusations from the Romney crowd and to launch a counterattack, Gingrich probably wouldn't have bled nearly as much support. Rank-and-file Republicans would have heard voices they know and trust urging them to ignore -- or even to be offended by -- the Romney assault. As Jonathan Bernstein explained:

Imagine, for example, if Rick Perry had done well and it was a Romney/Perry race, with party leaders splitting between them but believing both were acceptable. I strongly suspect that if Romney went all scorched earth against Perry in that scenario that many neutral party leaders would start talking about how Ronald Reagan never ran a negative ad in his life (doesn't matter if it's true or not) and about how Romney should dial it back some. They might also quietly warn Romney that if he didn't cut back that he'd feel the consequences in fundraising and other resources. Meanwhile, Perry would have plenty of surrogates to go on every Fox News program to knock the ads down, and those surrogates would have a very sympathetic hearing much of the time.

If there's a glimmer of hope for Gingrich, it's that he has gotten some meaningful help from friends in the final days of the Florida campaign. Most notably, Sarah Palin has rallied to his defense, bemoaning the party establishment's "Stalin-esque" attempt to "crucify" him and urging Florida Republicans to "vote for Newt: Annoy a liberal!" Palin weighed in on Gingrich's behalf before South Carolina, and then as now she refrained from formally endorsing him, insisting that she was mainly interested in extending the process and avoiding the speedy coronation that a Romney victory would produce. Still, her pronouncements have been picked up and amplified by both conservative and nonpartisan media outlets -- injecting a pro-Newt (or at least anti-Mitt) message into the mix. It's helpful to Gingrich, but also a reminder of what he's been missing.

Herman Cain also gave him a boost with his surprise Saturday night endorsement. Again, the value of this had to do with free media exposure -- in place of more attacks from Romney and his allies and more news about Gingrich's polling slide, here was a story about a prominent conservative heaping praise on Gingrich. Fred Thompson, who endorsed Gingrich last week, also spoke up for him as the Romney attacks intensified, and the right-wing news site Newsmax seems to be promoting the Gingrich cause. Rush Limbaugh might qualify as a friend of the Gingrich campaign at this point; he regularly voices frustration with the former speaker, but -- like Palin -- he continues to call for a lengthy battle for the nomination.

If the polls are at all accurate, none of this will be enough to reverse the Romney tide and produce a Gingrich upset in Florida. But Gingrich is vowing to press ahead and take his candidacy all the way to the convention. If he's going to have better luck in the next wave of contests, he's going to need a lot more friends who are willing to speak out on his behalf.

I was on MSNBC's "The Last Word With Lawrence O'Donnell" on Monday night talking about Gingrich's path forward after Florida. Here's the full segment: