Where are the books?

There's nothing like a good read to pass the time when flying. So let's get some proper bookstores at our airports 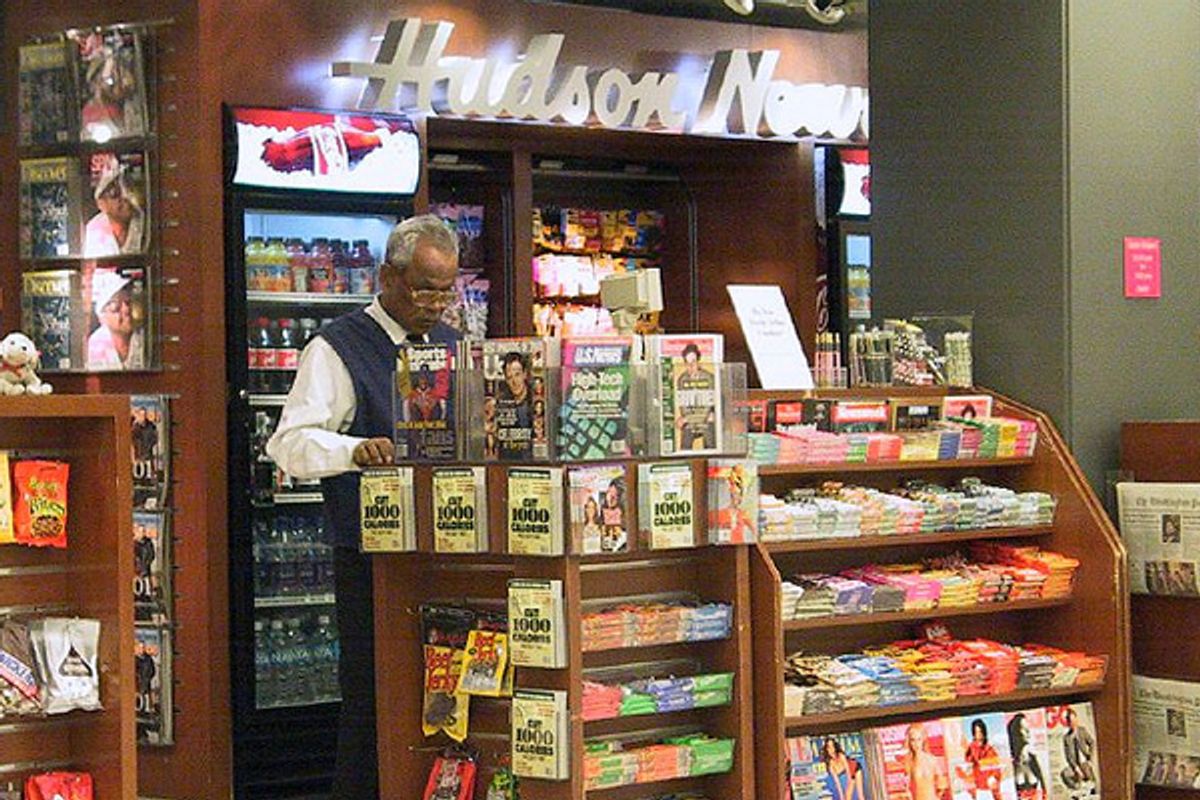 Why, then, is it so bloody hard to find a proper bookstore at an airport? Not all of us pre-load our reading material on a Kindle.

I was in Detroit the other day. The terminal at DTW is one of America's best, and the mile-long concourse is jammed with retail shops. But do you think I could find a book in there? If I wanted a diamond bracelet, a $300 Tumi briefcase or a cup of gourmet coffee, on the other hand, no problem.  But a book?

Not long ago almost every major airport had a proper bookseller. Nowadays they are harder and harder to find. Usually, what passes as a bookstore is really just a newsstand. The vast majority of these outlets are owned and controlled by one of two companies: Hudson Group and an Atlanta-based company called Paradies Shops Inc. Both conduct business under numerous sub-brands that hawk a very thin selection of bestsellers, business books, thrillers and pop-culture trash.

The terminal guide at DTW told me there was something called Heritage Books -- two of them, in fact, one at either end of the hall. That got my hopes up. Maybe I'd score a copy of Gary Shteyngart's new novel.

As they say, good luck with that. Turns out that Heritage is just one of those Paradies Dba franchises.

They did stock a copy of Jonathan Franzen's novel "Freedom" (yet not "The Corrections," which was much better), and obviously no retailer can get by without a token Malcolm Gladwell or two, a gesture to the "sophisticated" reader who is seeking something headier than "American Sniper," or the latest Suze Orman guide to success, or one of two -- two! -- books by Chelsea Handler.

I couldn't get out of there fast enough.

On the bright side, though, am I correct in observing that America's fascination with Sudoku has begun to taper off?

Lingering resentment, yes. Several years ago I nearly had a nervous breakdown trying to get Paradies and Hudson to stock my own lousy little book, "Ask the Pilot -- Everything You Need to Know About Air Travel." I was stupid enough to think that the airport, of all places, might be a good selling point for a book exclusively about air travel. I'll never make that mistake again. It was carefully explained to me that, no, it matters not what your book is about, captive audience be damned. What matters is getting on the company's shortlist of airport-worthy bestsellers, or having your publisher pay for an airport promotion. Hudson carried "Ask the Pilot" briefly, into the fall of 2004, after which it disappeared from airports forever.

All of airport retailing, though, seems to suffer from a kind of dementia. This is something I explore in my famous essay, "What's the Matter With Airports?" Enough already with the jewelry, the souvenir sweat shirts, the remote-control helicopters and the high-end luggage.

(The fixation with luggage is particularly strange to me. Who in the world buys luggage * after * they get to the airport? No wonder these places are always empty.)

How about something practical instead? Like a halfway decent bookstore.

Getting back to the positive...

Thanks to the many readers who contributed to my "Hidden Airport" collection. The idea, for those of you who missed it, is to highlight spots of unexpected pleasantness at U.S. airports. I showcased two: the garden adjacent to the Marine Air Terminal at New York's LaGuardia, and the connector walkway between terminals B and C at Boston-Logan.

Several of you wrote in with pictures and descriptions of other little-knows oases. For example, the SFO Aviation Museum and Library at San Francisco International. But my favorite so far, I think, is the sculpture garden at the Greenville-Spartanburg (GSP) airport in South Carolina.  You can view it here in this interactive panorama put together by reader John Riley.