Where does the anti-SOPA movement go next? 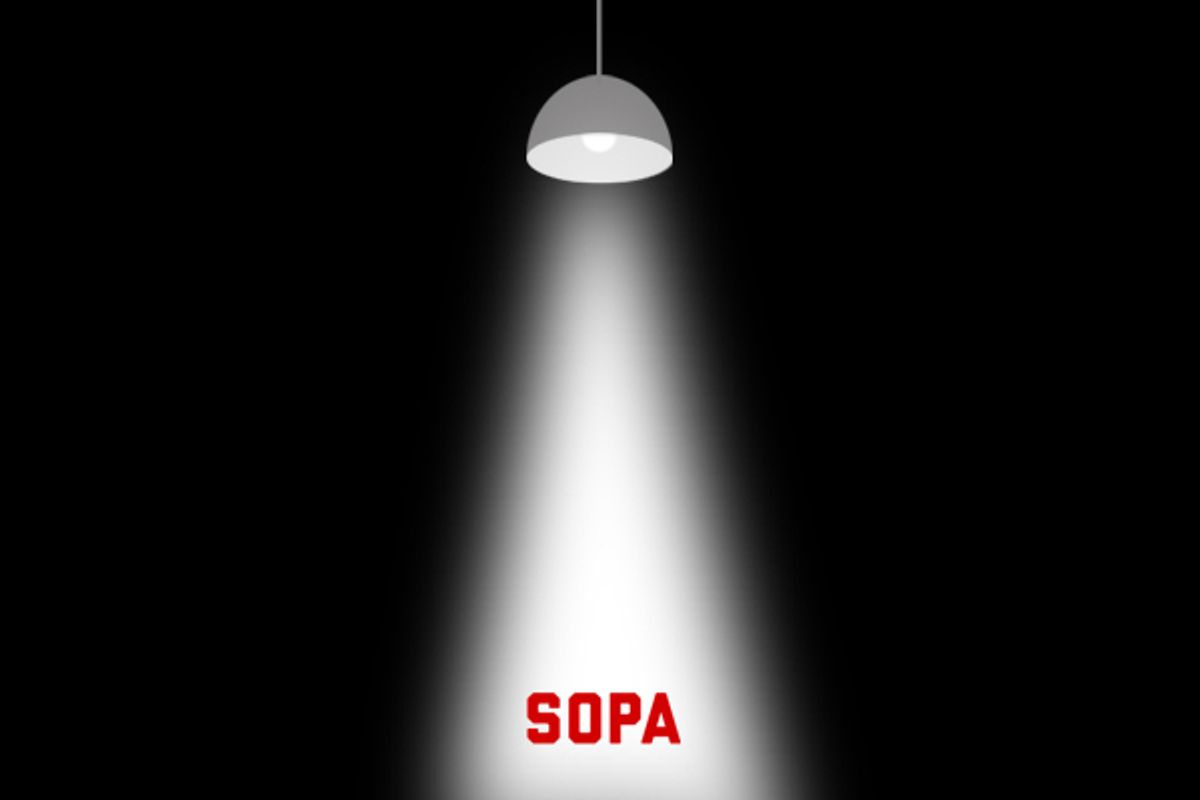 The last few weeks have witnessed a remarkable convergence of conflicts over copyright: the arrest of Megaupload mastermind “Kim Dotcom” in New Zealand, an unprecedented show of unity among Internet giants such as Wikipedia and Google to fight anti-piracy legislation in Congress, and similar protests in Poland against new copyright measures.  In a world wracked by recession, war and revolution, a topic oft-dismissed by journalists as “arcane” — copyright — has surged to the top of the political agenda.

Indeed, supporters of anti-piracy legislation in Congress have confessed their ignorance of how copyright and the Internet work, saying the details were best left to the “nerds.” Lawmakers soon heard from the nerds, though, as an online insurgency spread to thwart the Stop Online Piracy Act, galvanizing opposition across the political spectrum in a novel way, from the Creative Commons left to right-wing blogs such as RedState. The campaign epitomizes a promising new turn in American politics, as critics of intellectual property law finally find an audience and, more important, the makings of a political constituency.

It was not always so, to say the least.  Advocates of stronger copyright won an almost unbroken string of legislative and political triumphs since the early 1970s. A burst of piracy in the late 1960s, stimulated by the ease of recording on magnetic tape and the appearance of bootlegs of Bob Dylan and the Beatles, prompted Congress to extend protection to sound recordings in 1971.  Thus began a continual expansion of the powers of copyright, with the term of protection extended from a maximum of 56 years to the life of the author plus 50 years in 1976, and another 20 years added in 1998.

Entertainment industries argued they needed protection.  In a deindustrializing economy, they were job creators, net exporters of American goods.  Disney reps in the early 1980s warned Congress that movie piracy would undercut jobs and tax revenue. With trademark bombast, Hollywood lobbyist Jack Valenti declared in 1982, “We are going to bleed and bleed and hemorrhage, unless this Congress at least protects one industry that is able to retrieve a surplus of trade and whose total future depends on its protection from the savagery of this machine.”  (He was lobbying against the dreaded VCR.)

Meanwhile, opponents of stronger copyright had little to offer.  Most were tape duplicators, who built their businesses on copying records and making mixtapes.  These “pirates” urged Congress and state legislatures not to extend the length of copyright or bolster the power of rights-holders, but lawmakers paid them little attention.

Only with the rise of a new generation of copyright critics in the 1990s did a credible resistance emerge.  Academics such as Lawrence Lessig, Kembrew McLeod and Siva Vaidhyanathan pointed out how excessive copyright protections allow corporate behemoths to push around small competitors while stifling creativity, such as mashups and sampling in hip-hop.

At first, this critique remained limited to a small constituency of tech activists, artists and academics.  But Duke law professor James Boyle offered a prescient diagnosis of the movement’s problems in 1997, when he urged an “environmentalism for the net.” Environmentalism became one of America’s most vital and broad-based new political movements in the late 20th century, but its influence was initially limited.  Scientists and nature lovers worried about environmental degradation, but they faced a difficult challenge persuading others that individual issues — a dam in a public park, suburban sprawl, pollution — were connected in a way that demanded broad public concern.  The idea of the environment encompassed many issues that were different but related.

Critics of copyright, Boyle suggested, needed to theorize about the public domain in the same way nature lovers conceptualized the environment. They needed a framework to explain how intellectual property affected the people as a whole, and not just the librarians, musicians or teachers who might run up against the limits of copyright.  For instance, a handful of polluters might benefit richly from easing clean air standards, while exposure to carcinogens hurts the broader population in a diffuse and indirect way.  Similarly, lawmakers were reforming copyright law at the behest of those who stood most to profit from it — entertainment industries — but at the cost of impoverishing a public domain that most people thought little about.

The last decade reveals how an anti-copyright movement emerged along the lines laid out by Boyle. Efforts to curb copying on the Internet sparked a new consciousness that copyright was not merely an abstract or remote issue, relevant only to lawyers and movie studios, but a palpable everyday concern.  The Recording Industry Association of America stirred outrage by picking on 12-year-old girls and college students for file-sharing, but such indignation only pointed the way to a more comprehensive awareness of the public domain.

The assertion of powerful resistance to SOPA may signal the moment when a new American constituency begins to question copyright. Members of Congress who are normally happy to give Hollywood whatever it wants began to abandon the legislation, as voters roared their opposition and sites such as Wikipedia coordinated an effective blackout.  Critics of SOPA succeeded in changing the subject from property rights and stealing to a discussion of sharing and freedom, reviving the old idea that citizens had an interest in a vibrant and free public sphere above and beyond protecting the profits of rights-holders.

Why the (seemingly) sudden change?  Wikipedia, no doubt, offers a model of nonprofit public service and “peer production” that stands in stark contrast with the self-serving image of a pirate. “Imagine a world without free knowledge,” the site said, emphasizing the social good of sharing information. And it cannot be stressed enough that today’s conflict over copyright has broken down as a battle between different sectors of big business, with Google and Facebook squaring off against companies like Disney, which favor the strongest possible property rights.  The tech-vs.-content divide makes this struggle different from earlier legislative fights, when opponents of pro-copyright measures had few friends with deep pockets.

Where the debate goes from here is hard to say, but the broad alliance between academics, bloggers, big tech and everyday Internet users has already achieved an unprecedented victory by rolling back proposed anti-piracy laws.  The recent arrest of Megaupload’s Kim Dotcom, however, threatens to complicate the picture.  With his flashy cars and lavish lifestyle, Dotcom represents perhaps the worst-case scenario for free information — a handful of individuals getting ridiculously rich off other people’s work.  In fact, he may resemble too closely the older image of the sleazy record execs who lived the high life by exploiting artists.  This is certainly not the image that advocates of sharing and free expression want as their poster child.

For such an anti-copyright movement to succeed, though, the focus must remain on free speech, not on the profits of Disney or Dotcom. Free culture could just be a case of “new boss, same as the old boss,” if a new breed of middlemen at file-sharing sites were able to profit from trafficking in other people’s work.  Sharing is one thing, but when money changes hands it is quite another; few people think that inserting a photo of Richard Nixon or Newt Gingrich into my blog post is hurting anyone, since the original photographer or website that hosted the image is no worse off, and I am not trying to make money by blogging. Fair use may protect such practices, though that protection is by no means certain — copyright trolls such as Righthaven enjoy a brisk business threatening websites with infringement lawsuits in order to force them into out-of-court settlements.  The anti-copyright movement must fight to preserve the zone of noncommercial copying and sharing that fair use is meant to protect from such attacks.

It must also offer solutions.  There must be a way of reconciling practices such as sampling and file-sharing with copyright law that is not solely designed to enhance the power of rights-holders.  Creative Commons already offers licenses that creators can use to selectively permit copying and sharing of their work, while YouTube has developed a kind of “opt out” model that removes copyrighted material when rights-holders object (but still hosts a vast number of unlicensed TV clips, concert recordings, and so on).

American history also offers guidance for policy. For instance, Congress forged a novel compromise between songwriters and record companies when it considered how to regulate sound recording in 1909.  Composers and music publishers wanted to license their songs individually, charging whatever the market would bear, while labels wanted a free supply of songs to record on piano rolls, wax cylinders and discs.  The solution — known as a compulsory license — balanced both interests by making record companies pay composers a flat royalty for each copy (i.e., recording) of a song they produced.  Thus, performers and labels could choose whatever songs they wished to record without the burden of negotiating a price for each song individually, and composers were ensured an income from the sale and enjoyment of their works.

Lawrence Lessig and others have called for a similar compromise for file-sharing.  In this way, we could look at file-hosting services such as Megaupload and Rapidshare as a kind of radio.  DJs do not have to call up Moon Unit to get permission every time they want to air a Frank Zappa song; instead, they pay for blanket licenses from composers’ organizations such as ASCAP and play whatever they like.  Likewise, file-hosting services could negotiate a formula to compensate for the copyrighted content users upload and download. Such an arrangement would raise issues of privacy and fairness, but a blanket license scheme offers one possible way for Internet users to go on freely sharing and creators to be paid.

Critics such as Boyle and Lessig have never been truly anti-copyright; they simply believe the law has become too skewed in favor of rights-holders.  In the 1970s, for instance, record industry lobbyists rejected a compulsory license for recordings, which could have set a flat price for using copyrighted sounds in mixtapes and samples.  The result was a process for obtaining permissions that is so cumbersome and costly that many musicians choose not to use samples. With an eye toward innovation and compromise, we could create a system that facilitates sharing, copying and free exchange without shortchanging artists or surrendering to the interests of big business.  A new movement must sustain a vision of sharing that serves the public good if it is to succeed in changing the conversation about copyright. Thwarting quick passage of SOPA was just a start.

Alex Sayf Cummings is an assistant professor of history at Georgia State University and the author of the new book "Democracy of Sound: Music Piracy and the Remaking of American Copyright in the 20th Century." He is also a co-editor of the blog Tropics of Meta.